THE BOOK OF SKULLS by Robert Silverberg 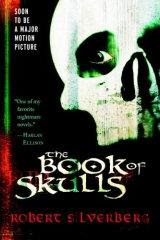 It’s the last week—actually 10 days—of the semester, and I am very, very busy again. I have a paper, four exams, a group project and the other sundry items that make up a college course. Which means that this week is going to be a little light here at Gravetapping, but I will get a few posts up—my goal, as always, is three.

The first post of the week is a reprint of a review I wrote for SFReader in 2006. The Book of Skulls is a short science fiction novel written by Robert Silverberg in 1972. It was recently republished by Del Rey in trade-paperback, and it is a title I very much recommend.

Eli, Ned, Timothy and Oliver are college roommates. They are seniors, and looking for a little adventure before they matriculate into the real world. Eli, a scholar of language, finds an old manuscript in the college library archives. It’s hidden in an old dust covered box where it was buried decades earlier. Eli is the first person to see it, to translate it, in a hundred years. It is called The Book of Skulls and it describes a ritual and a brotherhood that promises eternal life.

When Eli locates what he believes to be the House of Skulls--the home of the ancient brotherhood described in the manuscript--in the arid desert North of Phoenix, Arizona, the four friends make an agreement. They will pledge themselves to the brotherhood and seek immortality no matter the cost.

The college friends set out on the cross-country journey during their final Spring Break. They have ten days before class is back in session, and each in their own way will find the answers to life. They will discover just how far the human spirit will go to assure its own survival, and they will face their own demons in a struggle between belief and cynicism.

The Book of Skulls by Robert Silverberg is difficult to categorize. It is part horror, part science fiction, part fantasy, and part adventure, but no matter where you put it on the bookshelf, it is a finely rendered and meaningful novel. It is written in first-person--the viewpoint shifts between the four boys, almost as though they are writing in a journal. They each have their own unique and obvious voice; you can fill the shift in tone, vocabulary and attitude with every transition of viewpoint. Eli is the scholar, Ned is a poet, Oliver is the driven Midwest kid pulling himself out of poverty, while Timothy is the heir to a wealthy New England family.

This novel was originally published in 1972, and its moral designs and story is very much a product of its time. One can feel the struggle of the old line against the new--the Vietnam War, civil rights, free love, and the individuals search for place and meaning in a chaotic maelstrom of impending change and re-change. While The Book of Skulls is a product of its time, it has lost little of its power or magic. The issues are the same: friendship, loneliness, corruption, fear, and death.

Robert Silverberg has created a minor masterpiece of strange fiction. It is more than just a science fiction story: it is a story about the human condition, cynicism and belief, love, hate and death. This is what popular fiction is supposed to be: quick, witty, unrelenting, meaningful, exploratory, and believable. I really liked The Book of Skulls, and I bet you will too.
Posted by Ben Boulden at 6:12 PM