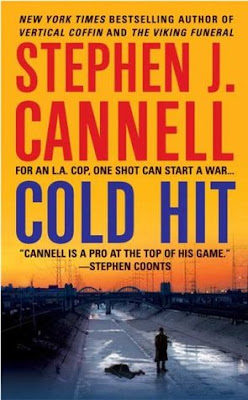 Cold Hit (2005) is Stephen J. Cannell’s fifth novel featuring LAPD Detective Shane Scully and the second I’ve read. The first title I read, On the Grind (2009), was disappointing in its lack of depth, character development and over-easy plotting, but Cold Hit is a top-notch police procedural that renders a fully-realized Shane Scully. A complex plot with more than one surprise, and an alluring Southern California setting.
Shane Scully and his partner Zack Farrell are the primary detectives on a series of killings targeting homeless men. After the victims are killed with a bullet to the head, their finger-tips are removed and a symbol is carved into their chests. With the case going nowhere—no suspects, witnesses, clues, or the victims’ identities uncovered—the LAPD’s brass are threatening to remove Scully as the primary detective and form a multi-agency task force to continue the investigation.

Cold Hit is a nicely developed, finely plotted, character driven procedural. It has a sense of the believable from the police investigation to Scully’s relationships with his partner—drowning in alcohol and divorce—and his family. He is likable, something of a maverick who struggles against authority, and tough without being super human. The investigation deepens into the realm of national security and there is an interesting discussion about the post-9/11 world’s enhanced federal law enforcement powers without the story losing its appeal or momentum. Even better, it made me want to read another Shane Scully novel.

I read ON THE GRIND and thought it bit the moose. I never tried another Cannell book after that. Maybe I should, though.

This is pure speculation on my part, but as I read Cold Hit I wondered if Mr. Cannell was ill when he wrote On the Grind because the two books are miles apart on the quality spectrum. It seems like he died a year or so after its publication.

Thanks for the review and recommendation, Ben. I'm sure to like this novel, though Shane Scully's character-description sounds all too familiar. Why can't police detectives and private investigators have normal family lives?

Prashant, The funny thing about this one. Scully's home life is amazingly nice. He and his wife get along great. He has a son who is about to get a scholarship to UCLA (and every time Scully needs to do parenting he knows exactly what to say and his son takes it to heart). A life I want, but his partner is at the other end of the spectrum. A drunk, divorcing with children who despise him.