The Name of the Game is Death / One Endless Hour by Dan J. Marlowe 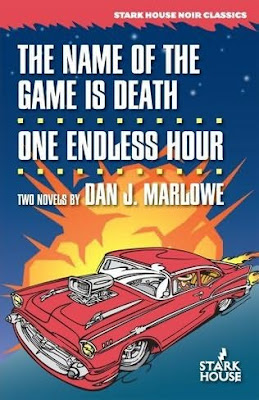 Dan J. Marlowe.  The name alone brings an echo of the hardboiled—


“I’ll be leaving one of these days, and the day I do they’ll never forget it.”

He wrote in the heyday of the paperback original.  His best work was published by Gold Medal, and his novels stand above most of his contemporaries as hard, uncompromising masterpieces of hardboiled crime and suspense.

His life was as strange as his fiction: he is likely the plainest womanizer exported by Massachusetts; he gambled professionally for several years; he befriended, lived with, and co-wrote several short stories with the notorious bank robber Al Nussbaum; and late in life he developed memory loss and something called aphasia—“partial or total inability to write and understand words.”

And all that is only the beginning.  Not to mention it was parroted from the introduction, written by Marlowe’s biographer Charles Kelly, to the new trade paperback double published by Stark House Press.  It features two of Marlowe’s best novels, which really, are two halves of a single story: The Name of the Game is Death (Gold Medal 1962), and One Endless Hour (Gold Medal 1969).

The novels tell the genesis story of Marlowe’s Earl Drake series character.  Drake is not a likable man.  He is a bank robber with a predilection for killing people.  He doesn’t kill simply to kill, but kill he does.  The Name of the Game is Death opens at the scene of a botched bank robbery with Drake shot in the escape.  He and his partner split up, and Drake finds a doctor and a dark place to hide until he is recuperated and the heat is off, which is when the story really begins.  His partner went missing with the money, and Drake is broke.  The rest of Name of the Game is Drake’s search for his partner, and the money, and One Endless Hour is the fallout.

Name of the Game is the stronger of the two novels.  It includes an exposition of Drake’s childhood, explaining (without apologizing) for Drake’s seeming amoral character.  Its backstory emphasis and character development is reminiscent of John D. MacDonald, but only just.  Its prose is raw and hardboiled—


“I swear both his feet were off the ground when he fired at me.  The odds must have been sixty thousand to one, but he took me in the left upper arm.  It smashed me back against the car.  I steadied myself with a hand on the roof and put two a yard behind each other right through his belt buckle.  If they had their windows open they could have heard him across town.”

—and it is more thematically related to Jim Thompson than John D.

One Endless Hour is more of a straight caper novel.  It lacks Name of the Game’s character development, and backstory, but it flashes pure action.  And, if you consider the two novels as one story, it is the climactic resolution.  The differences in pacing and plotting act to strengthen the two novels’ impact rather than diminish it, and the new Stark House edition is the perfect way to experience the story arc.