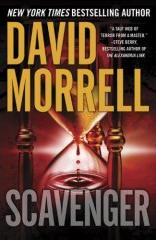 The artwork for David Morrell's latest novel Scavenger has finally been released. (See right.) It is an extension of Creepers, and it is getting rave reviews. I'm hoping SFReader gets a review copy, and soon. Booklist gave it a starred review, and in part said, "Morrell has a reputation for smart, tightly written, genre-bending fiction, but here he exceeds himself, producing a superbly entertaining novel that will attract readers from multiple genres."

I know you have been waiting all year to read my best of 2006 list, and so to satisfy your hunger, here it is. But first, a few remarks: 1) These titles weren't necessarily published in 2006, but rather I read them in 2006; 2) I tend to re-read some of my favorite authors / titles, and to keep the list fair, a book has to be new to me to be included; 3) I completed fifty books this year, down from 77 last year, and 75 the previous year--a slump, or am I just busy? The latter, I think.

Drum roll, please. And picture your favorite celeb at the podium in their best dress / tuxedo with a modest smile and outrageously expensive haircut. Ready? Here goes. (They are listed in descending order, and order in this case does matter.)

5) Tyrannosaur Canyon by Douglas Preston. This was a two day wonder. I opened, I read and I damn near couldn't put it down. Damn sleep, damn school, damn work. Preston is best known for his collaboration with Lincoln Child, but Tyrannosaur Canyon is all Preston, and I liked it as well, and better than most, of his collaborations. The action is swift, the characters are likeable, and the story is sharp. I was disappointed when this one ended.

4) Caught Stealing by Charlie Huston. This is the first installment of Huston's Hank Thompson trilogy, and it rocks. If you want cool, Huston writes it. If you want adventure, crime, violence, scary-as-shit suspense, Huston writes that, too. Start at the beginning, and read them all.

3) The Narrows by Alexander C. Irvine. I read this one for SFReader, and I loved every minute of it. It is an urban fantasy / historical novel set in World War 2 Detroit. Irvine's descriptions of the city feel so real you can almost hear the slightly disgruntled baseball fans watching the Tigers lose again and again, and even better you can damn near smell the hot dogs and beer. If you like historical novels, fantasy, or just great story-telling read this book.

2) An Obituary for Major Reno by Richard S. Wheeler. I read this book in January, but its images of a haunted Major Reno and his role at the battle of the Little Bighorn is still fresh in my mind. Wheeler takes the much maligned Major Reno and gives him a face, a life, and allows the reader to observe the man as a man, rather than a scape-goat. Richard Wheeler is a master of the western story, and this book very well may be his masterpiece.

1) The Crimes of Jordan Wise by Bill Pronzini. Pronzini is a master of the mystery, and while his Nameless Detective series is terrific, I always look forward to his stand alone novels because they have an atmosphere and tension that set them apart from his series books. The Crimes of Jordan Wise is part crime novel and part philosophy. The action is there, the atmosphere is sharp and haunting, but the story peels away to reveal something far deeper. My only wish is that more people read Pronzini. And he wrote several dozen a year.

Well, there you have it. For better or worse, was it worth the wait?
Posted by Ben Boulden at 4:31 PM No comments:

You may have noticed, or not, that my blog has been sadly desolate the past few months, but I'm back now. I think. I finished finals last week on one of the most intensely rigorous semesters of my college career and now, for another two-plus weeks, I'm free. Wooohooo!

I can't guarantee anything, but I'll try to get several posts online and in the ether over the next several weeks, and hopefully keep it up once spring semester brings more pain and demands into my life. Happy reading.
Posted by Ben Boulden at 3:19 PM No comments:

Masters of Horror--Incident On and Off a Mountain Road

Masters of Horror -- Incident On and Off a Mountain Road 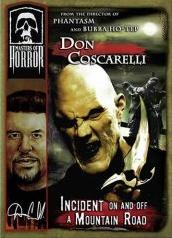 I recently discovered--or more aptly put, remembered--the Showtime series Masters of Horror. I know nothing about the actual series, other than it was created and is produced by Mick Garris, and airs on Showtime; I'm one the remaining three or four dozen people without a cable or satellite connection in my home. (It's expensive, and hell, it leaves me more time to read.)

I have, however, been watching the individual episodes as they are released on DVD, and while the series is a little uneven, a few of the episodes have been terrific. One such episode is, Incident On and Off a Mountain Road. Incident is based on a short story written by Joe R. Landsdale and directed by Don Coscarelli, who also directed the wonderful Bubba Ho-Tep starring Bruce Campbell, which also just happens to be based on a Joe Landsdale story.

Incident is a tour-de-force horror film. It is part slasher, part psychological thriller, and completely and outlandishly entertaining. The cinematography is beautiful, the acting is better than competent, and the direction is great. Incident On and Off a Mountain Road is very nearly the perfect horror film--its length, at just under an hour, is ideal for the story, and the story is told with a sharpness and style that slasher films rarely exhibit. While I have never read the Landsdale short story on which Incident was based, I can only bet the film served its interpretation well, and I hope, oh how I hope, to see Coscarelli and Landsdale team-up again. Rumor has it, they are in the process of putting together a sequel to Bubba Ho-Tep.

While the DVD-version of Incident On and Off a Mountain Road is a little overpriced at $16.98, you should make an effort to find it in a library or at your local video store. It's well worth the rental fee. At least, I think it is.
Posted by Ben Boulden at 2:42 PM No comments: