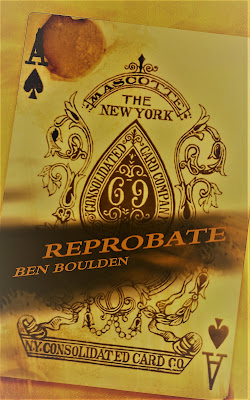 Ma, sainted all these years since, advised me about life as she crossed that sacred veil between this world and the next.

Her voice weakened by sorrow and time, Ma said, “Frankie”—my older brother’s name, but she’d mourned him so long I reckoned she meant no slight, so I kept listening—“your pa’s failings were whiskey and whores—”
The bed’s iron rails clanged as a coughing fit jigged and bounced Ma’s tattered body. I grimaced at the spit and gunk showering the air. My mouth open in a scowl, a rancid green gob of phlegm splattered on my tongue. The diseased glop was foul enough to tighten my stomach in disgust.
Hell, I retched.
But still that sour taste fouled my mouth. I hawked it back at the old lady’s face, hitting her pillow instead.
Even worse, “Dirty whore,” crossed my tongue.
A phrase I regretted as Ma’s eyes rolled into her head and her breathing stopped altogether. During the silence that followed, I hoped them angry words weren’t the last she’d heard. I squeezed Ma’s gnarled hickory hand goodbye, and damn near soiled my trousers when she sat upright. The bedsprings screeching the same sad tune as a jail door slamming shut.
Ma was still for a time. Her eyes closed, mouth open, throat rattling. Her back straight as a lodgepole pine, making me think whatever she wanted was important.
I said, “Ma?”
Her eyes never budged, but her lips twitched, her grip on my hand strengthened. “His worst failing was that damn poker—”
I thought all that, while sitting at the saloon’s finest table playing five card for the past ten hours. My ass cheeks numb as a whore’s—well, that metaphor don’t seem altogether appropriate and so I’ll leave it dangling. Anyway, all them whores and everybody else had gone home except the barkeep and the city man across the table, dressed in black from top to bottom. His winnings piled higher than mine. A damn smarmy smile insulting me as I looked from my hand, no two cards alike, to my last double eagle and back again.
Four hundred dollars in the pot and half of it was mine.
I held my face so it gave nothing away, but that damn city shark know’d my every thought.
The dung-hole leaned forward, elbows on the table. His moon face uglier than imaginable as he opened that deceitful mouth. “Well?”
With my left hand, I teased that gold between my fingers. If I walked away there’d be enough for breakfast, a bath and a whore. But I’d leave my pride in this damn saloon.
The decision made, I tossed the coin onto the pile. “I’ll see your ten and raise you another.”
That objectionable smile defiled the room again, as he topped my gold with paper. “Call.”
That sumbitch winked as he dropped a full house, kings over queens.
With deliberation, I flattened my cards face-down and did the expected. At least it’s what the barkeep expected, since he’d seen it all before. But the shark was a stranger in town.
I said, “You dirty cheat!”
The shark’s eyes bulged as he pushed away from the table and reached for that sissy nickel-plated .38 beneath his arm.
My first shot knocked him backwards, the chair splintering beneath his weight, and my second took him to the floor. Blood pooling without discretion, his eyes seeing nothing at all.
After chastising me, the barkeep brought me a bottle, and as I slowly poured cheap whiskey into a filthy glass, I thought about my mother’s last words.
“You do anything you got to, Frankie”—damn woman never did know my name—“but you lose your money at poker and you’re no better than your reprobate pa.”
I ain’t no reprobate. Just that once, I left a table with less than I brought. And I learned from it.
But I’ll tell you, finding a game’s getting harder and harder.
_____