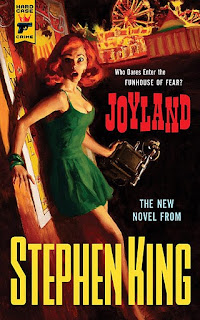 Hard Case Crime recently released a new Stephen King novel—straight to trade paperback—titled Joyland.  It is a short novel, probably not much more than 50,000 words, but it is Mr King’s best work in several years.  Joyland is a difficult novel to categorize.  It is part supernatural ghost story and mystery, but it doesn’t easily fit into either, or even both categories.  It is something approaching a working class soliloquy.  It is narrated as though the protagonist is speaking to himself attempting to find the truth hidden in the story’s events.


Devin Jones is an early-twenties college student with an unfaithful girlfriend, a mourning father, and a dead mother.  In the summer of 1973 Devin takes a job at an amusement park in the small resort town of Heaven’s Bay, North Carolina, called Joyland.  The summer changes Devin; he meets two life-long friends, a murderer, a dying boy, and in the process discovers adulthood.
The story is centered on two primary events.  The first is a murder in the funhouse of Joyland, which occurred a few years before the story begins, and the second is Devin’s introduction to a dying boy named Mike.  The two story lines run parallel, but neatly and satisfactorily collide in the final climax.


Joyland is a carnival novel—every horror writer should have one—but it is much more.  It is a coming of age story where the protagonist is dragged into adulthood by circumstance; a truer understanding is achieved, and the naiveté and brilliance of youth is forever lost.  It is a sad and wistful tale, but it doesn’t dwell on sorrow; rather it is more about hope than anything.  The opening lines frame the mood and pacing of the novel perfectly:
“I had a car, but on most days in that fall of 1973 I walked to Joyland from Mrs. Shoplaw’s Beachside Accommodations in the town of Heaven’s Bay.  It seemed the right thing to do.  The only thing, actually.”


Joyland is a small masterpiece.  It is smoothly readable, and while it tells a story of meaning it does so with a strong and interesting story.  It is anything but HCC’s usual fare, but it is an appealing novel, which should be well liked by Mr King’s usual suspects, HCC’s readers, and a bunch more.  You should try this one.

Richard Laymon was unique voice in the horror genre. His work was always entertaining, but never for the faint of heart. It contained large doses of violence and sex often wrapped in a hard to define adolescent naiveté. He won the Bram Stoker for his excellent novel The Traveling Vampire Show, and his work brought me back to the horror genre fifteen years ago. My favorite of his novels are In the Dark, Night in the Lonesome October, Island, and One Rainy Night.

“Laymon always takes it to the max. No one writes like him and you’re going to have a good time with anything he writes.” —Dean Koontz

“Laymon is Stephen King without a conscience.” – Dan J. Marlowe

Amazon is running a Halloween sale on several of Mr. Laymon’s ebooks through the month of October: $1.99 each. Below below are three of my favorite titles included in the sale. If you click the title of each novel you will be whisked to its Amazon page.

Publisher’s description: At 2:32 in the morning, a Jaguar roars along a lonely road high in the California mountains. Behind the wheel sits a beautiful woman wearing only a skimpy, revealing nightgown. She's left her husband behind. She's after a different kind of man—someone as wild, daring, and passionate as herself. The man she wants is waiting for her...with wild plans of his own.

First paragraph: When he heard the car, the man stood up. He brushed pine needles off the seat of his jeans, then hurried out of the forest and trotted down to the roadside. As he neared the moonlit pavement, headlights swept around a corner to the south. They were very low and very close together.

Publisher’s description: Neal has been carrying a gun in his car lately—just to be safe. And it looks like it's a good thing he has. When he spots a woman tied naked to a tree and a man ready to kill her, he has no choice but to shoot the attacker. As a reward, the woman gives Neal something unimaginable.

Neal's reward is a bracelet. A very special bracelet. It enables its wearer to step inside other people, to see through their eyes, to feel whatever they feel. To take "body rides." But Neal has a big problem. The man he shot isn't dead. And he wants revenge. First he's going to finish what he started with the woman. Then he's going after Neal...

First paragraph: Neal Darden, alone in his car, took back roads to stay away from Robertson Boulevard. He wasn’t worried about too much traffic on Robertson; he was worried about getting shot for no good reason.

Publisher’s description: Vicki was the only one to stand up for Melvin, but even she had to admit he'd gone too far when he dug up a body and then tried to bring it back to life with the aid of a car battery. Years later, and now released from a mental institution, Melvin is back and after Vicki - or rather her body.

First paragraph: That had to be Steve Kraft. It was Kraft’s blue Trans Am, the one his dad gave him when he threw six touchdown passes against the Bay last fall. So that had to be
Posted by Ben Boulden at 7:00 AM No comments:

COME OUT TONIGHT by Richard Laymon 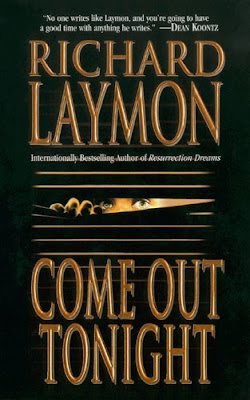 Richard Laymon is a legend in the horror genre. His work is brutal, violent and, at times, almost pornographic. His novel Come Out Tonight is no exception. It is the story of Sherry Gates and her scrape with a demented underage serial killer.

The novel opens with Sherry sending her boyfriend, Duane, to a local convenience store for condoms. When he doesn’t return she gets nervous and goes out looking for him. She finds Duane’s van, but she doesn’t find him. This sparks an all-night search, a chance meeting with a helpful older man and an encounter with two charmingly innocent teenage boys. And, somewhere in between, she is kidnapped, beaten, and raped. The plot takes a number of surprising turns. And in the end, it becomes difficult to tell the good guys from the bad.

Come Out Tonight opens with a bang. The prose is quick and sharp. The story is interesting and the characters are fun, even if a little familiar to anyone who has read Richard Laymon’s work. It is dialogue rich, and a very quick read. Unfortunately, like many of Laymon’s novels, it lacks a certain amount of believability. It is difficult to ignore the glaring fact that all of this pain, fear and horror could be escaped by simply picking up the telephone and dialing three numbers: 9-1-1.

While the characters motives are suspect, and not adequately explained, this is still a fun novel. The reader just has to ignore the obvious holes in the plot, and the fact that Laymon’s characters never make the right decision. They always run down the wrong corridor, or choose the wrong road, or alley. They are innocent, or ignorant, of their true situations, and they always think they can handle it. They never, when it is available, ask for help. And, of course, their actions always lead them into deeper, darker and more frightening places.

Fortunately, it isn’t very difficult to ignore the novel’s weaknesses. Richard Laymon can weave a damn good story and make you want to ignore the blemishes. He does it with a sturdy understanding of the tale and its impact on the audience. He tightens the suspense like a noose around the reader’s neck. He makes you want to believe the tale. It is very much like a campfire story. You know it is not real, and could never be real, but somehow it still enthralls and even scares you.

The action is violent and stuffed with sex—most of the novel is filled with sexual torture, but somehow, as written by Laymon it is less disturbing and nasty than it could be; perhaps because it is seemingly written through the eyes of a thirteen year-old boy. It is more fantasy than reality. And that fantasy is somehow innocent and almost coy.


Come Out Tonight is not for everyone. If you are offended by violence, sex, or just about anything else, avoid this book. If, on the other hand, you like a little heady action and quick-shot violence you just might like this offering. Be careful and don’t take it too seriously, or we all may have to question both our sensibilities and our sanity.

Purchase a copy of Come Out Tonight at Amazon.

This review originally went live April 5, 2007, and since it is October I dusted it off and made it new again.
Posted by Ben Boulden at 4:15 PM No comments: 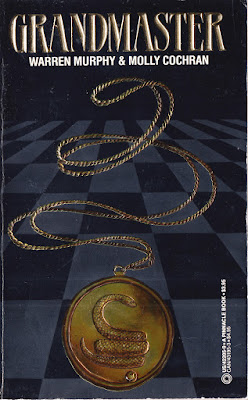 Grandmaster was published in 1984. It won an Edgar Award for best paperback original in 1985, and it is the first, by my count, of seven novels co-written and published as by Warren Murphy and Molly Cochran. It is both familiar and fresh to readers of Mr. Murphy’s long running series, The Destroyer. The familiarity is its Eastern mysticism, and the fresh is its less satirical and more hard-bitten tone.
Justin Gilead is nearly an orphan. His mother died before he was three, and his father—

“a novelist known worldwide by the single name Leviathan, which graced a stream of flashy if embarrassingly illiterate best-sellers”

—promptly unloaded the child to a succession of aunts, uncles, and anyone else who would look after him. An uncle encouraged Justin to play chess, which he did, and very well, but he is more than just a chess prodigy. He is mystical; the reincarnated Patanjali of Rashimpur; The Wearer of the Blue Hat. The fantasy element is remarkably complicated, in a good way, and important to the novel. It is played out in a straight forward cold war espionage with a slash of good an evil.

Grandmaster, when it was released, was a wholly original novel, and still is. It is a mixture of the heroic and cold war machinations. It is larger than life, but reasonable with its grandiosity; Justin Gilead is greater than a simple man, but less than an outright hero. He has failed his destiny and is motivated by revenge. The espionage element is the playground for the story, and while a cold war novel, its focus, and what makes it work, is the thematic good versus evil. The good isn’t the United States, and the evil isn’t the Soviet Union. It is much more personal, and much more interesting for it.

Wonderfully (because it made me laugh), Justin Gilead’s father—at least in name—resembles the bestselling author Trevanian. A man Warren Murphy likely knew since he wrote the screenplay for Clint Eastwood’s adaptation of Trevanian’s novel The Eiger Sanction. And Mr. Murphy’s assessment is less than fawning—see the quote above.


Purchase a copy of Grandmaster at Amazon.
Posted by Ben Boulden at 3:30 PM No comments: