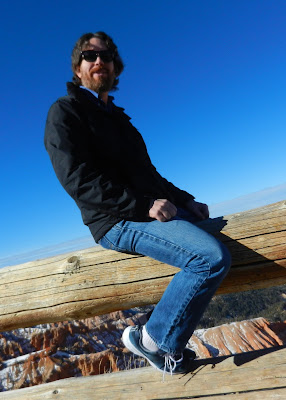 There isn’t much about me that is interesting to anyone other than me. I’m not an adventurer, philosopher, world traveler, or anything else that perks peoples’ interest. I’m slipping across the threshold of middle age; married, a beautiful daughter, a cat, a dog. I’m a trained accountant working as an auditor—documented support is required for everything—and live in a suburb of Salt Lake City in the shadow of the Wasatch Mountains. Those are the facts; broad and bare.

I’ve been reading and writing since I was old enough to turn the page and hold a pencil. My reading has been more successful than my writing, but I’m making progress. My debut novel, Blaze! Red Rock Rampage, the fifteenth title in the Blaze! Adult Western series and its sequel, sort of, Blaze! Spanish Gold, were released in 2017 from Rough Edges Press. 2017 also saw a couple of my short stories hit print, “Merrick”, a hybrid crime-western heist story as an Amazon Kindle exclusive and a bleak noir tale, “A Calculated Risk” is in Down & Out: The Magazine, Vol 1, Iss. 2. As for 2018, we’ll see what happens.

My non-fiction writing tends towards books and criticism. I write the “Short & Sweet: Short Stories Considered” column for Mystery Scene Magazine, and also regularly review mystery, crime, and thrillers for its august pages. My essays, “Reading Ed Gorman” and “Easy to Read: A Story of Rick Ollerman” were published in the Stark House Press editions of The Autumn Dead / The Night Remembers by Ed Gorman and Truth Always Kills by Rick Ollerman, respectively.

As for my reading, it started in the usual places — The Hardy Boys, Nancy Drew — and then turned to adventure fiction — Alistair MacLean, Jack Higgins, David Morrell — before taking a brief foray into the techno-craze of my middle-teens — Tom Clancy, Larry Bond, Charles D. Taylor. I discovered the bliss of crime fiction in my early twenties, and have never looked back. It has been the center of my reading for nearly twenty years, and it will likely remain so for many years to come.