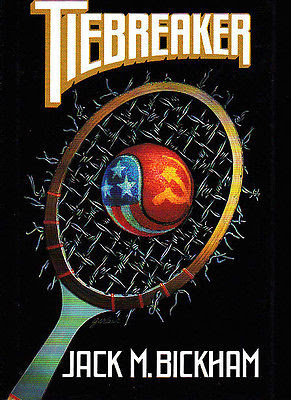 In 1989 a midlist writer named Jack Bickham published the slim suspense novel Tiebreaker. It was the first of six novels featuring aging professional tennis player, current teaching pro, sometime magazine writer, and former CIA asset Brad Smith. Brad is a step beyond the tail of his career and, after investing his prime years’ winnings unwisely, earns a living as a teaching pro at a club in Richardson, Texas. The novel’s opening is too good not to share—


“The last thing I had on my mind was somebody breaking into my condominium and dragging me into the past.”


It wasn’t on his mind because he was playing the finals of his tennis club’s first annual Richardson Charity Tournament against a hotshot college player acting like John McEnroe and threatening to clean the court with Brad. A battle between age and arrogance. When Brad makes it home, so both he and the reader can discover who and what is going to drag him into the past, he finds his old agency contact, Collie Davis, watching a western on television with a beer in his hand.

The agency has an assignment requiring Brad’s specialized credentials; a young Yugoslavian tennis star named Danisa Lechova wants to defect to the west, but her passport has been confiscated, and the UDBA (Yugoslavia’s version of the KGB) is openly watching her. Brad agrees, reluctantly, to act as Danisa’s go-between for the defection, using his cover as a tennis writer.


The Brad Smith novels rank as my favorite featuring a serial character. Brad is uniquely American. He does odd jobs for the agency due to a perceived debt he owes—

—but he often doesn’t like the assignments, or the agency’s work overall. In a sense he is supporting the lesser of two evils—meaning the CIA against the KGB and the Soviet Union. He is a patriot, but it stops somewhere short of murder, coups, criminality, and E. Howard Hunt. He has a conscience and a well-defined ethical awareness that is unique to spy thrillers. He is also likable, admirable, mostly, and has more trouble with women than imaginable.


The novels, and Tiebreaker is no exception, are written in both first and third person. Brad’s perspective is in first, and an assortment of characters, including good guys and bad, are in third. The alternating perspectives give the novel a hybrid feel—Brad’s narration is more closely related to a private eye novel with social commentary making it more personal, and the third person expands it into a broader and larger suspense-spy story.

The tennis is an integral element to the story, and it is described so well it becomes a secondary character—


“Somehow I got my Prince composite on the yellow blur and bounced it down the line, hitting the back corner, close. He glided over to get it and I thought I saw the angle and guessed, chuffing up toward the net.”

The suspense is expertly designed around the story questions—a clue is identified, but its impact and relevance is not revealed for several pages. It is done without any annoying tricks or contrivance. The characters—both Brad Smith and the secondary folks—are well defined without any doubts about motivation or outcome. There are no crazy monsters, or unexplained actions. Everything is logical and smooth.

I like Tiebreaker and its five sequels so well that I re-read the entire series every few years, and if I was any more weak-willed I would probably read them more often.
Posted by Ben Boulden at 11:40 AM No comments: