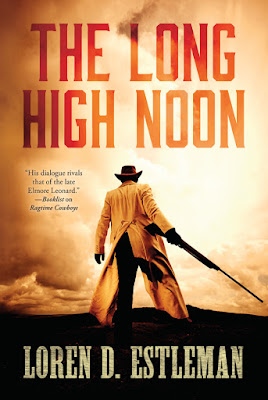 “No one but Randy Locke and Frank Farmer knew just what it was that blackened the blood between them, but it didn’t lose its kick with time.”

The feud began in 1868, for reasons unknown, when the two traded drunken shots in an El Paso saloon. It escalated the following morning when Randy broke one of Frank’s ribs with a .44 slug, and their lifelong co-dependence was cast with Randy’s crushed leg; an injury caused by Frank’s misjudged pistol shot, which placed the pill in the horse rather than Randy. From there the two men dance across the Western frontier, their sole reason for living the taking of the other’s life—they trade barbs in Salt Lake City, hunt each other in Wyoming and San Francisco, and plan, with the aid of huckster Abraham Cripplehorn, a live pay-per-view duel to the death in Indian country.

In an early passage the narrator—an unidentified gentleman who, from time to time, slips into first person—tells of Randy’s success with women (sometimes not having to pay at all), and Frank’s reaction: “That little stump’d have to pay a sheep.”

In a later passage Abraham Cripplehorn tells Randy: “It never occurred to me you had a mother.”

It chronicles, tongue-in-cheek, the settlement of the American West; from the post-Civil War expansion to its ultimate settlement and civilization. It is something of a mythology of the mythology of the West. It starts with the dime novels, the sensationalism of early western journalism, the traveling Wild West shows, and ultimately the rise of settlement and the fall of men such as Frank Farmer and Randy Locke. A fall both men take quite fittingly.

The Long High Noon is smooth, vivacious, and curious. There are moments—splashes of dialogue, shimmering narrative, clever twists—when Mr. Estleman appears to be showing off; it isn’t cheap or distracting, but rather a display of how good a writer he is. He has mastered his art, and it shows. It also displays a deep understanding of both the westward expansion and the literary genre that grew up around it; the reality and mythology wrapped into one neat package.

I wrote this review for Ed Gorman’s fine blog New Improved Gorman. If you haven’t been there, you should.

Purchase a copy on Amazon.
Posted by Ben Boulden at 3:15 PM No comments: 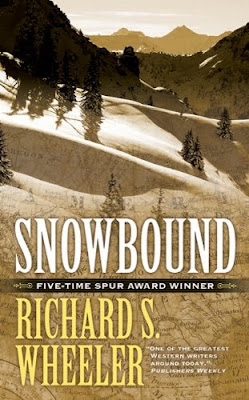 Richard S. Wheeler won a Spur Award for Best Western Short Novel for his 2010 novel Snowbound, and it was a well-earned, and deserving honor. Snowbound is less Western and more historical. It chronicles John C. Fremont’s ill-fated fourth expedition, which was ostensibly to find a railroad route across the Rocky Mountains at the 38th Parallel between St. Louis and San Francisco.

The expedition was privately funded by a group of St. Louis businessmen—with the support of Fremont’s senator father-in-law Thomas Benton—and while its claimed purpose was to find a railroad route its true purpose was to rehabilitate Fremont’s public reputation after his court-martial, and ultimate resignation from the United States Army. The route crossed the high and rugged spine of Colorado’s Rocky Mountains, where a railroad passage was unlikely at best, and, to prove something to his detractors, it was attempted in winter.

Snowbound is effectively told in an alternating first person narrative. The narrative perspective changes from chapter to chapter. It is told in the words of several characters, including Fremont, and several of the expedition members—Dr. Benjamin Kern, Alexis Godey, its lead scout Old Bill Williams, and others. It reads much like a diary—the dialogue is minimal, and the story is primarily told with the internal observations of the narrating characters. It is, through the horror of the failed expedition, a character study of John Charles Fremont. Fremont is presented as an enigma. He is narcissistic, admired—idolized, really—complicated, and, in the end, loathed by some.

The novel’s true power is its powerful description of the oppressive, brutal cold of the snowbound high Rockies, and the hardship of the expedition—

“We all looked pretty grim at times, with icicles dangling from our beards like chimes and ice collecting in our eyebrows and a rime of frost around our nostrils.”

“This was a tumble and rocky land, with giant gray outcrops, steep slopes, somber pine forests, groves of spidery cottonwoods and aspen, fierce, cruel creeks. And snow lazily smothered the country. It had caught and settled in every valley and dip, so that we were crossing spots that were ten or twenty feet deep, perilously working upslope in a tamped-down trench that reached our heads.”

“Somehow, we made camp and got fires going in protected snow pits where the wind would not snuff them. The snow had diminished, but the heavens scowled at us, and I had the sense we were trespassers, invaders of a place that was sacred to others, where no mortal should pass by.”

The hero of the story is Alexis Godey, a former fur trapper and scout, who is Fremont’s second in command. He is developed as a quiet, competent, and ethical man. Godey was responsible for saving the bulk of the expedition’s men when he led the relief party—after reaching Taos with Fremont, and a few others—back into the Mountains to rescue those stranded by hunger and cold. While Godey is leading the relief party, Fremont recuperates in Taos planning the next leg of the expedition to California, and preemptively blaming the scout Old Bill Williams for the disastrous expedition.

Snowbound is a powerful novel of survival, and calamity. It is an introspective interpretation of one of the most eccentric and dishonest topographical expeditions of the Western United States. It is a beautifully rendered piece of literature that captures the stark beauty of winter on the high ranges, and both the hubris and nobility of men.
Posted by Ben Boulden at 2:24 PM 3 comments:

Montana Bad Man was a paperback original published by Pocket Books’ imprint Perma Books in 1957, which is the very edition that caught my eye. The artwork is starkly creepy as it washes from the muted color of a face to an ink drawing of a crumpling gun hand. A splash of red bandanna crosses both elements, and adds an intriguing abstraction of violence. The artist: Jerry Allison. 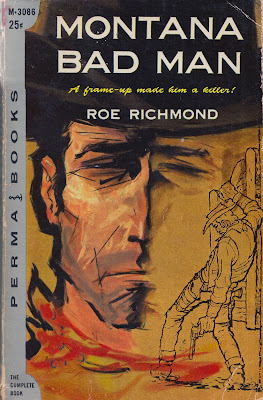 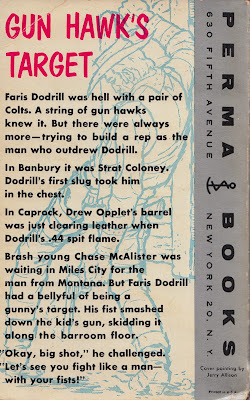 “The big Schuttler freight wagon rocked along the ungraded road in the thickening gloom, creaking and rumbling ponderously behind the six-mule team.”

Roe Richmond was a pseudonym for Roaldus Frederick Richmond (1910 – 1986). He spent his life in New England; Vermont and New Hampshire, specifically. He started as a pulp writer—writing sports stories—and moved to paperbacks in the 1950s. His novels were primarily westerns. Contemporary Authors, in its brief biography of Mr Richmond, quotes the following—

“I have loved writing from boyhood. I cared for no other career once I learned I couldn’t make the Biggies in baseball, but most of my life I’ve had to work at other jobs in order to support myself and family.”

This is the fifteenth in a series of posts featuring the cover art and miscellany of books I find at thrift stores and used bookshops. It is reserved for books I purchase as much for the cover art as the story or author.
Posted by Ben Boulden at 9:36 AM 2 comments: 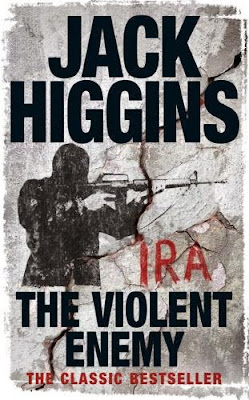 The Violent Enemy is the film title for Harry Patterson’s 1966 novel A Candle for the Dead. A title that lasted well past the film’s fade to black, and still adorns its covers. It is Mr Patterson’s nineteenth novel. It was published in hardcover by Abelard-Schuman as by Hugh Marlowe, and it is one of only a few of Harry Patterson’s novels to remain out of print in the United States until the recent ebook frenzy.

Sean Rogan is an Irishman serving 12 years in a British prison. He is “Irish” to his is prison mates, and on the outside he is an Organization man, which is to say IRA, convicted of arranging prison breaks for his compatriots. The troubles are largely over, the Organization faded away, and Rogan is awaiting a pardon from the Home Secretary. The pardon never arrives, and Rogan’s old boss, Colum O’More, arranges the logistics for his final break out.

O’More has a plan to get the Organization moving again, but he is ill and desperately needs Sean Rogan’s help to pull it off. The plan is to steal a load of paper currency marked for destruction in a rural town in England’s Lake District. The job is simple, but the talent O’More brought in are the kind for treachery, which, along with betrayal, is the novel’s main tenant.

The Violent Enemy is something of a transitional novel in Harry Patterson’s work. It is similar in story and style to his early novel Cry of the Hunter—the lead characters are similar and the plots are mirror images—but Enemy’s characters, particularly Sean Rogan, are developed more expertly. There is much in Rogan that would appear in Mr Patterson’s later character Liam Devlin, and the female lead, Hannah Costello, is a composite for Mr Patterson’s abused, but lovely, strong, and virtuous woman featured in many of his best novels. A character that, more than any other, I associate with Harry Patterson’s work.

It is also transitional in its use of language. The prose is less adorned with elegant, striking and almost beautiful, passages than most of the early novels. It is starker, and standard. It fits the novel, but I wanted for a passage that forced itself to be reread. There were a few very nice moments, mostly dialogue, which is unusual for Mr Patterson—

“‘A fresh start makes old friends of bad ones,’ he said. ‘A proverb my grandmother was fond of.’”
And, in response to a prison guard’s optimistic job satisfaction—

“‘I’d rather be the devil,’ Sean Rogan said with deep conviction.”

The Violent Enemy’s plot is, as always with Harry Patterson, smooth, complete with nothing left dangling, and familiar. Its pace is not perfect—it builds slowly with a few hiccups, but the climax is executed brilliantly. It is far from Mr Patterson’s best work, but it is a very capable and enjoyable thriller.

The Violent Enemy was produced as a film in 1967. It was directed by Don Sharp (Alistair MacLean’s Bear Island, 1979), and starred two pretty good actors as Sean Rogan and Colum O’More—Tom Bell and Ed Begley, respectively.

“‘Well, the wife—I’m not sure you ever met her, gal from Sioux City I met when I was doing my printing apprenticeship up there—anyway, she was raised as an evangelical.  And what with one thing and another she kinda got me interested in the whole thing. She always says you should feel bad when you go to church. And I tried ‘em all—Lutheran, Baptist, Presbyterian. But they always tried to make you feel good. But bad’s the only way you know your religion’s workin’ for you. When you feel terrible.’”


No Comment is a new series of posts featuring passages from both fiction and non-fiction that caught my attention. It may be the idea, the texture, or the presence that grabbed my eye. There is no analysis provided, and it invariably is out of context—since the paragraph before and after are never included.
Posted by Ben Boulden at 5:41 PM No comments: