The Potsdam Bluff was published as a hardcover by Tor in 1991, but the edition that caught my eye is the mass market published in 1992 (also by Tor). The cover is a nice montage that fits its release era perfectly and reminds me a little of Pocket’s Jack Higgins novels with the two main characters pictured across a background of war and destruction. The artist: Don Gonzalez 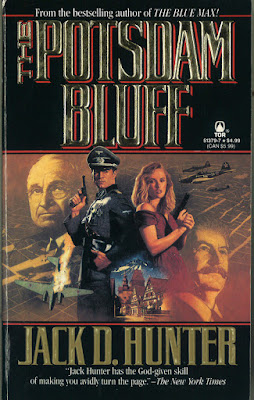 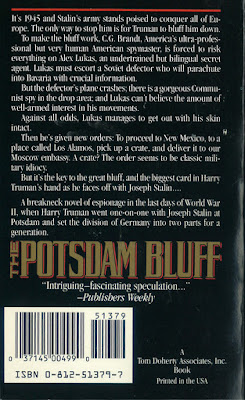 The first sentence:
“The American news correspondents had been authorized to visit one of the fighter squadrons that were supposed to protect Moscow from Nazi bombers, which, as everybody knew, no longer represented any kind of threat to anybody anywhere, especially here in Russia.”
Jack D. Hunter made a career of the news business, working as a reporter and columnist, and wrote fifteen novels centered around World War Two and the spy game. His 1964 novel, The Blue Max, was made into the 1966 film starring George Peppard and James Mason, and directed by John Guillerman. His writing tends to be descriptive and detailed, but at times, can be bogged down by those same qualities.
Posted by Ben Boulden at 10:30 AM No comments:

CHAIN OF EVIDENCE by Garry Disher 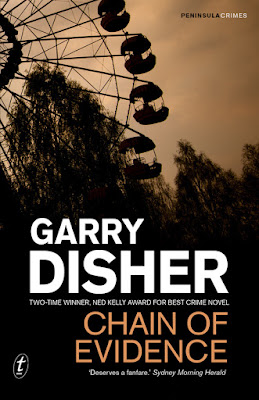 Chain of Evidence is Australian crime writer Garry Disher’s fourth novel to feature Inspector Hal Challis and Sergeant Ellen Destry. A police procedural set in the rural, but booming Mornington Peninsula area south of Melbourne in Victoria, Australia. A place where poverty and wealth live side-by-side and crime is as deadly and ugly as it is in any large city.

While visiting his dying father in his childhood home in the dusty, hardscrabble South Australia town of Mawson’s Bluff, Challis unofficially investigates the mysterious disappearance of his sister’s husband, Gavin Hurst, from eight years earlier. Hurst is a man not readily missed by many of Mawson’s Bluff’s residents and his disappearance is truly a mystery. His truck abandoned at the desert’s edge, his body never found.

Back home at the Waterloo Station, Ellen Destry is filling in for Challis during his absence, a girl is kidnapped on her way home from school. She is found imprisoned in an uninhabited house. Abused by what Destry believes is a pedophile ring operating in the Peninsula. Her investigation hits roadblocks from within the police service and the only person she can trust is Hal Challis, more than 1,000 kilometers away.

Chain of Evidence is a powerful and disturbing procedural. The two major mysteries are intriguing and executed with the sure hand of an absolute professional. It is Ellen Destry’s coming out as an equal partner with Challis. The setting, both the Peninsula and Mawson’s Bluff, is rendered with a muted artistry and adds immeasurably to the novel’s power. There is nothing gory or exploitative about either storyline and Mr. Disher has a way of mixing character stereotypes to develop tension between the characters, the plot, and the reader. It may be the best book in the series. If you are new to Garry Disher, Chain of Evidence is a very good place to get acquainted.

A Trio of Mack Bolan 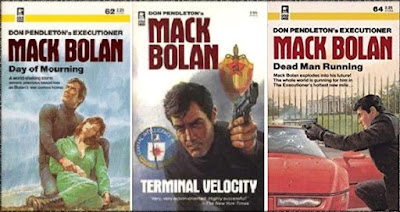 A few months ago I read the trilogy that killed Colonel John Phoenix and brought Mack Bolan back to the world. I had meant to write a detailed review when I read these, but time (a lack of it) conspired against me. The trilogy includes two Executioner novels, 62, Day of Mourning and 64, Dead Man Running, both written by Stephen Mertz and the Super Bolan title, Terminal Velocity written by Alan Bomack. Alan Bomack is a pseudonym and a snazzy anagram (with a little cheating) of Mack Bolan. The books were published between February and April 1984.
Day of Mourning is the best non-Don Pendleton Mack Bolan books I’ve read. It is a straight ahead thriller with a terse, hard-boiled style, matching the originals very well. It chronicles the murder of April Rose and a grave threat to Stony Man Farm.
The story continues with Terminal Velocity, which has the feeling of two separate novels smashed together. Its purpose in the story arc is to introduce Greb Strakhov, and the reason for Strakhov's grudge against Bolan. Its style is less hard-boiled than DOM, but in its own right an entertaining and very readable thriller.
The trilogy finds its conclusion with Dead Man Running, which is a fine finale. It is a slight step down from DOM, but it admirably chronicles Mack’s journey from Colonel Phoenix back to Mack Bolan. All done while hunting the mole who gave up Stony Man to the Soviets and indirectly caused the death of April Rose.
These, especially the two written by Stephen Mertz, are really terrific action thrillers.


This review, in slightly different form, originally appeared on Gravetapping’s Facebook page. If you don’t follow Gravetapping on FB, you should, and here is the link.