THE MASTER SNIPER by Stephen Hunter

You may have noticed, or maybe not, that it has been overly quiet around here the past few weeks. It's been a busy first few weeks of the year, but everything seems to be calming down and we--my wife and I--are getting back into the natural rhythm of life so, with a little luck, I should be back to getting two or three posts up per week shortly. Until then, here is a review I wrote a few years ago for an older Stephen Hunter novel.
I’ve been in a thriller mood recently, but most of what the current crop of thriller writers puts out doesn’t do much for me. Their writing seems flat, uninteresting, and their plots are full of holes and so unbelievable that I usually can’t get through the first fifty pages. It doesn’t help that many of them are 500 pages long or more. That’s why I recently read an older novel written by a thriller writer who has never disappointed me. The novel: The Master Sniper. The writer: Stephen Hunter.

The Master Sniper is an early novel by Stephen Hunter; it was originally published in 1980. It is a thriller of the Second World War—a sub-genre I love—and it reminded me just a little of Jack Higgins’ bestselling The Eagle Has Landed.

Captain Leets is an officer with the Office of Strategic Services, a paper-pusher really, who specializes in Nazi firearms. He, as everyone else, is waiting out the war. It is January 1945, and the Nazis are against the ropes. They still have enough muscle to do some damage, but the end of the war is in sight, and no one wants to take too many chances, and Captain Leets is no different.

That all changes when a strange report crosses his desk: a small shipment of Stermgewehr-44s—an assault rifle that was produced and requisitioned in the thousands—was sent from the factory to a place called Anlage Elf. Leets isn’t sure why, but something bothers him about this shipment of rifles. It’s not just the number of rifles being shipped, but no one has heard of the requesting agency, and why would the Germans risk shipping such a small amount of rifles across the country when the war is lost?

This sets up a mystery that Captain Leets will struggle to solve throughout the rest of the novel. He will go against his superiors, participate in a parachute raid of an enemy camp, discover things about himself that he doesn't like, alienate friends, and slowly, ever so slowly discover what the Germans are up to.

The Master Sniper is a rewarding read. The prose is quick and spry, while the plot is rich enough to keep you guessing until shortly before the end. Mr. Hunter ratchets the tension and suspense perfectly, and the characters are enjoyable and likable—Mr. Hunter does an excellent job of creating a likable hero, while also creating a villain who doesn’t seem terribly bad until the novel begins to unwind, and then he is unmasked as a truly despicable and dangerous person.
Posted by Ben Boulden at 12:37 PM 2 comments: 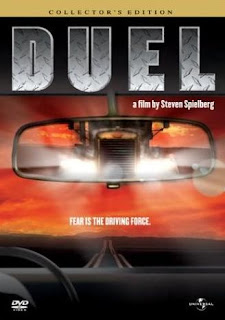 Duel was an ABC movie of the week originally aired in November 1971. It was Steven Spielberg’s first crack at directing a movie, and he really delivered. It was filmed on location in thirteen days and the final product feels more like a feature film than a made-for-television movie. The camera work is impressive. There are several beautiful low-angle moving shots on the highway and an impressive freehand, documentary-style, scene shot in a truck stop.

The story is relatively simple—a salesman traveling a California highway passes a slow moving tanker truck. The driver of the tanker takes exception, and the rest of the story unfolds as the truck chases David Mann (the salesman) along the narrow two-lane highway. The driver of the truck is never revealed, which creates a sense of broad-based terror as the antagonist actually becomes the truck.

Richard Matheson wrote the screenplay, based on his novelette, and it is a taut and linear tale of a normal man trapped in a situation where only he can save himself. It is a little Alfred Hitchcock, and a whole lot Richard Matheson. The film is faithful to the novelette, but there are a few additional scenes and an extension of one—the truck stop scene was lengthened and improved over the story. Dennis Weaver—playing David Mann—creates an anxiety that is realistic; I saw a whole lot of myself in his reactions and behavior.

The original television version was released in a 90-minute time slot. The actual film clocked in at around 73-minutes, but it was lengthened to 90-minutes and released as a feature film in Europe. The current DVD is the 90-minute version, and my understanding is that Spielberg extended a couple scenes and added one. I haven’t seen the original version, but I really can’t imagine that it was any better than the longer theatrical version.

Duel is worth seeking out. The DVD is priced at around $10, and it is worth every penny. It also includes two lengthy interviews with Spielberg, and one with Richard Matheson. The original novelette should also be read. In fact, read it and then watch the film. It is available in two current editions: Duel: Terror Stories and Richard Matheson: Collected Stories, Vol. 3.