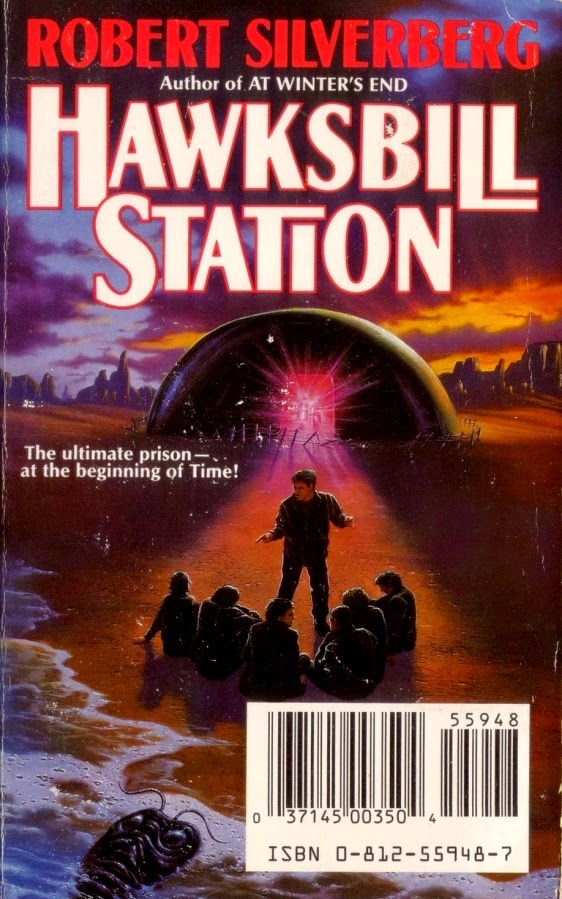 I’m a new arrival to the school of Robert Silverberg. I read The Book of Skulls in 2005 and I’ve made a point to read at least some Silverberg every year since. A few weeks ago I found a TOR Double—No. 26—that featured “Press Enter” by John Varley on one side and Robert Silverberg’s “Hawksbill Station” on the other. The TOR Double contained the text of the original story published in Galaxy in 1967. The story was expanded and published as a novel in 1968. A novel I have not yet read.

Hawksbill Station is a penal colony used to segregate political dissidents from the general population. It is much like the Soviet gulags of the mid-Twentieth Century, except there are no guards, no fences and no returns. A wall of time, two billion years long, separates Hawksbill and the society that created it. It is on an Earth that has yet to witness its fish crawl from the sea. The camp’s only connection with the future, what the men call “Up Front,” is a device called the Hammer and Anvil—a time machine that only operates from the future to the past. And it is the lifeline of the small penal colony. It is where the new inmates, and the meager supplies arrive from.

“Hawksbill Station” is an intriguing story. It alters the Cold War prison tale into dystopian science fiction. While the model of the prison is clearly based on the Soviet-style gulag, the story is as much about capitalism as it is about communism. The idea: oppression is oppression no matter its wrappings. With that said the politics of the story are less important, much less, than the story itself. The setting, as dark and desolate as it is, has a beautiful surreal sense—picture an Earth with no mammals and no flora inhabited by trilobites, a wild ocean, and several dozen men.

The story is only 86 pages in mass market, but Mr Silverberg, with a sparse and seemingly simple prose, is able to create both the world and the characters in a detail that many writers are unable to do in three- or four-hundred pages. He makes the characters, all of them, sympathetic and likable. The antagonist is two billion years from where the story is told and is really nothing more than the shadow of a bogeyman.

“Hawksbill Station” is the real deal. It is a science fiction story that tells something of who we are as a culture, and more importantly, what we are as individuals.  It is a truly excellent story.

This review originally went live June 20, 2012 in, mostly, the same form. I still haven’t read the expanded novel version, but it is very much on my reading list.
Posted by Ben Boulden at 12:03 PM No comments:

Killer’s Choice was (I believe) a paperback original published by Berkley Medallion in 1965. The copyright date is listed as 1964, and it is possible there was an earlier edition. The edition that caught my eye is the 1972 mass market reprint—also published by Berkley Medallion. It features a wounded man—his back to the audience—drawing his revolver. The art is vivid in a muted and almost melancholy manner. The background is empty except for a lightening—as it climbs the cover—blush of sandy brown. It has the appearance of a dust storm, and effectively isolates the man from his surroundings. The artist: It is signed “Watson,” but an Internet search came up empty on additional details.

“There was no moon. A warm wind moved steadily over the vast, tinder-dry prairie. The noise of the wind and lack of moonlight made it a perfect night for the killer’s work. The killer was anxious to get the job done since he had already been paid for it.”


This is the twelfth in a series of posts featuring the cover art ad miscellany of books I find at thrift stores and used bookshops. It is reserved for books I purchase as much for the cover art as the story or author.
Posted by Ben Boulden at 3:58 PM No comments:

I’m a collector of words and the ideas those words convey. When I come across a passage I think is significant or a passage I like—for no other reason than the way it sounds, its texture, its presence—I write it down. I save it. Then I go back and re-read it. Not often. It may be months or years from that initial contact to our next meeting. It is always out of context because the passage is no longer encapsulated in its original narrative, and I find something more—or sometimes less—than I did on that first introduction. There is such a passage I recently re-read in Brian Garfield’s fine novel Death Wish.

The protagonist Paul Benjamin—an antihero that is less hero, anti or otherwise, than terrified everyman—is fresh from his first successful encounter with a teenage mugger more frightened than he. He sits in his New York City apartment watching a horse opera on television, and for the first time he understands the Western story. Its mythology and power. The story of the strong exploiting the weak. The appearance of an outsider who, against his own self-interest and without any hope of ever belonging to the beleaguered class he defends, appears to make things right. A black and white justice. Good versus evil—

“Cowboys picking on sodbusters and a drifting hero standing up for the farmers against the gunslingers. He watched it for an hour. It was easy to see why Westerns were always popular and he was amazed he hadn’t understood it before. It was human history. As far back as you wanted to go, there were always men who tilled the soil and there were always men on horseback who wanted to exploit them and take everything away from them, and the hero of every myth was the hero who defended the farmers against the raiders on horseback, and the constant contradiction was that the hero himself was always a man on horseback. The bad guys might be Romans or Huns or Mongols or cattlemen, it was always the same, and the good guy was always a reformed Roman or Hun or Mongal or cattleman; either that or a farmer who learned to fight like a Hun. Organize the farmer into imitation Huns and beat the real Huns at their own game.”

The Western as history. Not just American history, but all human history is a big idea. It is also an idea that—in bottom line general terms—is accurate. There have always been, and always will be, those that take everything if left unchecked. The corporate robber barons. The Nazis. The Soviet Communists. The local neighborhood or schoolyard bully. All of us are looking for a hero, or at least an heroic act, to believe in, and the Western is a uniquely American vehicle of delivering that mythology. And one I admire very much.
Posted by Ben Boulden at 8:42 PM 3 comments: 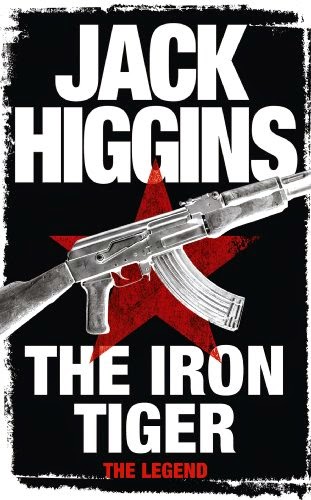 The Iron Tiger is the seventeenth novel published by Harry Patterson. It was originally released in the U. K. as a hardcover by John Long in 1966, and it made a pre-The Eagle Has Landed appearance in the United States in October 1974 as a paperback original from Fawcett Gold Medal—the jacket copy reads: “by the author of The Savage Day.” I mention this because I love finding the early U. S. paperback originals.

Jack Drummond is a cynical and somewhat worn out bush pilot making a living flying guns into Tibet. He, like many of Mr Patterson’s characters, is a soft-hearted rogue and something more than he seems. He was drummed out of the Royal Navy Air Fleet during the Korean War for an incident deemed negligent friendly fire, and now works as a mercenary for (so he says) anyone paying the tab.

When he is approached by a beautiful American nurse—returning to the U. S. from two years in Vietnam—to fly a boy who needs eye surgery out of the India-China border country of Balpur he accepts quickly. Unfortunately it doesn’t turn out well for Jack. His plane is a smoldering wreck on the runway of the tiny Balpur airport. A storm—first rain and then snow—raging across the high border country as he escorts, by truck, foot, and horse, an ill boy, a nurse, and an aging priest across the mountainous landscape of Balpur to the Indian border. The Red Chinese army rushing his wake.

The Iron Tiger is both familiar and new, and successful and flawed. It is familiar in that it has the rugged sparse language and plot of Mr Patterson’s best work. It is something of a hybrid between The Year of the Tiger (1964) and The Last Place God Made (1971); although not nearly as good as the later. It also has an echo of Alistair MacLean—the setting, particularly the harsh landscape and weather, and treachery from an unexpected source. The new is the description, especially in the early pages, of India. A particularly nice scene is that of a family giving the ashes of a young child to the Ganges River—

“They stood on the edge of a small crowd and watched the ceremony that was taking place. Several people stood knee-deep in the water, the men amongst them stripped to the waist and daubed in mud. One of them poured ashes from a muslin bag into a larger paper boat. Another put a match to it and pushed the frail craft away from the bank, out into the channel where the current caught it.”

The adventure is pure bliss, but the plot could have been developed more and—this isn’t something I say often—the novel a little longer. The climax was cut short of what it could have been by the brevity of the story. The cavalry was required to save the day (rather than the Drummond and company pulling at off on their own). This isn’t one of my favorite novels by Harry Patterson, but it is entertaining, and fun.

DARKER THAN NIGHT by John Lutz 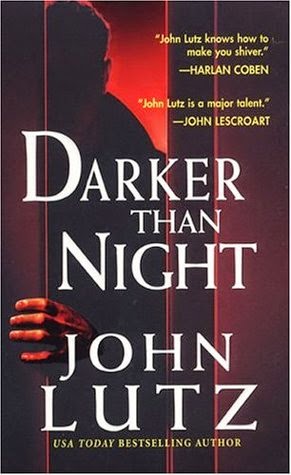 John Lutz is an old school, in a very good way, crime writer whose first novel—The Truth of the Matter—was published in 1971. Since then he has written a few dozen more including three private eye series: the bedraggled and softhearted Alo Nudger, the physically damaged and tough as nails Fred Carver, and the more police procedural-like Frank Quinn. The Nudger and Carver novels have run their cycles, but the Frank Quinn series continues to march strong.

Quinn was introduced in the 2004 novel Darker Than Night published as a paperback original by Pinnacle Books. A novel that is more than ten years old, but a novel I left unread until recently. “The Night Prowler” is something of a fetish killer. He relives a powerful incident fifteen years earlier. He stalks his prey—seemingly happily married couples—focusing his attention on the wife. He leaves anonymous gifts: expensive jackets, candy, gourmet jam, roses. He does all this as a twisted foreplay to his end game, which is the violent death of both partners.

Frank Quinn is a disgraced former NYPD detective who was chased from the force with nothing except his pension. He molders in a decrepit Manhattan apartment. His ex-wife and daughter are gone. His reputation is broke, and his only comfort is from the bottle. Everything changes when he is approached by the upwardly mobile and very ambitious Harley Renz. Renz has an offer—find The Night Prowler and get his job back, and maybe his reputation, too.

Mr Lutz plays the serial killer plot perfectly—developing both the protagonist and antagonist with relish while holding back the killer’s identity until late in the game. The plot is an example of oversized perfection. It is tricky, smooth, and, even better, believable. Believable because of the strong character development, and the hardnosed blue collar police procedural aspect to the investigation. The detective work seems real and workable, which grounds the expansiveness of both the crimes and the perpetrator.