The latest issue of Mystery Scene Magazine—No. 149—is at a newsstand near you. As usual, it is packed. It features Ron Miller’s terrific article “Why Can’t the Movie Be Just Like the Book?” “The Small World of Modern Thrillers” by Nicholas Barber and the second part of Lawrence Block’s “How to be a Writer Without Writing Anything,” which I’m still using as a blueprint for my future projects.


It also features my short story review column, “Short & Sweet: Short Stories Considered.” All of the column reviews are currently available in the print edition and most are also available at MS’s website. In the column I discuss:
Bound by Mystery, edited by Diane D. DiBiase, is an anthology celebrating Poisoned Pen Press’ 20th anniversary.
Anatomy of Innocence is an anthology, but also something very different from my usual coverage since it features true stories about men and women of have been wrongly convicted, and since released, of crimes they didn’t commit.
The January/February issue of Alfred Hitchcock Mystery Magazine, featuring stories by Hugh Pentecost, S. J. Rozan, Brendan DuBois and nine others. Unfortunately this is a print exclusive.
The Purple Flame and Other Detective Stories, collecting 15 traditional mysteries by Frederick Irving Anderson.
There are also three of my book reviews in Issue No. 149. The titles: Heretics by Leonardo Padura, The Day of the Lie by William Brodrick, and Undertow by R. M. Greenaway. The book reviews are all available at MS’s website:
Heretics by the Cuban author Leonardo Padura is an interesting and well-developed, if a little long, private detective novel set in Cuba.
The Day of the Lie by William Brodrick is the fourth novel featuring Father Anselm that is more thought provoking than thrilling.
Undertow by R. M. Greenaway is a fine Canadian police procedural set in Vancouver, British Columbia.
The reviews are available online at Mystery Scene’s website—click the titles above.
Mystery Scene is available at many newsstands, including Barnes & Noble, and available for order at MS’s website.
Posted by Ben Boulden at 8:00 AM No comments:

COPP ON ICE by Don Pendleton 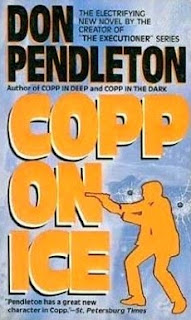 The fifth in the Joe Copp series, Copp on Ice, is pure hardboiled fun. Joe Copp, the toughest most righteous P.I. in Southern California, is hired on a short term basis as the chief of police for the growing inland city of Brighton. The city manager has promised him 48 hours, but Joe will be lucky if he makes it 36. His mission: find Brighton PD's corrupt cops and kick every last one to the curb, dead or alive. And corruption is exactly what Joe finds. Enough to make him good and angry.


Heavy on the hardboiled—prose and attitude alike—Copp on Ice reads like a shot of rock candy. The mystery quick and satisfying. The social commentary rough-edged, but illuminating and surprisingly relevant more than 25 years after its original release. The fun includes a climactic gunfight shot in the nude, more than a handful of murders, mostly cops, a house of sin and graft, sexual perversion and more. And Joe Copp, the man on a mission, the man with a code, the man who gets the job done, the man who is anything but an enigma, is always entertaining in his rough, over-the-top tough guy way.
Posted by Ben Boulden at 8:35 PM No comments: