My magic as a writer—if I have any—happens in the second and third and fourth drafts. The first draft is a mad and passionate sprint. The characters and the story collide with unexpected results. What I thought would happen (before I wrote that first line) rarely does. The theme doesn’t change, but the way it plays out often will. As an example of how my cluttered writerly mind works, I dug up three different openings for my recent short story, “No Chips, No Bonus” published in the anthology Paul Bishop Presents… Pattern of Behavior, for comparison.

The first beginning is what I saw when the story played itself for me in a day dream. A hot and sweaty desert afternoon. The hero, in this case a guy named Jimmy Ford, being pulled into an isolated location by something not quite known—by the reader anyway. I wanted it mysterious and intriguing at once. And this is what I came up with:


The steering wheel vibrated in my hand as the sedan shimmied across the corrugated dirt road. I wiped sweat from my brow. A blackbird watched from a broken down fence as I concentrated on the rough path, steadily moving north between Lakeside’s yellow-brown slopes and the Grassy’s hump-backed silhouette.


I still like that opening and I think it did (overall) what I wanted it to do, but it pushed the story’s action too far away. So I changed it to this:


When the ochre stained hill came into view I eased the sedan left and drove down a mild depression—tires crunching through shattered rock—and stopped next to a small juniper stand. The engine ticked and groaned before settling into silence. The landscape’s emptiness an illusion. An Air Force bombing range fifteen miles north and west. A television relay station, antennas spiraling skyward, sitting on the Lakeside’s treeless ridgeline to the east. And farther still, the sullied shoreline marking the Great Salt Lake’s shallow waters.


And damn if I didn’t like that opening, too. But it played hell with the story’s pacing. It was still too slow and I wanted, like every short story writer, to capture the reader’s interest immediately. So I changed it to this (which is how the story was published):

I was awakened by Bobby Helms singing Jingle Bell Rock. An ironic ringtone because it was July and the only jingling I’d heard in months was the simulated sound of coins cascading from slots that were programmed tighter than a billionaire’s wallet.
“Ford? You awake?” Jenkins’ voice booming in my ear.
“Sure, I’m awake.” My eyes were still closed.
“We have a problem.” Jenkins was tense. A quaver of anticipation and fear and something else I couldn’t label whisked into a frothy hum I imagined his imported girls heard every time he unzipped his pants.


And damn if I don’t love this opening scene. It shows us something about Jimmy Ford. He listens to Christmas music in July (as a ringtone anyway), he hangs out in casinos, and Jimmy works for a guy, Jenkins, who he doesn’t much like.
Now if only I could make that happen in the first draft instead of the third or fourth or fifth.

Email ThisBlogThis!Share to TwitterShare to FacebookShare to Pinterest
Labels: My Stuff 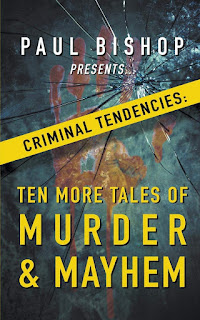 I have a brand new short story in an anthology that hit the street last week. The anthology is Paul Bishop Presents… Criminal Tendencies. There are ten crime stories from Paul Bishop, Eric Beetner, Richard Prosch, Michael A. Baron (and others), including my dark psychological tale “Awake”.

The development of “Awake” has a long and sordid history that spans across nearly two years and I think the end product is pretty good. The opening paragraph changed a handful of times (as did most everything else in the story), but here is the final version:


“The old man’s eyes were hot, but the back of his head was ice cold. The neglected kitchen—dirty dishes stacked in the sink; the counter littered with empty food packaging—disappeared as he focused on the tiny old-fashioned micro-cassette sitting on the cracked laminate kitchen table.”

I hope you enjoy it (if you choose the read it).