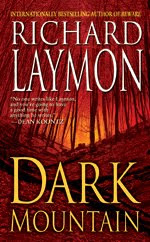 Scott and Flash are old Air Force buddies. They served together in Vietnam, and while they have grown apart over the years since the war they are still friends. The two men decide it’s time to renew acquaintances and plan a joint backpacking trip into the backcountry of central California. It is a trip that both families are looking forward too, with the exception of the usual grousing from Scott’s teenage daughter Julie, and Flash’s twin girls. It doesn’t help Julie’s mood that Scott’s new girlfriend, Karen, is along.

The troupe sets off on a weeklong pack trip in good spirits. Their route is set, and the terrain is rugged and more than a little beautiful. The two older children—Julie and Flash’s teenage son Nick—take an instant liking to each other. The families congeal nicely, and Mr Laymon deftly creates their interpersonal discourse and squabbles with his usual light and charming touch. The dialogue and patter have the flair of both likability and believability.
The trip takes a downward turn when one the Flash’s twin girls sprains her ankle and the group has to make an unplanned stop for the day at an ugly treeless lake called Lower Mesquite. The park ranger told them to steer clear of the lake because there are several lakes with much more to offer. The group, however, makes the best of the unplanned stop and settles in for the night. Unfortunately their trip takes another unpleasant turn when Karen is brutally attacked in the short hours of the night.

Dark Mountain is an example of what Richard Laymon did well—its characters are likable, in that foreshadowed horror manner that keeps the audience a touch uneasy about getting too close because they know that the character will likely not make it to the end. The story is tight and controlled. It is dialogue rich, and the action is well placed to build both suspense and unease.
There are also glimpses of Laymon’s weaknesses, or, more aptly, his excesses. The dialogue is rich and, at times, humorous, but at moments it is overdone and annoying. The characters have a habit of over talking the situation and curbing its potential suspense. There are also brief, much more brief than usual, graphic sex scenes, including a rape scene, that tend to be less pivotal to the story and more ludicrous. Although the graphic sex has a teenage boy wholesomeness to it that only Richard Laymon could accomplish.
Dark Mount

ain is not in the top echelon of Richard Laymon’s work—The Traveling Vampire Show, In the Dark, Night in the Lonesome October—but it is a solid horror-suspense novel. It opens as the standard wilderness horror story, but Laymon takes it to unexpected places. It twists from the backwoods of California to the streets of Los Angeles. There is witchcraft, murder, violence, and even redemption. It is a novel that will appeal to fans of Richard Laymon, horror, particularly horror films, and even those with a taste for suspense. 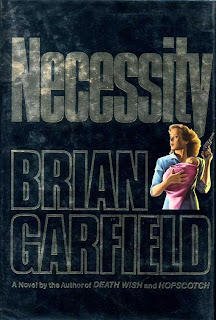 It has been nonstop busy at my house the past few months and yesterday as I was browsing the stacks of a used bookshop I found myself thinking about the terrific books I read in 2009, and there were many. I rediscovered the work of several classic suspense, crime, and western novelists. The best of the bunch was probably the work of Brian Garfield.He hasn't published a new work of fiction since the late-1980s, which is a shame since he really redefined the suspense novel with his novel Death Wish and then kept getting better and better. And then simply stopped writing, or at least publishing, fiction.

The following is a review of Brian Garfield's Necessity. It was the first of several Garfield novels I read last year, and when I think about it I can't help but smile. It is a terrific suspense novel with as much flair and style as you will find in the genre. It originally went live July 6, 2009.


“It’s the sixth day after the theft. She pulls off the Interstate in Tucson, a city she has never seen before. According to the atlas it is a county seat and the second largest city in Arizona—population half a million people.”

Matty LaCasse is a former model and now the wife of a wealthy New York construction magnate. She is the recent mother of a beautiful and healthy baby girl. She is on the run, alone, scared and hell-bent to get her daughter back.
Matty tracks across the American West, a briefcase full of cash with her and a plan; she needs a home away from her pursuers, but to do so she needs to become someone else. An entirely new person that no one from her old life will recognize or even associate with the person she was.

Necessity is an absolute firecracker. It opens with a white hot flash and never lets up—the action is tight and it is expertly used as a tool to ratchet the suspense from vague dread to outright terror. The characters are perfectly molded into dimensional people who are likable, terrifying and, most importantly, believable. The storyline is linear and sharp with enough false leads and psychology—mostly Matty’s—to keep the reader off balance and avidly turning the pages—which is all terrific, but Mr Garfield also flavors the story with technical information about creating new identities and, more importantly, erasing an original identity. He creates a world that is real and absorbing without slowing the story with too much detail and information.

The narrative is smooth and inviting. It is told in a matter-of-fact fashion, and with the seldom-used present tense—“She lets herself in and double-locks the door and slumps into the threadbare easy chair. Strength flows away as if a drainplug has been pulled.”
Necessity is an example of what a thriller should be--quick, hard, intense, and thrilling. It is a story that was published twenty-five years ago, but it still has a freshness and originality that makes it compelling and entertaining reading. In short, it is a novel that should not only be read, but that should be savored.
Posted by Ben Boulden at 4:41 PM 1 comment:

The Internet, at least the few sites I visit regularly, has been abuzz with the remake of the 1970's television series "The Rockford Files." I haven't read a positive spin about the new series remake yet. I was too young to remember "The Rockford Files" when it originally aired. Instead I was introduced as a teenager in the late-1980s in syndication, and then the eight or so television movies made in the 1990s.

Now Tom Selleck, who guest-starred in two episodes, weighs in about the difficultly of recreating the series without James Garner in a brief interview with Zap2It. In a sense it would be tantamount to remaking "Magnum, P.I." without Tom Selleck, a difficult chore at best.

"They ought to cast Jim Garner," Selleck tells Zap2it. "I'm a little prejudiced because he was really a formative influence on me, even a mentor in so many ways, even though he probably wouldn't admit to it if he was aware of it.

"Dermot Mulroney seems like a fine actor in the work I've seen him do, and this has nothing to do with him -- but when you think of 'Rockford,' you don't remember 'that episode about the bank robbery,' you remember [Garner] making you laugh."

Click Here to read the rest of the article.