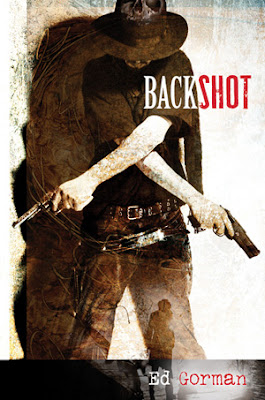 2016 was a great year for reading. I finished 56 titles, which is four short of last year’s mark. The majority of the titles were fiction and my nonfiction reading tumbled to only a few books; something I will need to correct next year.

I started 2016 with my two almost always recurring goals:

In the past I have listed each new author, along with the title I read, but this year the list is unwieldy; so, I decided instead to list the best reads by authors new to me (in the order read):

I returned to old favorites fewer times than I have in the past, but three authors accounted for 11 titles, which is approximately 20 percent of the total for 2016. I read five by Ed Gorman, four by Stephen Mertz, and two by Garry Disher.

Now all that is left is my top five favorite novels of—at least that I read in—2016. No rules, except no repeats. If I previously read the book (which happens many, many times at my house), it is not eligible for the top five. It was difficult to pare the list to five, and there were two or three that were cut from the list that I wish hadn’t been. With that said, my five favorite novels of 2016:

5. Sherlock Holmes: Zombies Over London by Stephen Mertz. A Sherlock Holmes action yarn with zombies, flying machines and an evil plan for world domination. It is a solid, well-told, original tale that is both faithful—specifically in its tone and language—to the original stories and wholly new and unique. Read the Gravetapping review.

4. Backshot (2012) by Tom Piccirilli. A hybrid crime-western that is a touch Richard Stark, but wholly Tom Piccirilli. The plotline is Stark—the protagonist is betrayed by his partner and spends the rest of the story getting even—but it is stylistically and thematically Piccirilli. It is related to Ed Gorman’s short western novel, Backshot (1902). Read the Gravetapping review.

3. Dreadful Tales by Richard Laymon. A collection of twenty-five short stories that showcase Mr. Laymon’s talent as a writer. There are early crime stories, including “A Good Cigar is a Smoke” and “Roadside Pickup” with its clever and surprising ending, and horror stories, mostly the gruesome (and fun) type he is known for, like “The Grab” with a small-town bar setting and a deadly game played nightly and “Into the Pit”.

2.  The Mistletoe Murder by P. D. James. This is an unusual title to see here, but it is an old school Agatha Christie-style collection of four superior stories by Ms. James. The plotting is tight, the puzzles exquisite with a playful and witty style. Read the Mystery Scene review.

1.  Backshot (1902) by Ed Gorman. This is a brilliantly rendered noir western, by the best writer to ever write in the genre, and it reads very much like an old Gold Medal crime novel—a man trapped in a situation far out of his control, his downfall brought by a beautiful woman, and his redemption in the arms of another. It is developed with Ed Gorman’s masterful colors of humanity and it is entertaining as hell. Read the Gravetapping review.
Posted by Ben Boulden at 8:30 AM 2 comments: 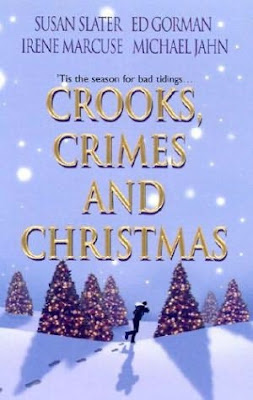 I was intending to review a few Christmas stories on the blog this year, but time and other commitments got the better of me so I decided to dust off this review from December 2008. It is a little-known Sam McCain novella published in Crooks, Crimes and Christmas (Worldwide, 2003) titled “The Santa Claus Murders” and written by Ed Gorman.

Sam McCain’s only reason to attend a high school reunion / Christmas party is a hope there will be attractive, available, attentive former female classmates. The party is at the home of the wildly wealthy Don Lillis, who inherited the house and a steel mill from his father. On his arrival, Sam finds the usual clustering of people. The wealthy and upwardly mobile, the weirdoes, the blue-collar-types, all congregating in their respective groups. Sam has the uncanny ability to move from group to group, but he doesn’t quite belong to any of them.

The party turns bad when Bob Nugent, the class drunk, is found in the guest room with a knife in his throat. Bob Nugent was the kid everyone expected to succeed. In school, Bob worked hard, was kind, friendly and the teachers loved him. He was, to Sam’s thinking, a brownnose of the first order. But something went wrong for Bob during his college years and he started drinking. The party screeches to a halt when Bob’s body is found and the unlikable and incompetent Sheriff Cliff Sykes, Jr is called to investigate. Cliffie, as he is called behind his back, makes all the wrong assumptions and McCain decides to solve the mystery on his own for two reasons: to make Sykes look the clown, and make sure the right person is brought to justice.

“The Santa Claus Murders” is Sam McCain at his best. He is young, endowed with the wisdom of much older man, intelligent and savvy at why people do what they do, and cynical with a perfectly complimented amount of optimism. He is a kid that doesn’t quite fit a category—he grew up in the poor section of town, but he is a college graduate with his own small law practice. He is an ideal Ed Gorman character: intelligent, cynical, tough, realistic, and yet hopeful and wistful at the same time.


The mystery is perfectly executed. The killer is revealed only moments after the reader figures it out. The supporting cast is top-notch. Cliffie Sykes is his usual gruff and annoying self. The Judge is kind and vindictive in a swift, judgmental and condescending manner. And everyone else plays their parts perfectly.
Posted by Ben Boulden at 10:45 AM 1 comment: 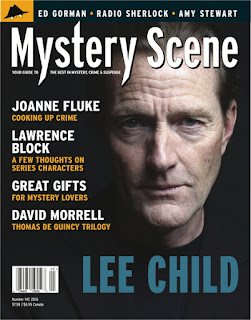 The latest issue of Mystery Scene Magazine—No. 147—is at a newsstand near you. It is MS’s special Holiday Issue and it is packed, as usual. It features a very nice remembrance of Ed Gorman, an excellent interview with David Morrell, Kevin Burton Smith’s annual Gift Guide, and a brilliant article by Lawrence Block about series characters.

It also features my first Mystery Scene byline, with my short story review column, “Short & Sweet: Short Stories Considered.” A column I’m excited about, and, at least parts of, are exclusive to the print magazine. In the column, I discuss:

P. D. James’ collection The Mistletoe Murder and Other Stories.

In Sunlight or in Shadow, a mostly crime anthology with stories inspired by the paintings of Edward Hopper edited by Lawrence Block. 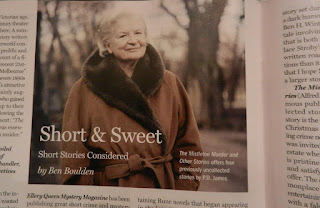 Issue No. 147 also includes two book reviews I wrote. The titles: Edgar Allan Poe and the London Monster by Karen Lee Street, and The Strivers’ Row Spy by Jason Overstreet.

The Strivers’ Row Spy is a moody, and seemingly accurate, historical mystery set in Harlem of the 1920s.

The reviews are available online at Mystery Scene’s website—click the titles above.

Mystery Scene is available at many newsstands, including Barnes & Noble, and available for order at MS’s website.
Posted by Ben Boulden at 3:00 PM 5 comments:

The Last Man on Earth is an anthology featuring post-apocalyptic stories. It was published as a paperback original by Fawcett Crest in 1982, which is the very edition that caught my eye. The artwork perfectly captures the theme of the stories – a solitary man, a backpack on his shoulders sitting atop a dune with a skull and dead bird below. The artist: W. C. Barlowe. 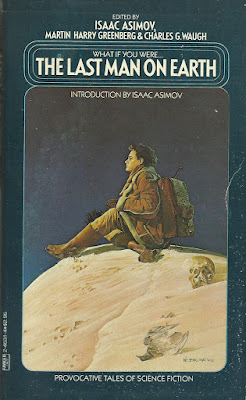 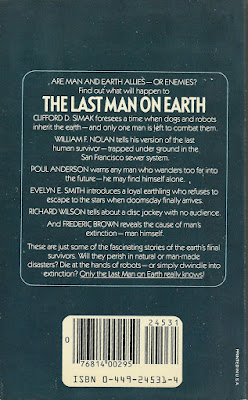 The opening paragraph (from the story “The Underdweller” by William F. Nolan):

“In the waiting, windless dark, Lewis Stillman pressed into the building-front shadows along Wilshire Boulevard. Breathing softly, the automatic poised and ready in his hand, he advanced with animal stealth toward Western Avenue, gliding over the night-cool concrete past ravaged clothing shops, drug and ten-cent stores, their windows shattered, their doors ajar and swinging. The city of Los Angeles, painted in cold moonlight, was an immense graveyard; the tall, white tombstone buildings thrust up from the silent pavement, shadow-carved and lonely. Overturned corpses of trucks, buses, and automobiles littered the streets.”


This anthology is one of the seminal works in my adoration of both classic science fiction and short fiction. It introduced me to the work of Edmond Hamilton, A. E. Van Vogt, Frederic Brown, and the short work of William F. Nolan. It, beyond the nicely executed cover art, is very much worth having on your bookshelf.
Posted by Ben Boulden at 9:00 AM 4 comments: