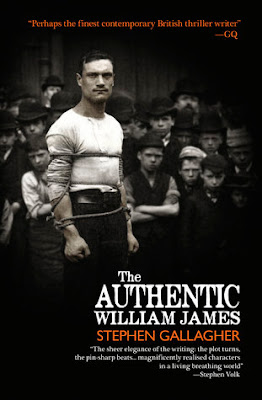 The Authentic William James is British writer Stephen Gallagher’s third novel featuring Sebastian Becker. Becker is a former Pinkerton detective and current Special Investigator for the Lord Chancellor’s Visitor in Lunacy. His purview is to investigate and apprehend wealthy and dangerous lunatics whose “resources might otherwise make [them] untouchable.”


It is 1913 and Becker is baffled when he is sent to interview William James—the owner of a Wild West Show touring small venues around England. James has been arrested for the arson of an English seaside theatre that caused the death of more than fifty people. A crime without an obvious motive, a criminal, William James, without wealth, and instructions opposite from Becker’s usual. He is to collect information that insures William James cannot be labeled insane during the trial. When James escapes custody Becker is tasked to find him and the manhunt, taking him from London to Philadelphia to a young Hollywood, is more personal and mysterious than anything Becker could have imagined.


The Authentic William James is a brilliant early-twentieth century crime novel brimming with a macabre atmosphere and, as the story shifts to America, a vibrant late-Western setting. Sebastian Becker is a likable character with wit, an admirable sense of right and wrong, and a conscientious view of humanity. A character similar to what the late-Ed Gorman populated his stories with, and his working class demeanor is ideal for both the novel and the reader. The plot is tricky, but precise and believable, with a climactic twist that is both perfect and surprising.