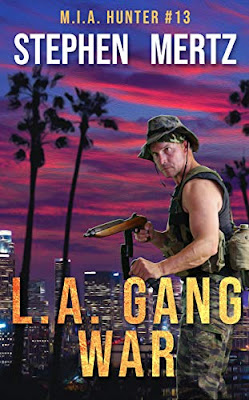 A three-man strike force accustomed to rescuing prisoners of war in the jungles of Vietnam is stateside on a rogue mission in Los Angeles. Mark Stone, known as the MIA Hunter, is asked by an old war buddy, now a deputy chief with LAPD, to help rescue Rick Chavez from a Colombian drug cartel. Chavez is a Pulitzer award winning journalist who has been writing a series of hard and insightful articles about the drug trade in L. A. The articles have enough detail that the LAPD and the drug gangs—Crips, Bloods and their Colombian suppliers—want to know where his information is coming from.
When Stone and his team arrive on scene, Chavez is being held prisoner in a palatial home in San Clemente; a few doors down from Richard Nixon's house. It takes the team only a few minutes, several hundred rounds of 9mm lead slung by MAC 10s, some smart one liners, and a close call or three, to pull Chavez out of the house. But this is the beginning for the MIA team because as the team is exfiltrating from the firefight, Stone sees a familiar face. A face that belongs to a man who tried to kill Mark Stone in Vietnam.
MIA Hunter: L. A. Gang War—the thirteenth entry in the series—is an entertaining example of the men’s adventure mania of the 1980s. Originally published in 1990 (an honorary member of the 1980s), it is a time capsule of the era, capturing society’s anxiety with an escalating war on drugs, violent street gangs spreading the poison and in the process claiming entire neighborhoods, all in the shadow of America's defeat in Vietnam. It is non-stop action, accented with betrayal, revenge, and the MIA team’s seeming endless supply of bravado and super hero combat skills. There is also a touch of humor, if you look closely, and even a big idea or two. L. A. Gang War is a top-notch example of both the series and the genre.

DEATH OF A CITIZEN by Donald Hamilton 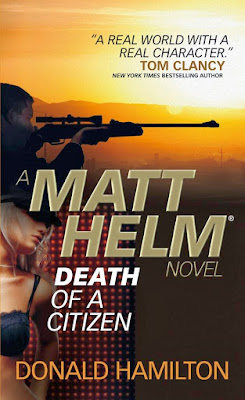 Matt Helm is a solid citizen. He is married with three children. He makes a living writing popular novels (western’s mostly), and lives with his family in Santa Fe, New Mexico. His picture perfect American dream is mangled when Tina, an operative he briefly worked with in Europe during World War II, walks through the front entrance of a cocktail party. She passes an old signal to Matt—“I’ll get in touch with you later. Stand by”—and in an instant (and without much fuss) Matt’s idyllic existence shatters.
Death of a Citizen is the first (of 27) Matt Helm novels, and it is absolutely terrific. In the opening sequence Helm is an everyman; likable and stable with a pretty wife and a family, but it only takes a few hours for his old habits to take over. It starts with a dead woman in his writing room, and then a confrontation with Tina who, after some convincing from Matt, weaves a fantastic story about a Soviet agent hunting a nuclear scientist working for the Atomic Energy Commission at Los Alamos.
The action is convincing, the prose is smooth and cool—
“Suddenly I was feeling fine. You can stay tense only so long. I was over the hump. I was driving ten miles out of the way, with a corpse in the bed of the truck, just to take a worthless alley cat home.”
And the plot is as tight and smooth as a guy wire. There is more than the usual backstory about Helm’s World War II exploits, and post war life, but it is done without interrupting the forward momentum of the plot. Even better, Mac—the leader of the “organization” Matt worked for, and is once again working for—makes an appearance in the field, and Helm’s doubt and operational rust give him an element of believability.
Death of a Citizen is the first of the Matt Helm novels, but it is as convincing, urgent, and well written as any. In a sense it is the primer. It introduces Helm, the organization, and everything it is, which is essentially a kind of counter intelligence wet work squad. It is the cold war on a small field. The best part, the citizen who lost his life (from the title) is Helm himself, and what he gains is a certain freedom, his code name Eric, and an outlet for his violent nature.
Death of a Citizen was originally published by Gold Medal in 1960, and it was recently reissued as a paperback by Titan Books. 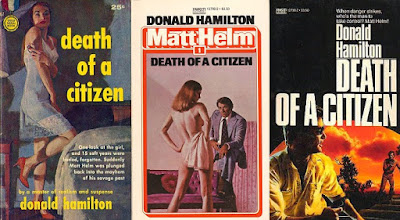 
Terror in the Town, by Edward S. Aarons, was published as by Edward Ronns as a hardcover by Armchair Mystery in 1947. The edition that caught my eye was the paperback edition, with Aarons’ own name on the cover, published by Manor Books. The cover is, simply put, cool and I love how the bikini top melts into a dust trail. The artist: Unknown (to me at least). 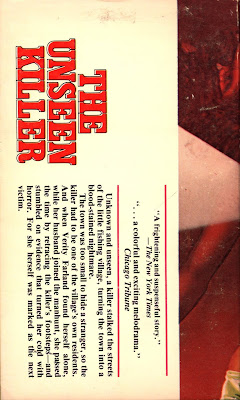 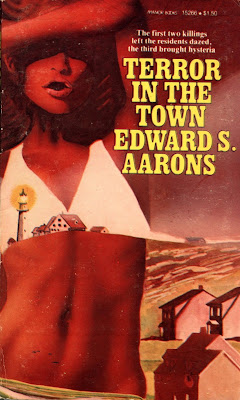 The opening paragraph:
A pale moon shone on the water, and cold stars danced in the sky. Under the full moon, the tide along the Pelican River raced wide and deep, tumbling toward the sea.
Edward S. Aarons wrote somewhere around 30 novels as by “Edward Ronns”.
Posted by Ben Boulden at 6:00 AM 3 comments: