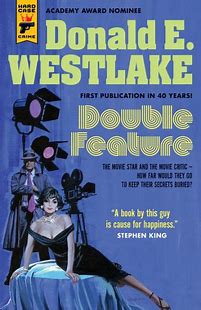 Double Feature, a 2020 release from Hard Case Crime and originally published as Enough in 1977, includes a short novel and a novella. The novel, A Travesty, is a slanted whodunit, which is more of a can-he-get-away-with-it since the protagonist – a film critic – is the murderer doing anything he needs to do to stay out of prison. A humorous story that begins with the genre’s usual, but grows into something quite original. The unexpected, but perfectly ironic ending, gives it a smile-inducing appeal.

The novella, Ordo, is more hardboiled than its pairing, and my favorite of the two because of its working class narrative. A career navy man, Ordo, discovers his short-time wife of fifteen years earlier has become a Hollywood sex symbol. She is unrecognizable as the girl he knew, and Ordo wants to figure out how his ex-wife became someone else. What he discovers is painful and melancholy, but has a purely American vibe of creating your personal mythology; similar to F. Scott Fitzgerald’s The Great Gatsby, but much less sinister.

Double Feature is a great pairing of tales, told in different styles and with contrasting themes, that showcase Westlake’s brilliance as a storyteller.