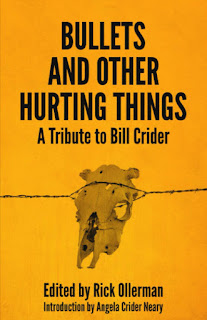 The Bill Crider tribute anthology, Bullets and Other Hurting Things, edited by Rick Ollerman (Down & Out Books), hit the street a few days ago. It features 20 original stories written in honor of the late Bill Crider. I’m honored that my story, “Asia Divine”, somehow made the cut since there are a bunch of great contributing authors. Joe R. Lansdale, Charlaine Harris, William Kent Krueger, Bill Pronzini, James Sallis, James Reasoner, are only a few.

“Asia Divine” is set is Utah’s West Desert, from the Great Salt Lake’s Stansbury Island to somewhere near the Bonneville Salt Flats.

Here are the first few lines of “Asia Divine”:

Detective Mike Giles gagged on the stink as the Maglite’s glare bobbed across the dim and ragged interior of the bus. He leaned against the pock-marked pole next to the torn-out driver’s seat, a hand cupped over his mouth and nose.

From the back of the bus a disembodied voice said, “It gets worse.”

The simulated whir and click of a digital camera saturated the confined area, and the dull ache in his head blossomed into a roar.

As his vision recovered, another flash bounced. The camera clicked.

“Jesus, Danny.” Giles stroked his throbbing head. “Hold off on the photos until I have a look, huh?”