STAR COURIER by A. Bertram Chandler 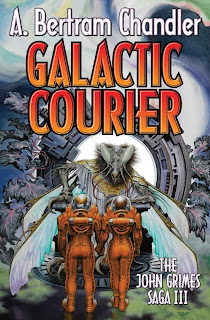 John Grimes is the Owner-Master of the deep space pinnace Little Sister.  Little Sister is a modified solid gold hulled ship, which was given to Mr Grimes by his former employer Michelle, Baroness d’Estrang, of El Dorado “in lieu of back pay and separation pay.”  A pinnace is a light sailing ship used as a tender for a larger ship, but Little Sister is fully equipped and capable of autonomous galactic space transit.


Grimes is recently unemployed and finds himself on Tiralbin looking for a mail contract.  The Interstellar Transport Commission has the mail contract for Tiralbin, but it is notoriously slow for the smaller provincial planets off the main trade routes—


“Grimes recalled especially a parcel that his colleague had torn open with great indignation.  According to the postmark it had taken just over a year to reach Lindisfarne Base.  It contained a not readily identifiable mass that looked as though it would have been of interest only to a geologist.  It was, in fact, a birthday cake that had been baked by the disgruntled lieutenant’s fiancée.”


Grimes is on planet for only a few hours when a cargo to the small wealthy planet Boggarty is offered.  The cargo is a rush consignment with one hitch: the Superinteding Postmistress Tamara Haverstock must accompany the cargo.  The expected pleasantries happens between Grimes and the postmistress until Little Sister’s inertial drive breaks down, and they are boarded by the Shaara, a very advanced bee species.
Star Courier is a simple, straight forward space adventure.  It is simple, but the sheer amount of action is extraordinary—Grimes moves from budding entrepreneur to casa nova to prisoner to conquering diety.  In short, the story is large, but it is played out on the ground and kept not only manageable by Mr Chandler, but also entertaining.  The prose is simple, crisp, and very readable.  It perfectly matches the story style, and creates a certain low level buzz of tension by pushing the narrative forward quickly and without any overwrought dramatics.


Star Courier is very unlike most of the science fiction currently being published.  It is short, full of adventure, and includes very little—no?—philosophy.  It is something very close to what Ace was publishing in the 1960s and 1970s, and if you enjoy the older science fiction—or maybe it is better described as space adventure—than you will have a great time with this one.
Interestingly, I found a quote from Mr Chandler regarding his work in his entry in Contemporary Authors Online—


“I write science fiction because I like it.  More than one unkind editor has commented that my stories are ‘costume sea stories.’”


Star Courier felt very much like a sea story; from the use of the term “pinnace” to describe Little Sister, to landing procedures in port, to the use of mainline trading routes.  However space travel is inherently comparable with sea travel due to the long distances involved and the solitary self-sustained journeys.
Star Courier was originally published by DAW in 1977, and it is currently available as both an ebook and in an omnibus print edition (both trade and mass market) titled Galactic Courier: The John Grimes Saga III, which also includes To Keep the Ship, Matilda’s Stepchildren, and Star Loot. 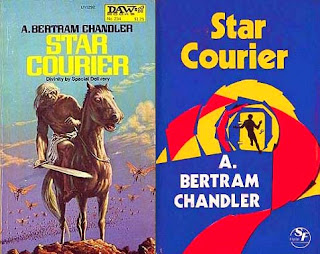 Posted by Ben Boulden at 1:27 PM No comments:

Don Pendleton is best known for his men’s adventure series The Executioner.  He created it and wrote, more or less, the first 38 titles in the series before he handed it off to Gold Eagle books and a host of ghost writers.  Mr Pendleton’s later work never found the same success as The Executioner, but he wrote a series of private detective novels featuring an ex-cop tough guy named Joe Copp.


Copp appeared in six novels between 1987 and 1992.  They were published in hardcover by Donald I. Fine, and paperback (except the first) by Harper.  There is something almost juvenile about the stories—black and white themes, hard as nails action, and prose as hard as Mickey Spillane—but the stories are vivid, exciting, and very entertaining.

Below is a listing of the books in chronological order with the cover scans of the original hardcover and paperback editions of each title, excepting Copp in Deep, which I was unable to find a scan for the hardcover.
Copp for Hire.  Published by Donald I. Fine in 1987 as a hardcover, and reprinted in mass market by Lynx Books in 1988. 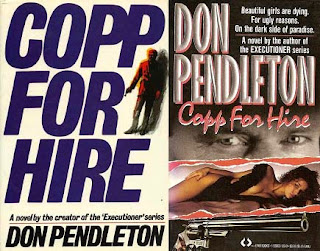 Copp on Fire.  Published by Donald I. Fine in 1988 as a hardcover, and reprinted in mass market by Harper Paperbacks in 1989.  Read the Gravetapping review. 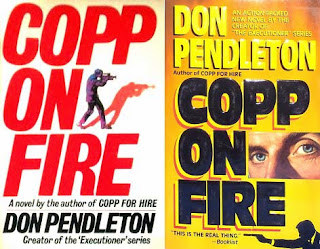 Copp in Deep.  Published by Donald I. Fine in 1989 as a hardcover, and reprinted in mass market by Harper Paperbacks in 1990.  If anyone has a scan of the hardcover I would be much obliged for a copy. 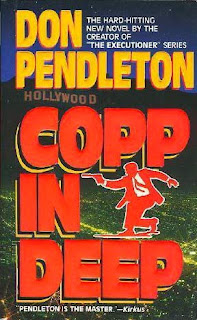 Copp in the Dark.  Published by Donald I. Fine in 1990 as a hardcover, and reprinted in mass market by Harper Paperbacks in 1991. 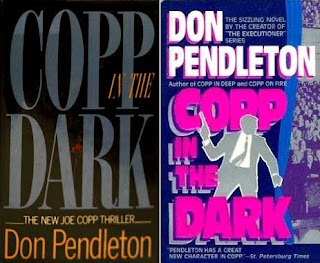 Copp on Ice.  Published by Donald I. Fine in 1991 as a hardcover, and reprinted in mass market by Harper Paperbacks in 1992. 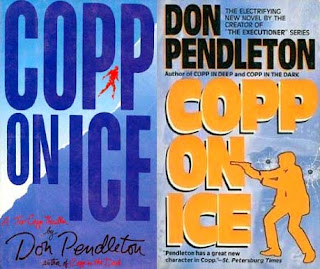 Copp in Shock.  Published by Donald I. Fine in 1992 as a hardcover, and reprinted in mass market by Harper Paperbacks in 1993. 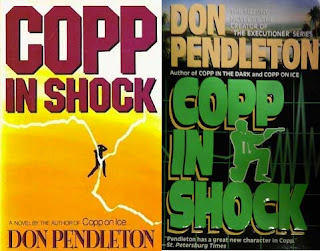 Posted by Ben Boulden at 9:45 PM No comments:

THE CASTRO DIRECTIVE by Stephen Mertz 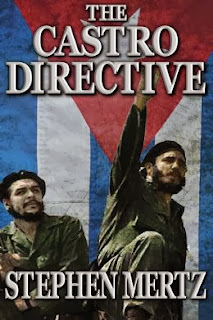 Stephen Mertz is an unheralded, and much undervalued, writer of action and suspense novels.  He has steadily put together an impressive body of work since the late 1970s.  He was one of the original writers of the post-Don Pendleton, The Executioner series, and he created a few of his own successful men’s adventure series in the 1980s, including M. I. A. Hunter and Cody’s War.  But the meat of his work is what he has produced over the last decade starting with Night Wind, and including the excellent novels The Korean Intercept, Dragon Games, and Hank & Muddy.

I read his most recent novel The Castro Directive in close to a single sitting.  It is a straight action thriller with a dollop of intrigue, and a touch of betrayal.  The year is 1961.  The CIA sponsored Bay of Pigs invasion of Cuba is in its final phase and a high level leak is passing information about the invasion to the Castro government.  When a CIA man is killed on a deserted Cuban beach the Kennedy administration brings in a troubleshooter named Michael “Graveyard” Morgan.  Graveyard is a Green Beret sergeant stationed in Vietnam as an advisor, and he is a man who gets the job done.


Morgan’s job is to find the mole.  It takes him from the streets of Miami to Nicaragua to Cuba, and back again.  There is an interesting sub plot involving Graveyard’s daughter and wife, and the cast of characters includes President Kennedy.  The JFK described is long on intelligence, but short on marital fidelity.  One of my favorite presidential scenes has Kennedy reading a James Bond novel poolside.
The Castro Directive’s plot is straight forward, but with a few well timed and satisfying surprises.  The prose is stark and, in places, quite vivid—
“The only sound for the past ten minutes had been the lapping of gentle swells against the low, black-painted hull.  The V-20 speedboat rode the swells one hundred yards offshore.  Sleek, sixty-three-feet in length, the launch bore no name or markings.”
Graveyard is an action hero from the old school.  He is tough, single minded, and willing to do, and risk, anything to get the job done.  The added element of his family, which Mr Mertz ties into the story admirably, adds a little meat to the bone and makes the story more interesting.  The real charm of The Castro Directive is the setting—1960’s South Florida, especially—and the straight forward action, which is a specialty of Mr Mertz.

The Castro Directive may be Stephen Mertz’s best novel to date—and each is seemingly better than the last—but even if it isn’t his best, it is damn enjoyable anyway.

Posted by Ben Boulden at 8:00 AM No comments: