The Jailbird, Wendover, and "Con Air"

There is a dusty little desert town straddling the Utah-Nevada border fringing the southern edge of I-80. A ninety minute run from Salt Lake City. The dull crystalline salt flats hustle into the rocky foothills of the Silver Island Mountains. The flats stretch for miles. In the winter they flood with water, and the summer finds rocket cars, motor cycles, and just about anything else on two or four wheels, playing for speed on its flat, straight surface.

And it has a history. It was built in 1908 as a railroad town, and pretty much stayed that way until World War 2 brought an Army bomber training base. If it was a B-24, and flew in Europe, there is a good chance plane and crew touched Wendover. Its most famous trainees were the crews of Enola Gay, and Bockscar. The fliers and B-29s that dropped “Little Boy” and “Fatman” on Hiroshima and Nagasaki, Japan. The old structures, clapboard barracks, box style hangars, concrete swimming pool, rot in the dry air. A light blue sky above, and a faded alkaline earth below.

The casinos came in the early-1950s. They came to lure the Mormon population of Salt Lake City across the border to sin. And it worked. The Nevada side—called West Wendover—has prospered. The casinos hatched a fully functional small city—schools, neighborhoods, parks, parents, and children. The east has been stagnant, and poor. Its only draw is the collapsing old base, the airport, and an old propellerless C-123 Provider with a sign identifying it as the airplane used in the film “Con Air”.

Its tires flat, a wooden ramp providing access to its starboard door. A fading blue runner, or cheatline, on its silver fuselage. Faded block letters, just aft of the wings and above the door, read: UNITED STATES MARSHAL. The number N709RR painted on the tail. The words “The Jailbird” below an eagle with a ball and chain in its talons on the nose. The markings are right; matching perfectly with the “The Jailbird” from the film. The interior is torn apart. A cavernous bay occupies the majority. Bare aluminum walls, the odd wire lifting from the surface. A Gatorade bottle jammed in an I-beam near the ceiling.

The cockpit is barren. Aluminum shine with little else. Two small windows stare at the desolate desert. The original stick—wheel, I think, in this case—is replaced with something like a steering wheel from a bus. If it ever flew it was long ago. In the film the old airbase fronted for “Turner Field”; the desert location where the convict crew landed and most of the film’s action happened. If you look around you can see it. The unpainted clapboard buildings. The rotting airplane hangars, a vintage control tower—now restored—and a swimming pool, its surface covered with peeling blue paint where Steve Buscemi likely took tea with an unsuspecting girl and her dolls. 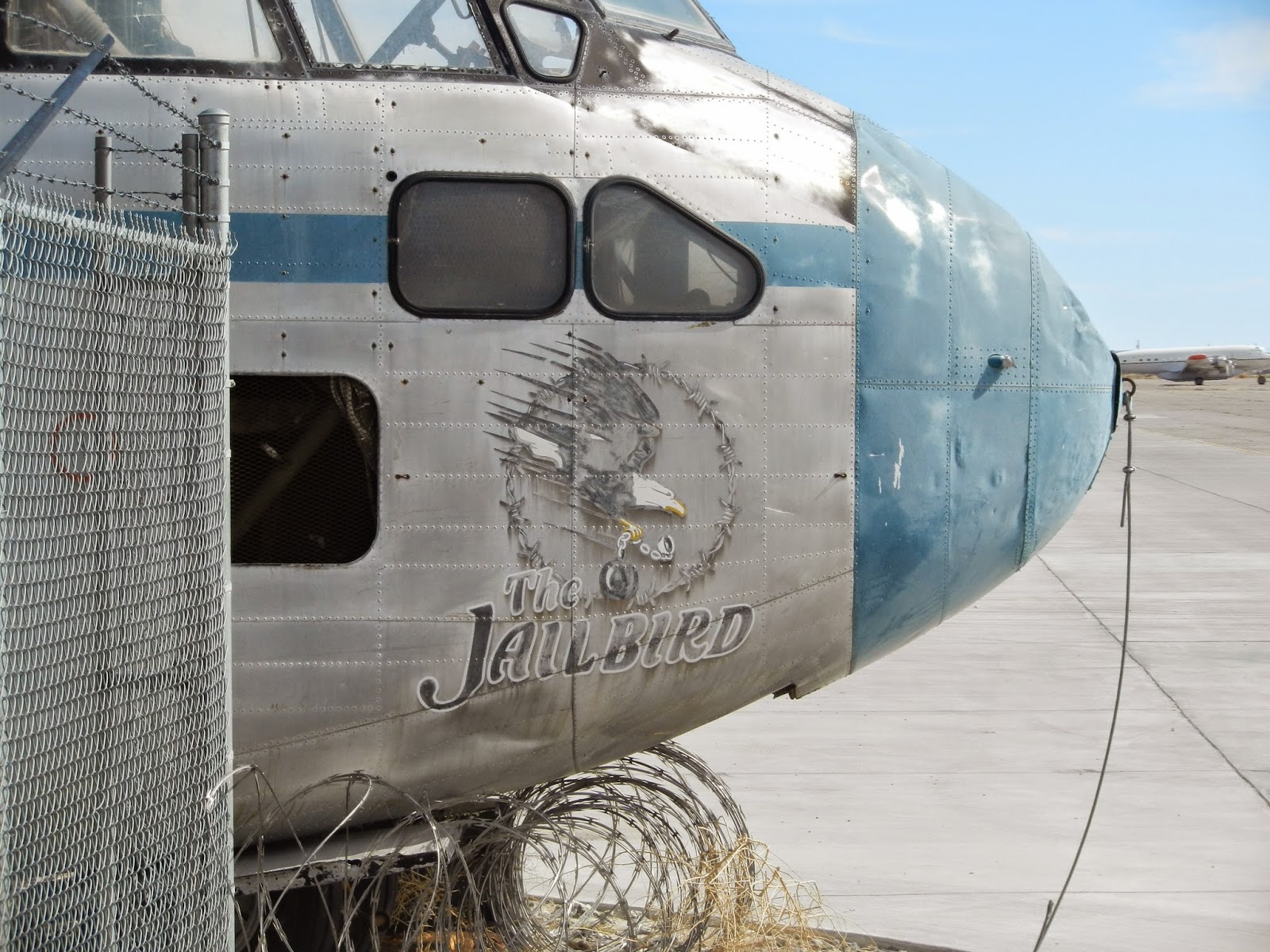 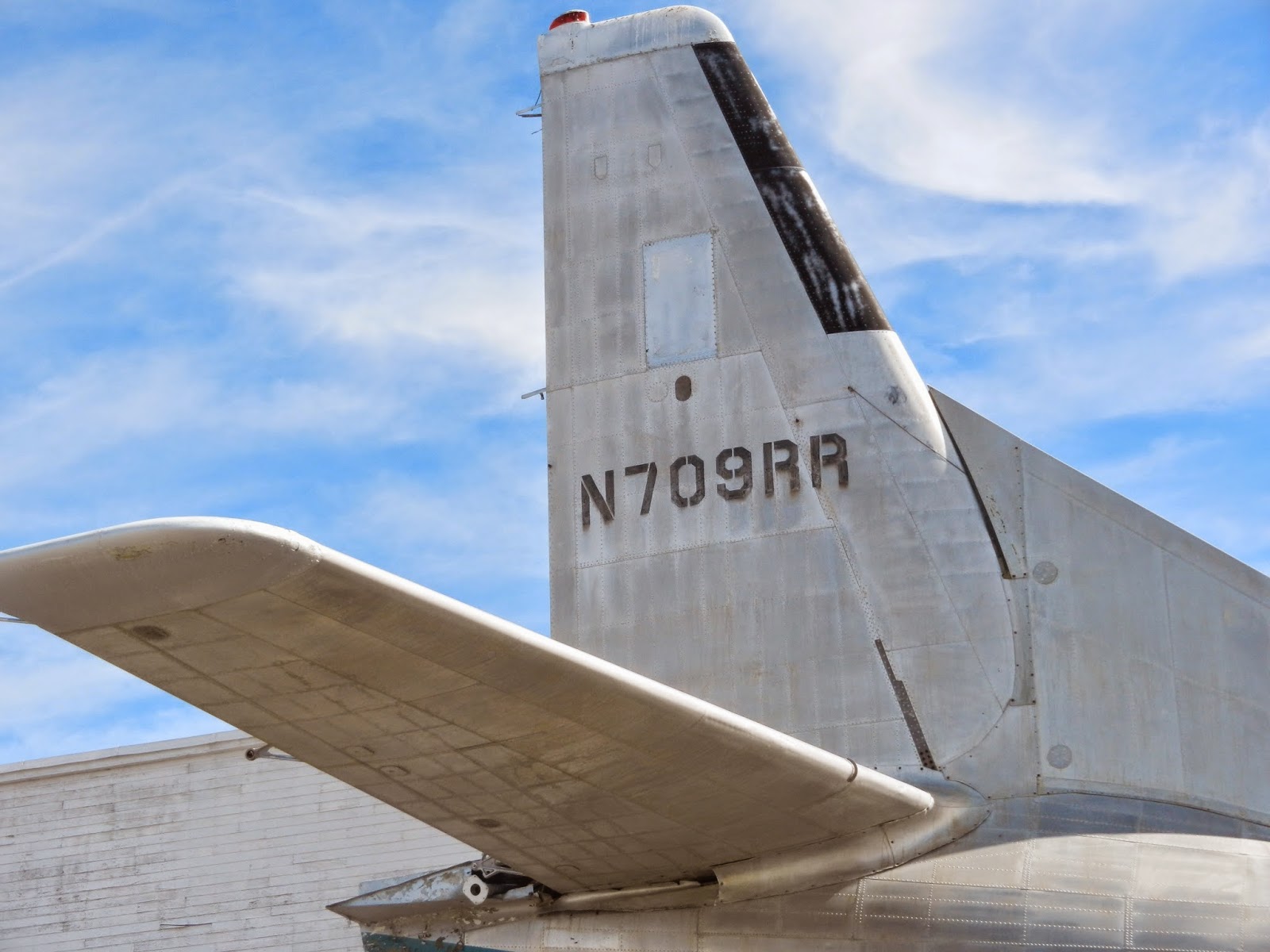 I have wondered about the plane for years. What its role in the film actually was, and, if it was airworthy then, why leave it to die? I did some research, finally, and what I found was as interesting as the airplane. It is a movie star, or nearly one. “Stand in” is more accurate. It was never flown in the film, but it was used as the Earth bound plane for the desert scenes. It taxied along the Wendover runways, a bus engine powering its wheels. It was in the film, and it played a central role, but it wasn’t the star. Instead it was a prop; part of the scenery. Very much like the abandoned airbase itself.


But still, it is pretty cool. 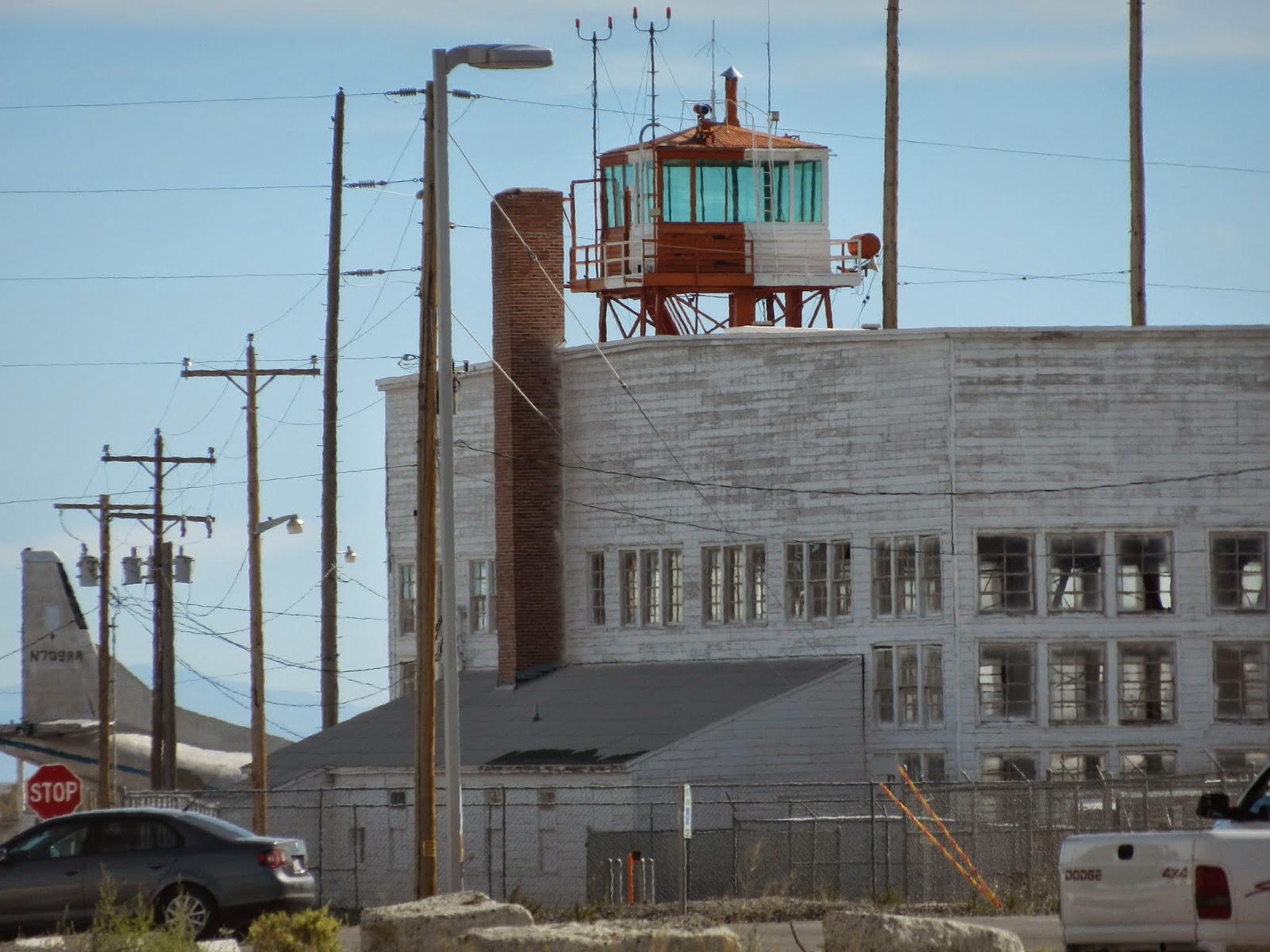 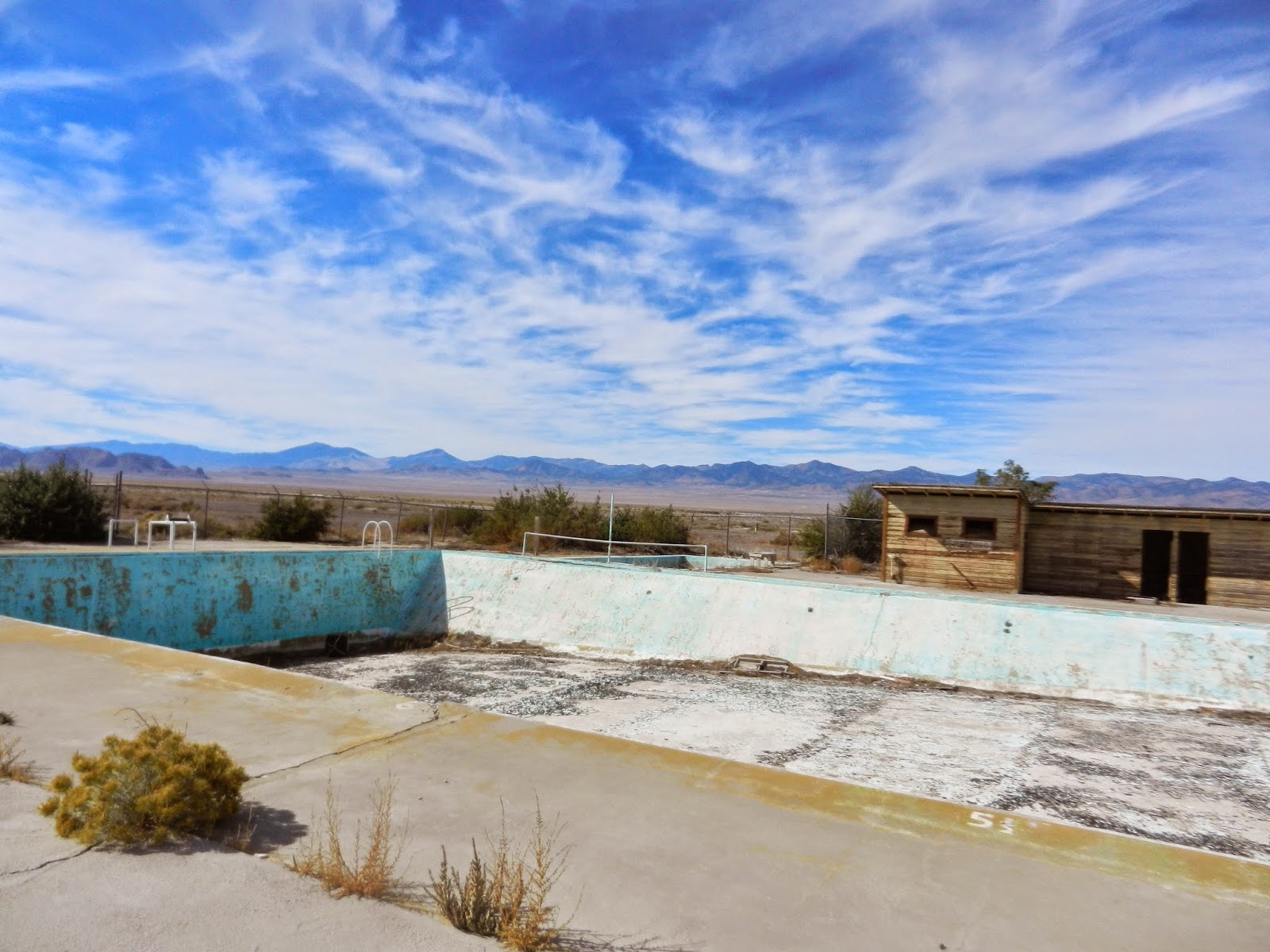 Posted by Ben Boulden at 6:15 PM No comments:

Email ThisBlogThis!Share to TwitterShare to FacebookShare to Pinterest
Labels: Meanderings

"Dying in the Post-War World" by Max Allan Collins 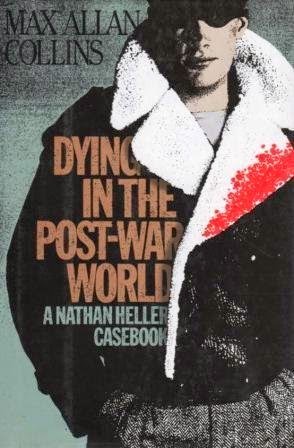 Max Allan Collins has been writing about his hardboiled former Chicago cop turned private dick Nathan Heller for 30 years, which translates into 15 novels and four short story collections. Nate first appeared in True Detective (1983) and most recently in Ask Not (2013). In 1991 the first collection of Nathan Heller stories appeared, and its title story—the best in the collection—was a Shamus nominated novella titled “Dying in the Post-War World”.

“Dying in the Post-War World” is set in Chicago. July, 1947. Heller’s wife, Peg, is pregnant, and while business at his A-1 Detective Agency is slow—no one is getting divorced in the post war euphoria—life isn’t bad. That is until Bob Keenan, a high level administrator at the Office of Price Administration (OPA), calls with an emergency, and Peg tells Nate she wants a divorce. In that order, and just that quickly.

The emergency. Bob Keenan’s six year old daughter JoAnn was kidnapped from her room. The window open. A broken down ladder outside, and a note on the floor of the girl’s room:

“Dying in the Post-War World” is an intriguing retelling of Chicago’s Lipstick Killer. The names have changed—William Heirens (the real world convicted Lipstick Killer) is now Jerome Lapps, and Suzanne Degnan (the kidnapped girl) is now JoAnn Keegan. Mr Collins also plays with the timeline, and adds an appealing mob connection in form of one Sam Flood (aka Sam Giancana). The details are interesting, but the magic is in the telling. The smooth integration of fact and fiction. The old world Chicago. A Chicago where it was both possible to buy, and people actually wanted, a brand new Plymouth. The humor—“crooked even by Chicago standards.”

The story is written in first person. It is something of a nostalgic memoir. It is hardboiled, lean, and tough as the Windy City. It also has a bunch of post war angst. The sort of angst we all feel; a little hope and a lot of fear for the future. Not necessarily our own future, but the future we leave our children—

“For that one night, settled into a hard hospital chair, in the glow of my brand-new little family, I allowed myself to believe that that hope was not a vain one. That anything was possible in this glorious post-war world.”


But the most powerful effect of the story? Doubt. Doubt about the killer. The future, and ourselves. And even a touch of shame; at what we do, how we do it, and worse, how we rationalize it.


Purchase a copy of Triple Play, which features the novella “Dying in the Post-War World” from Amazon.
Posted by Ben Boulden at 3:20 PM 1 comment:

The Decoy is a paperback original published by Gold Medal in 1951. It is as by “Edward Ronns,” a pseudonym of Edward S. Aarons who is best known for his “Assignment” novels. The cover art is beautifully soft—the dark shades of the background contrast nicely with the soft, bright colors of the fallen, or falling angel. The artist: Baryé Phillips. 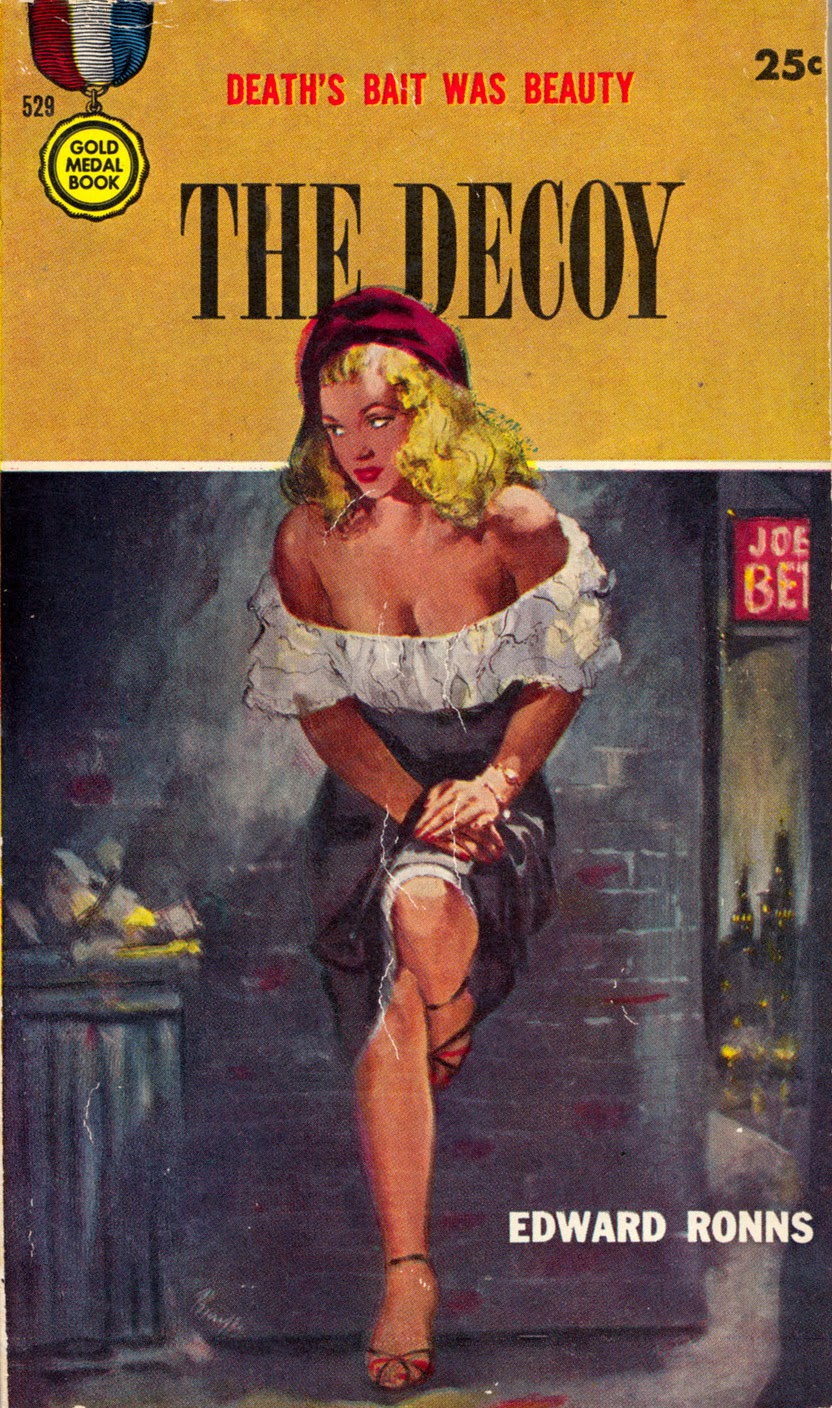 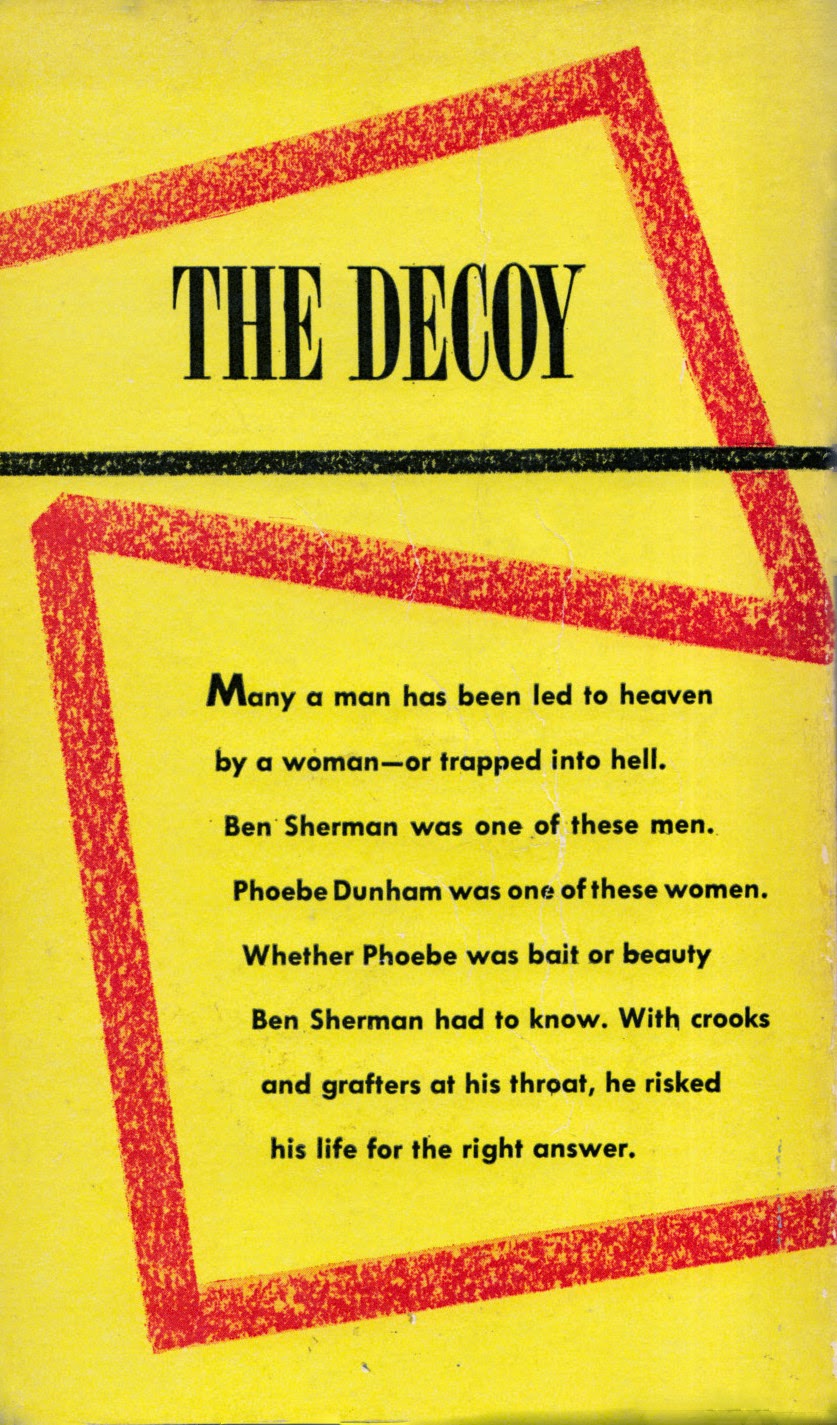 “Ben Sherman awoke with a sense of unfamiliarity to place and time. The night was cool. He could hear the peepers in the fresh-water swamp nearby, their chirrupings a brave but trembling herald to spring. He missed the sound of the ocean’s surf. In the deeper stillness that spread under the cries of the peepers, he could hear someone breathing in the darkness, someone other than himself. He became conscious of Angie’s soft warm thigh pressed against his.”

Mr Aarons wrote somewhere around 30 novels as by “Edward Ronns”. The majority of his novels, including his “Assignment” novels, were published by Gold Medal.

This is the ninth in a series of posts featuring the cover art and miscellany of books I find at thrift stores and used bookshops. It is reserved for books I purchase as much for the cover art as the story or author.
Posted by Ben Boulden at 11:38 AM No comments:

THE DRAGON MAN by Garry Disher 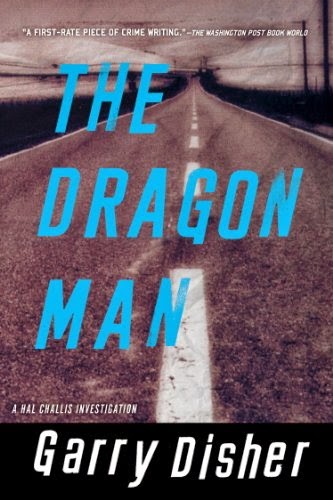 The Peninsula is “a comma of land hooking into the sea southeast of Melbourne” in Victoria, Australia. It is a tourist destination known for its beaches, wineries, and coastal towns. It is sparsely populated, beautiful, and, recently, the stalking ground for a sex killer. One woman was found dead on the Old Peninsula Highway—a lonely road treading the western coast of the peninsula, cutting south and west—and another has disappeared.

Inspector Hal Challis, the regional homicide specialist, is assigned the investigation. The search is headquartered in the fictional city of Waterloo. A city with a small police force, and an even smaller CIB—Criminal Investigation Branch—squad. The killer is careful and clean. The only significant lead is the track of a rare brand of tire near the dumping site of a victim—

The Dragon Man is a beautifully written police procedural. The main plot is supplemented with crisscrossing subplots. An overzealous constable. A series of house burglaries. A frightened woman trading sex for drugs. And Hal Challis. An almost broken, flawed man. A man who is married to a woman who, along with her lover, attempted to kill him. A man who is underestimated by most, and a man who is likable, and, at times, real.

The setting is rendered with care, and the small details—a bucket in the shower to catch the water for additional use in the garden, dry draught-like conditions of mid-summer heat, herons feasting on mosquitoes—create a real world believable place. A place that is familiar and exotic. Mr Disher also plays with morality. The police often behave more consistently with the criminals they chase. One steals evidence from the police locker. Another attempts to blackmail a woman for sex during a traffic stop.

The Dragon Man is the real deal. It is the first novel (of six, so far) featuring Hal Challis. It is something of a cross between literature and police procedural. It is rich on detail, economical, meaningful, and a wonderfully entertaining novel.
Posted by Ben Boulden at 11:42 AM No comments: 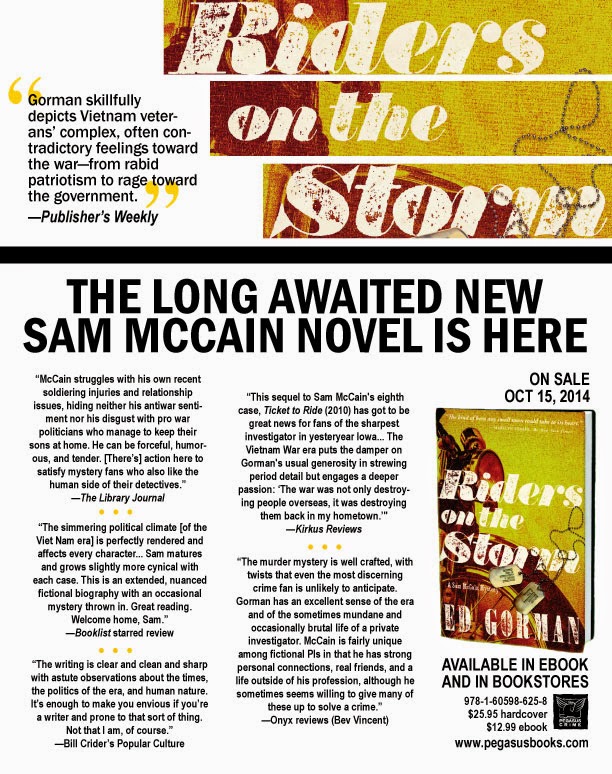 Posted by Ben Boulden at 8:50 AM No comments:

THE WAY YOU DIE TONIGHT by Robert J. Randisi 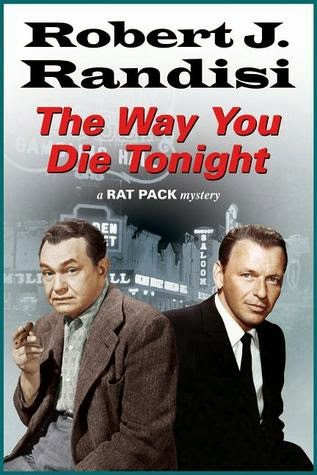 The Way You Die Tonight is the ninth Rat Pack mystery featuring smooth operator and Sands’ pit boss Eddie Gianelli. This time Eddie G. has more action than he can track. Edward G. Robinson (the other Eddie G.) is in town, preparing for his Lancey Howard role in The Cincinnati Kid. Howard Hughes is on his case for dope on the Vegas scene, and Jack Entratter’s—manager of the Sands Casino—girl (read secretary) is found hanging from a pipe in a casino restroom. The cops—lead by the incompetent and highly frustrated Detective Hargrove—are calling it suicide, but Eddie G. sees only murder.

It seems everybody wants something from Eddie G.—

“‘You’re the man everyone comes to when they need something in Vegas.’”

—and fortunately there is enough to go around. Eddie enlists the help of Danny Bardini, a childhood friend turned private eye, and Jerry Epstein, formerly known as the torpedo and current mob enforcer from Brooklyn, to help solve the murder. Eddie G. (really Mr Randisi’s execution) expertly shuffles between the murder and the “other Eddie G.” and Howard Hughes subplots—subplots that provide gentle nostalgia and smile inducing humor.

The Way You Die Tonight is as smooth as anything in print. It is heavy on dialogue, larger than life, and fun as hell. The Vegas that was is vividly described. The casinos: The Sands, The Desert Inn, Binion’s Horseshoe. The atmosphere: jittery, exciting, exotic. I was reminded of an especially good episode of the old Robert Urich television series Vega$. The open skies, faded mountains, wide streets, and hip celebrity sinsters.

In a word: Fantastic!
Posted by Ben Boulden at 1:32 PM No comments: