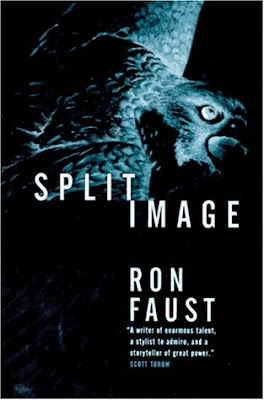 Split Image is best read cold, and this review is loaded with spoilers. Read ahead at your own peril and rest assured it is fantastic. But if you insist…
“It occurred to me—and this was my first conscious thought upon ‘awakening’—that the crows did not object to the carnage. Of course not. They were scavengers and were impatiently waiting their opportunity. Even so, I could not entirely dispel the notion that they were judging me—small black magistrates, feathery clerics.”
The idea is Andrew Neville’s; a failed playwright, three early critical successes and nothing since, making his living as an editor of a corporate newsletter. On a whim he travels to the woods of northern Wisconsin to the primitive hunting cabin of a friend. It is autumn, and deer are in season. He takes an old bow and its matching arrows from the cabin. He doesn’t expect a kill, but when a buck cuts his trail a lusty greed overtakes him. The deer is wounded, and while tracking it Andrew comes to a man cleaning a buck.
Andrew believes the deer is his, but the man calmly and reasonably claims it. The two have a cold exchange of words; at the end Andrew kills the other. He doesn’t remember the actual killing, but Andrew knows he did. He cleans up the cabin, disposes of the clothing and other evidence and returns to Chicago. A few days later he learns the man’s identity, and realizes, for the first time, he once knew the man. They were in the same theater company, and while Andrew failed as a writer his victim found significant success in Hollywood.
Andrew, after meeting his victim’s widow at the funeral, calculatingly insinuates himself into the dead man’s life. He moves into the boat house on his wooded estate, wears his clothes, befriends his only child, and smoothly woos his wife. The only hold up is a despicable man named Roland Scheiss—
“‘Scheiss means ‘shit’ in German, doesn’t it?’”
—hired by the murdered man’s parents to prove his widow, and by extension, Andrew Neville killed him. Scheiss is loathsome. He is filthy, crude, and corrupt. His game is blackmail, and he begins calling Andrew at odd moments of the night threatening, cajoling, taunting. Andrew remains calm, but his sanity begins to unravel; he converses with his victim in the dark hours, and small meaningless events begin to weigh heavily, and finally his narrative turns suspect; is the tale truly as it is being told, or is the reader being deceived?
Split Image is a fine novel. It is dark, riveting, and curious. It is as much literature as commercial. It weaves an enticing mixture of Edgar Allan Poe—think “The Tell-Tale Heart”—Alfred Hitchcock, and a 1950’s Gold Medal novel. Andrew Neville is a cold, almost empty narrator, who is as interesting, and enigmatic as any character in popular literature. The prose is sparse, poetic and meaningful. It is also satisfying, thought-provoking, and damn good.
Split Image is Ron Faust’s tenth published novel. It was published in 1997 by Forge as a hardcover. It is currently available as a trade paperback and ebook from Turner Publishing.
Posted by Ben Boulden at 6:00 AM 1 comment:

The Warsaw Document, by Adam Hall, was published as a hardcover by William Heineman Ltd in 1971, but the edition that caught my eye was the paperback edition published by Fontana in 1978. The cover is cold war perfect with a Mercedes—the choice of every good spy—running a barricade. The artist: Tony Roberts 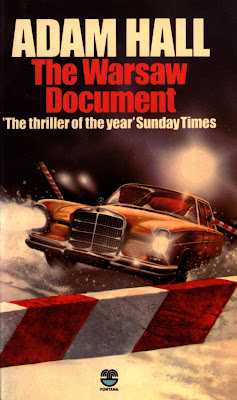 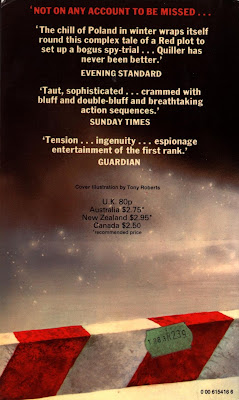 The first paragraph:
There would be no warning, I knew that.
The Warsaw Document, is the fourth (of 19) novels featuring British spy Quiller. The Quiller books were published as by Adam Hall, which was a pseudonym for Elleston Trevor.
Posted by Ben Boulden at 6:00 AM 1 comment:

JIMI AFTER DARK by Stephen Mertz 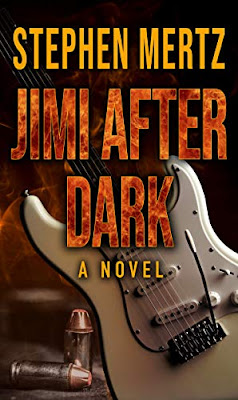 Jimi After Dark is the second novel in what I think of as Stephen Mertz’s musical mystery series, which isn’t an accurate moniker since the books are as much about the time and place of the tales’ setting as they are about the music and musicians. The first, Hank & Muddy (2011), was set in the 1950s and featured Hank Williams and Muddy Waters. Jimi After Dark is a 1960s novel set in 1970 London, near the end of Jimi Hendrix’s too-short life. Its genesis, as Mr. Mertz explains in his Afterword, is Jimi’s mostly disbelieved kidnapping claim by armed thugs and his ultimate rescue by other armed men.
From the start, Jimi is in trouble, legal trouble with his former manager Mike Jeffrey and another, more violent, trouble with more than one unknown source that may, or may not be related to the Kray Brothers—the East End crime syndicate brothers in prison when the story begins—and the Central Intelligence Agency. Jimi calls on his old Army buddy, unnamed in the story and simply called Soldier, for help. Soldier is fresh from his second tour in Vietnam with a tendency towards violence and a strong sense of duty and loyalty, which acts as an effective literary foil for Jimi’s hippie and gangster filled world.
Jimi After Dark is an action crime novel with nicely executed action scenes, a few twists, and big ideas: friendship, loyalty, betrayal—the unexpected betrayal of friends and lovers and the more expected betrayal from governments—duty, honor, and the relationship between music and culture. The 1960’s culture war is dissected, Jimi on one side and Soldier on the other, wrapped inside a well-told, exciting story with the cleanest, strongest prose in the business. Jimi After Dark is Stephen Mertz’s best novel, and it should be on everyone’s reading list.

COME OUT TONIGHT by Richard Laymon 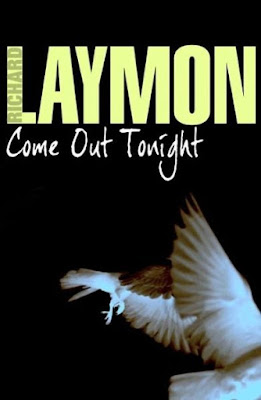 Richard Laymon is a legend in the horror genre. His work is brutal, violent and, at times, almost pornographic. His novel Come Out Tonight is no exception. It is the story of Sherry Gates and her scrape with a demented underage serial killer.
The novel opens with Sherry sending her boyfriend, Duane, to a local convenience store for condoms. When he doesn’t return she gets nervous and goes out looking for him. She finds Duane’s van, but she doesn’t find him. This sparks an all-night search, a chance meeting with a helpful older man and an encounter with two charmingly innocent teenage boys. And, somewhere in between, she is kidnapped, beaten, and raped. The plot takes a number of surprising turns. And in the end, it becomes difficult to tell the good guys from the bad.
Come Out Tonight opens with a bang. The prose is quick and sharp. The story is interesting and the characters are fun, even if a little familiar to anyone who has read Richard Laymon’s work. It is dialogue rich, and a very quick read. Unfortunately, like many of Laymon’s novels, it lacks a certain amount of believability. It is difficult to ignore the glaring fact that all of this pain, fear and horror could be escaped by simply picking up the telephone and dialing three numbers: 9-1-1.
While the characters motives are suspect, and not adequately explained, this is still a fun novel. The reader just has to ignore the obvious holes in the plot, and the fact that Laymon’s characters never make the right decision. They always run down the wrong corridor, or choose the wrong road, or alley. They are innocent, or ignorant, of their true situations, and they always think they can handle it. They never, when it is available, ask for help. And, of course, their actions always lead them into deeper, darker and more frightening places.
Fortunately, it isn’t very difficult to ignore the novel’s weaknesses. Richard Laymon can weave a damn good story and make you want to ignore the blemishes. He does it with a sturdy understanding of the tale and its impact on the audience. He tightens the suspense like a noose around the reader’s neck. He makes you want to believe the tale. It is very much like a campfire story. You know it is not real, and could never be real, but somehow it still enthralls and even scares you.
The action is violent and stuffed with sex—most of the novel is filled with sexual torture, but somehow, as written by Laymon it is less disturbing and nasty than it could be; perhaps because it is seemingly written through the eyes of a thirteen year-old boy. It is more fantasy than reality. And that fantasy is somehow innocent and almost coy.
Come Out Tonight is not for everyone. If you are offended by violence, sex, or just about anything else, avoid this book. If, on the other hand, you like a little heady action and quick-shot violence you just might like this offering. Be careful and don’t take it too seriously, or we all may have to question both our sensibilities and our sanity.
Posted by Ben Boulden at 10:15 AM 1 comment: