Recalled to Life was serialized in the June and August, 1958 issues of Infinity Science Fiction. The edition that caught my eye is the mass market published by Lancer Focus in 1967. The dominantly orange high tech machinery below a solid white background is marvelously dated. The artist: Unknown (to me at least). 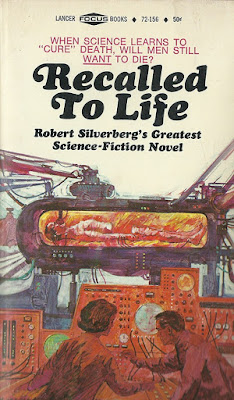 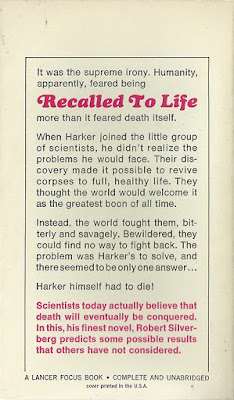 The opening paragraph:
“That morning James Harker was not expecting anything unusual to happen. He had painstakingly taught himself, these six months since election, not to expect anything. He had returned to private law practice, and the  Governorship and all such things were now bright memories, growing dimmer each month.”
Posted by Ben Boulden at 6:05 PM 1 comment: 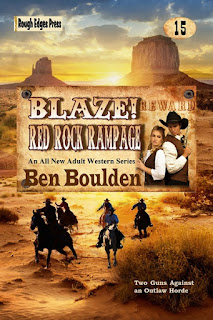 Western Fiction Review reviews Blaze! Red Rock Rampage in a very nice way. Steve Myall, editor of WFR, is an expert on series Western fiction and his review means a great deal to me. A few of my favorite parts:


“This is Ben Boulden’s first entry into this multi-authored series and what a terrific addition it is. Filled with action from the word go the author weaves a twisting plot that sees both J.D. and Kate facing many deadly situations.”
“Ben Boulden’s descriptive writing puts you right there in the thick of the action and his characterization of both good and bad is very well drawn, enabling you to share their emotions.”
“…this fast moving tale that ought to please all fans of westerns.”
You can read the entire review at Western Fiction Review.

If you read RRR, let send me an email and let me know what you think. 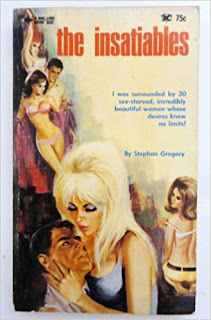 I read this essay about five early Don Pendleton novels, featuring Stewart Mann rather than Mack Bolan, written by DP devotee, all-around great human, and terrific writer Stephen Mertz a few years ago. Steve was kind enough to allow me to reprint it here. The books are difficult to find, and maybe even harder is trying to filch a decent cover scan or two. And if you find these books, take pity and send a few to me.

I was in need of some light reading, and so just finished one of Don’s earliest books, a Stewart Mann, private eye novel called The Hot One (1966), written as by Stephan Gregory.

It was a hoot and if you haven’t yet sampled the Mann series (there were five books), you owe yourself a glance at another side of Don that he rarely (understandably) revealed in the Bolan novels: he was one funny dude.  I’ll always remember his warm Arkansas chuckle.  The Mann novels are cast in the Shell Scott/Carter Brown style of sexy, breezy, funny, hard-hitting short mysteries that were popular in the 1950s and 60s.  In fact, The Hot One totally holds its own in the Prather level of ribald detective fun.

This isn’t the voice Don used in his Joe Copp private eye books, by which time he’d firmly carved his own distinctive writing style, but is that of an enthusiastic young writer stretching his muscles for the main event (Bolan is three years away, remember).  But there is foreshadowing of the big guy to come.  Towards the end of this book, Mann has his moment of despair and considers bailing when he has a chance, but Don has him reflect, “Bug out, Mann, bug out.  And I started to.  But I knew I’d spend the rest of my life feeling like a whipped pup.  I did care about the people involved.”

But about the humor: as this is a “sexy” 1966 paperback, most of the funny stuff are witty asides about this gal or that; my favorite is when Stew and a chick are trapped and it looks for sure like they’re gonna die, but when she sees Mann, she starts touching up her face.  Don writes, “I watched idly, marveling at that creature called woman.  At the gates of hell a woman would ask Lucifer for a comb and lipstick.”  The plot is the purest hokum, seat-of-the-pants plotting with holes big enough to drive the War Wagon through…and I loved every word. 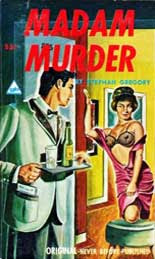 A few caveats are in order if this series sounds interesting enough to you to go on-line in search of it.  The ones to start with are The Insatiables and Madam Murder, which were published exactly as Don wrote them.  The Hot One and The Sexy Saints were “spiced up” with about 10 pages of graphic sex (written by the editor) scattered throughout each book.  Don was a romantic writer and these passages are easy to spot in their crudeness (and easy to skip over).  More problematic is Don’s wonderful naming of Mann’s self-destructive sex impulse: ol’ creature.  Just when everything is going hunky-dory for Mann, on a case or with life in general, ol’ creature stirs.  Stew got booted from the Marines for doing a General’s daughter.  Kicked off the cops for doing the captain’s wife.  It’s a great literary device.  Well, in Saints and Hot One, ol’ creature becomes ol’ baldy.  Which I think is hilarious.  Whenever the subject came up in conversation, Don invariably repeated the new name, rolled his eyes and there was that soft Arkansas chuckle again.

The only Mann to avoid is The Sex Goddess, which is incomprehensible through no fault of Don’s.  The book was over the word-length so the editor arbitrarily deleted three consecutive chapters from the middle of the book.  Yowza.

Upon finishing The Hot One, I found myself leafing through my correspondence with Don from when I was just a writer-in-the-making—a year from my first professional sale, two years from my first book sale.  I had initially written Don a straight up fan letter, and waited awhile before letting on that I nurtured dreams of a writing career.  In a letter to me dated 24 March 1974, Don wrote:
“I could have guessed that you too are a writer.  Keep at it.  Nobody ever said it was easy—and I’ll let you in on another little truth.  The more “successful” you get, the harder “it” gets.  I used to knock out those Stephan Gregory books in 5 or 6 days and never feel a pain.  Now I pace the floor and sweat blood to get 8 or 10 pages a day.  But it’s all worth it, so hell keep at it.”

Thanks, Don—for Stewart Mann, and for the advice.

Bullet Reviews: A smattering of praise 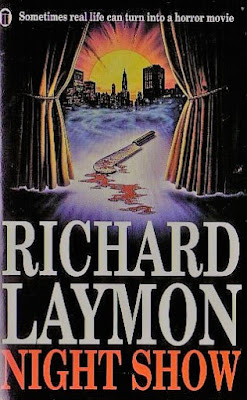 You may have noticed already (or not) that I’ve been struggling with posting new reviews on the blog recently. This is due to myriad reasons, none are of interest to anyone other than me (but check out my short story review column in Mystery Scene Magazine and my new book Blaze! Red Rock Rampage). So, to keep things moving I thought I would post a few small reviews, to the point with no fluff, written for places like Amazon, Goodreads, etc. Each review runs short—anywhere from 40 to 150 words—but I hope everything needed for an appropriate review are still there.

An early Richard Laymon novel, Night Show, has all the elements that make his work special. Likable, if poor decision making, characters, cinematic plotting, smooth prose, and a mixture of subtle humor and horror. The setting, backstage B-movie horror special effects, is a bonus, too.

The Dead Man: Face of Evil by Lee Goldberg and William Rabkin

The first entry in The Dead Man series, Face of Evil, is entertaining, odd (in a good way) and downright fun. Matt Cahill, a normal working class guy, finds himself in a very abnormal situation. Dead, but still breathing with a nemesis called Mr. Dark. It is an enjoyable mixture of action, suspense and horror. Humor and a tongue-in-cheek quality add marvelously to this very readable story. A terrific start to the series and I very much look forward to the other books.

The Dead Man: The Blood Mesa by James Reasoner

The Blood Mesa, the fifth installment of The Dead Man series, is an entertaining, non-stop action horror novel. Matt Cahill, The Dead Man, is in the Four Corners area of New Mexico at an Archaeological dig where Mr. Dark’s intentions are plain. Everyone must die. A smooth, action-oriented horror novel, high on entertainment. A fast, enjoyable and downright fun read. It reminded me a touch of Richard Laymon’s excellent horror novels, particularly One Rainy Night.

The Dead Man: Carnival of Death by Bill Crider

Bill Crider’s Carnival of Death, the ninth book in The Dead Man series, is as much fun as a reader can have with paper and ink. Matt Cahill, The Dead Man, is working security for a carnival when the evil entity Mr. Dark begins playing games and the carnival goers start behaving in violent and disturbing ways. And it is up to Matt and his trusty ax to save the day. A carnival setting is similar to eating cotton candy without any of the less savory side effects (headaches, toothaches, grouchiness), and this story never faltered in its delivery. Action-oriented horror with splatter, a fortune telling love interest and (did I already say this?) a terrific setting.

Tales from the Otherverse, edited by James Reasoner

Tales from the Otherverse is an entertaining and surprising anthology of alternate history stories. Bill Crider’s story “It Doesn’t Matter Anymore” deservedly won a Sidewise Award for best alternate history short story. A world where Buddy Holly didn’t die in an Iowa plane crash and Elvis dumped Colonel Tom Parker as his manager turns out far differently than I would have suspected. “The Hero of Deadwood” by anthology editor James Reasoner is a clever retelling of Wild Bill Hickock’s story with a single moment changing the entire tale. The exchange of seats at a Deadwood poker game, keeping Hickock’s back against the wall.

There is also a fine Stan Wade story from John Hegenberger and seven other entertaining tales from excellent writers like, Scott A. Cupp, Lou Antonelli, Cheryl Pierson, Keith West, Robert E. Vardeman, Scott D. Parker, and Richard Prosch. An anthology very much worth the price of admission.