Me, Hood!, by Mickey Spillane, is a paperback original published by Signet Books in 1969, which is the very the edition that caught my eye. The simplicity of the background, the large text, and the McGinnis painting are eye-catching. The artist: Robert McGinnis 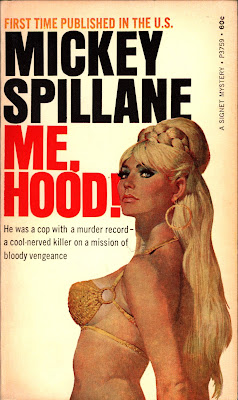 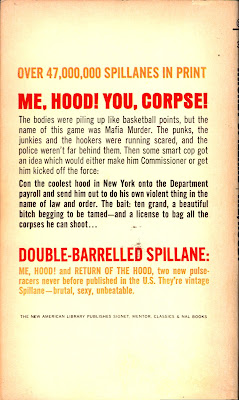 
They picked me up in a bar on Second Avenue and waited for the supper crowd to flow out before they made their tap, two tall smiling lads with late model narrow-brim Kellys that helped them blend into the background of young junior executives.

Posted by Ben Boulden at 7:15 AM No comments: 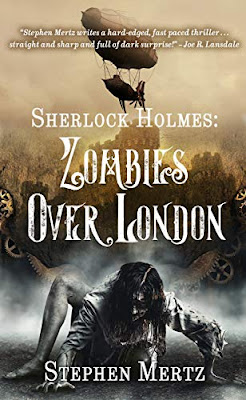 I have always wanted to hear Sherlock Holmes say—

—but I didn’t know it until I read those words in Stephen Mertz’s Sherlock Holmes: Zombies Over London. It features, as the title suggests, Arthur Conan Doyle’s timeless detective Sherlock Holmes. It is, as are the bulk of Conan Doyle’s original stories, narrated by Dr. John Watson and the narration is close to perfect – the cadence, noun and verb selection, characterization, and setting very much capture the feel and time of the original stories.

It opens with a punch. Holmes and Watson are inflight aboard the futuristic military dirigible Blackhawk, approaching Castle Moriarty to rescue Watson’s wife, Mary Morstan, from the clutches of Professor Moriarty. Moriarty kidnapped Mary as a form of extortion to keep Holmes and Watson from investigating his most recent criminal endeavor. An enterprise Holmes knows nothing about, except Moriarty’s plan to auction off its results, whatever it is, to the highest bidder. The two men jump from the dirigible, a “flight enabler” – very much like a hang glider – strapped to their backs, landing safely on the roof of the castle. Once on the castle they notice a group of empty-eyed workers loading wagons in a precise, rigid manner; to Watson’s confusion, and incredulity, Holmes labels the workers as zombies. And Moriarty, always the master criminal, has more than zombies in his plans.

Sherlock Holmes: Zombies Over London is a hybrid adventure and detective novel. Its mystery is genuinely interesting. It features more than one nicely turned sub-plot, which effectively adds texture and confusion to the primary mystery without cheating. Its cast is unique and includes H. G. Wells and a teenage Albert Einstein. There are several scenes that display Mr. Mertz’s keen ability to develop action in a sparse, believable manner without losing the voice and tone of a Sherlock Holmes story. It is an impressive display of storytelling. It captures the essence of Conan Doyle’s stories while being wholly original, and it is a showcase of Mr. Mertz’s range as both storyteller and writer. And, it is damn fun.

Posted by Ben Boulden at 4:30 PM No comments:

I’ve been pushing my own stuff too frequently the past few weeks, both here and at Gravetapping’s Facebook page, but—and please forgive me—I wanted to tell you about a couple non-fiction pieces that are available out in the big bad world. 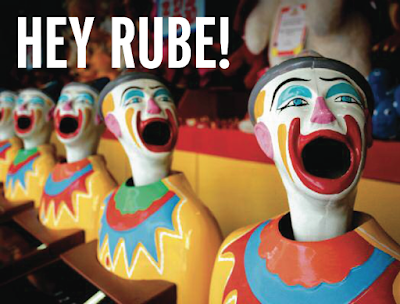 The first is a feature article I wrote for Mystery Scene Magazine—it even made the cover!—about mysteries with a circus or carnival as a central element. A subgenre that has long intrigued me for the simple reason that I love the illusion and mystery of traveling amusements. The article, titled “Hey Rube! The Mystery is at the Circus”, is far from an in-depth study of this type of mystery since I limit my scope to four novels: Slow Dollar, by Margaret Maron; Catch a Falling Clown, by Stuart Kaminsky; Blood and Circuses, by Kerry Greenwood; and The Death of Anton, by Alan Melville.


“Hey Rube!” is available in the print magazine and on MS’s website (for free)

The second is a half-dozen reviews I wrote for adventure novels that have been included in the fanzine, Men of Violence, in its all reviews edition. It’s an attractive paperback with more than 100 reviews and 90 pages. My entries are: Sad Wind from the Sea, by Jack Higgins, Wrath of the Lion, by Jack Higgins, East of Desolation, by Jack Higgins, The Guns of Navarone, by Alistair MacLean, Terror’s Cradle, by Duncan Kyle, and High Stand, by Hammond Innes. The other reviews included in this issue look even more intriguing (maybe because I didn't write them).

Email ThisBlogThis!Share to TwitterShare to FacebookShare to Pinterest
Labels: Men of Violence, My Stuff, Mystery Scene

Deathwatch, by Elleston Trevor, was published as a hardcover by Beaufort Books in 1985, but the edition that caught my eye was the Star Book (imprint of W. H. Allen & Co.) mass market edition. The cover says everything. The artist: unknown (to me at least) 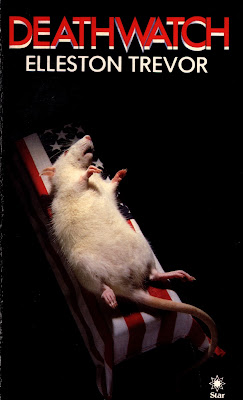 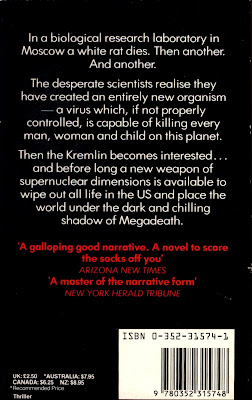 
The snow came drifting in massive silence across the Lenin Hills, blown from the north and spreading rumpled ermine over the city, torn here and there by the spikes of the church steeples and jeweled by the street lamps, with the gold domes of the Kremlin burning against the black horizon to the south.

Elleston Trevor is best remembered as the author of The Flight of the Phoenix (1964), which has been translated to film twice, and his alter ego, Adam Hall, who penned a number of significant adventure and spy stories, including the Quiller books.