HELL IS TOO CROWDED by Harry Patterson (Jack Higgins) 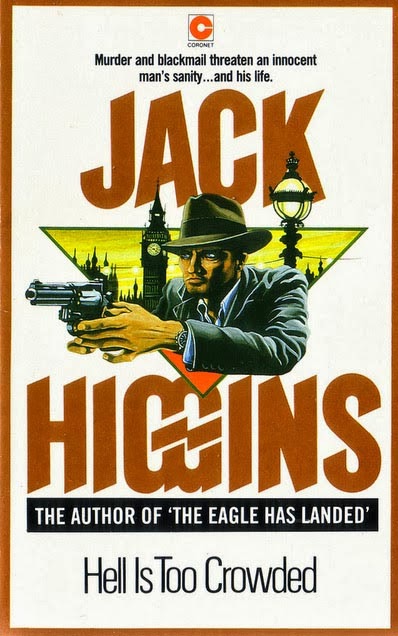 Hell is too Crowded is the fifth novel published by Harry Patterson.  It was released as a hardcover by John Long in 1962, and it is the most mature—both stylistically and thematically—of Mr Patterson’s earliest novels.

Matthew Brady is an American structural engineer who is in London after completing a job in Kuwait.  In the early morning hours Brady is on the tail end of a two day jag when a frightened young woman named Marie Duclos stumbles out of the fog.  Marie is returning home from a party, and she tells Brady a man is following her.

Brady accompanies the young woman to her Chelsea flat where everything changes.  He passed out on the couch, and his next conscious moment is the police questioning him for the murder of Marie.  The rest of the novel is Brady’s attempt to discover who framed him for the murder, and why.

Hell is too Crowded is a brilliantly plotted novel with a depth of setting and atmosphere not previously accomplished by Harry Patterson.  The storyline—at least the hook—is similar to David Goodis’ Dark Passage, but the execution is purely Jack Higgins’ adventure.  Matthew Brady is a man apart—he is completely isolated from the world around him, and the setting and atmosphere denote this isolation from the first moment.  The fog, the near emptiness of the river, and the sound of a ship’s foghorn combine to create an uneasy tension of separation, which is the underlying theme of the novel—

“A ship moved down the Pool of London sounding its foghorn like the last of the dinosaurs lumbering aimlessly through a primeval swamp, alone in a world that was already alien.”

The plotline is straightforward, but it is developed seamlessly; one scene effortlessly leads to the next, and Mr Patterson doles out clues timely, but with an unhurried pace.  The first clue is in the first paragraph, but it isn’t realized until the last pages of the novel.

Hell is too Crowded is very nearly a perfect thriller.  It is a mixture of noir and adventure, and is written in Mr Patterson’s unique, almost lyrical, prose—

“There was a taste of fog in the air, that typical London fog that drifts up from the Thames, yellow and menacing, wrapping the city in its shroud.”


There are also a few interesting slang terms in the novel, including “grass,” which basically means snitch, and “doss,” which means easy.  There is also a solid joke in the narrative—if you know Harry Patterson was a school teacher—when an homely assistant to one of the villains, a Hindu Priest named Das, is described as “a school mistress.”

Berserker Man is the third Berserker novel (and fourth book) by Fred Saberhagen.  Its debut was a fashionable paperback original by ACE in 1979, which is the exact edition that caught my eye.  The artwork is a Boris Vallejo original, and it is a perfect 1970s science fiction cover.  The colors are vivid (yet somehow muted all the same) with a stark contrast between light and dark.  And, amazingly, it is an image I can look at again and again and see something new; a flash of coral, a uranium splash, an oxidized reflection of fire. 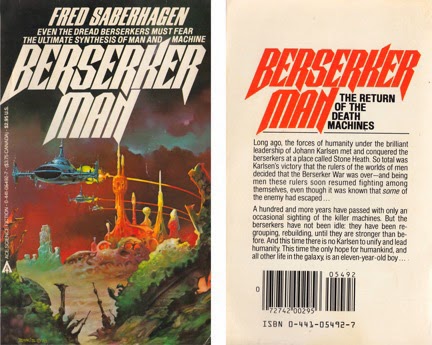 The Berserker stories have been going strong since the 1960s, and even today have a cult following.  A Berserker is a self-replicating war machine, which was design to destroy life.  The name “berserker” was borrowed from Norse legend.  It is defined (in Merriam-Webster’s Collegiate Dictionary) as—

“[A]n ancient Scandanavian warrior frenzied in battle and held to be invulnerable.”
The opening paragraph:


“Well, Elly Temesvar thought grayly, we’ve given it a good fight, done better than anyone might have expected, considering how little ship we have to fight it with.” 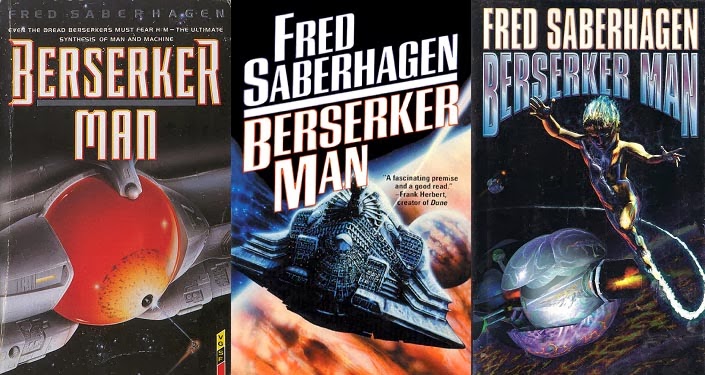 This is the second in a new series of posts featuring the cover art and miscellany of books I find at thrift stores and used bookshops.  It is reserved for books I purchased as much for the cover art as for the story or author.
Posted by Ben Boulden at 4:08 PM No comments:

THE GUNS OF NAVARONE by Alistair MacLean 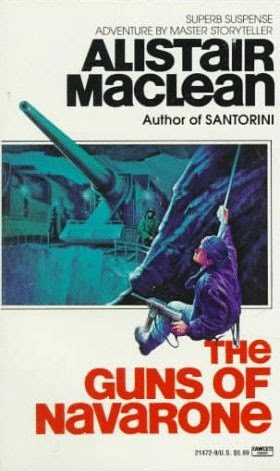 Alistair MacLean is a legend of the adventure novel.  His work, especially his first several novels, is the standard all other adventure novels are measured.  And it is a large and uncomfortable fit for nearly every novel and writer in the genre.  Much of his best work is about the daring exploits of men at war, which is interesting because Mr MacLean held antiwar viewpoints.  In an essay he wrote for Companion Book Club, which is included as an introduction to recent editions of his novel The Guns of Navarone, he stated—


“I wanted to write a war story—with the accent on the story.  Only a fool would pretend that there is anything noble or splendid about modern warfare, but there is no denying that it provides a great abundance of material for a writer, provided no attempt is made to glorify it or exploit its worst aspects.”
I have also read Mr MacLean was disappointed in the Where Eagles Dare film, which he developed as a screenplay before writing the novel.  In Chris Willis’s biographical essay for its Alistair MacLean entry in British Mystery and Thriller Writers Since 1960, Ian Chapman, MacLean’s editor at Collins, quoted Mr MacLean’s reaction to Where Eagles Dare—


“This is terrible!  I didn’t kill as many Germans as this.  I was writing an antiwar film.”
I can only imagine a wry smile, or a half chuckle when Mr MacLean said those words because as a fan of both the film and the novel I can’t possibly see the “anti” part of the war story, but it has been some years since I read the novel; maybe I missed something?


I bring all this up because I recently reread Alistair MacLean’s second novel The Guns of Navarone, and it, somehow, was better than I remembered.  Which is impressive because I remember it being pretty damn good.  Navarone is a Greek island in the Aegean Sea where the Germans built a nearly impervious artillery emplacement deep in its stone cliffs.  The Allies have made every attempt to destroy the guns because with them in place the Germans’ control the passage to the small British held island Kheros where some 1,200 soldiers are stranded.
In a last ditch effort British Intelligence creates a strike force composed of five men.  The men are tasked to infiltrate Navarone and destroy the guns before the Royal Navy attempts its rescue of the men on Kheros.  If they fail, the naval ships will be destroyed by the guns, and the soldiers on Kheros will be captured, or worse.


The Guns of Navarone is a larger than life war story painted on a small canvas; the action is limited to a single objective with extraordinarily fine plotting, and the perspective is limited to the eyes of the strike force.  The plot and action live up to the old writing adage, “Get your protagonist up a tree.  Throw rocks at him.  Then get him down.”  In this case, the tree is Navarone, and the rocks are more boulders than stones because anything that can go wrong does—from wild weather to an expectant well-trained German occupation force and a nearly impenetrable fortress of stone protecting the guns.
The action is compressed into four wildly eventful days.  The men are dispatched to Navarone on a dilapidated Greek fishing boat, which miraculously not only gets to the destination, but makes it through a heavy storm and a German patrol boat.  Once on the island it takes everything, including some luck, for the team to reach its destination.  The team is comprised of five men who, save two, have never met or worked together before the mission.  The core of the team is comprised of three men—Keith Mallory, the leader and famous mountaineer before the war, Andrea, a former Colonel in the Greek army, and Dusty Miller, a smart-aleck American who spends a great deal of his time trying to escape duty.


The characters are built for the story, but there are surprising moments of something more.  One of the men, a young mountaineer named Andy Stevens is driven by fear.  The turmoil he creates, and endures, is quite powerful.  His true fear is the men around him will know he is a coward, and he will do anything to keep his secret.  The characters, for the most part, are simple designs of superhuman composites; Andrea is a killing machine, Miller is the humorist, and Mallory is the responsible leader who thinks his way through trouble.  Interestingly, like much of Mr MacLean’s early novels, there is not a female to be found.
The Guns of Navarone was originally published in 1957 and it is as exciting and relevant today as it was when it was released.  It is a representation of the best of Alistair MacLean’s work.  The plot is tight and tricky—in a good way with both betrayal and surprise—and believable in that over the top manner MacLean was able to do so well.

It’s official.  Veronica Mars the movie is scheduled for release March 14, 2014.  It looks like it is old school as far as the cast—all the usual suspects show up in the trailer, including Mac, Dick, Logan, Keith (Dad), and Wallace.

Posted by Ben Boulden at 3:08 PM No comments: