Never Live Twice, by Dan J. Marlowe, was published as a paperback original by Fawcett Gold Medal in 1964. The edition that caught my eye is Black Lizard Press’s 1988 reprint. A disappearing sun, palm trees, a cool car, what appears to be a dead guy, and a woman in distress, or perhaps a femme fatale, grabs with a promise and a curse. The artist: Kirwan 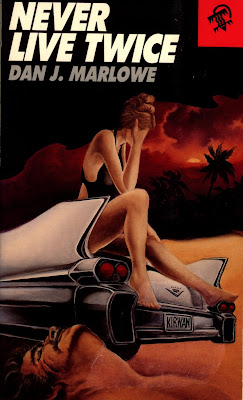 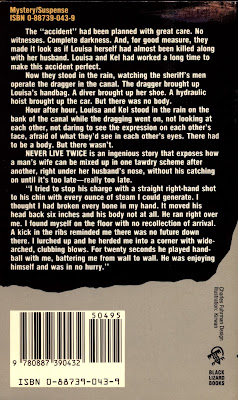 
The white Cadillac rolled up the curving pebbled driveway, passed the brightly lighted clubhouse, and went around to the parking lot in the rear of the country club. The car’s windows were up and its airconditioning purred quietly against the humidity of the south Florida night. Low clouds drifted across the face of a quarter moon, and a few drops of rain fell on the windshield. The Cadillac came to a stop with its headlights beamed out over a practice putting green; the driver leaned forward, cut the lights, then turned to his companion. “You sure you know what to say afterward?” he asked urgently.
Posted by Ben Boulden at 7:00 AM No comments: 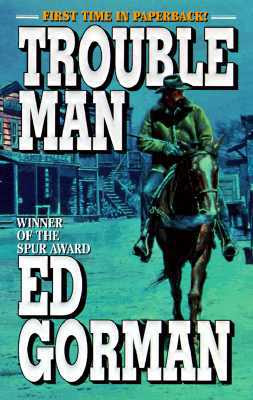 Ed Gorman’s work is reliably good. At its best it is clear, concise, meaningful, entertaining. The people he creates are melancholy with a bitter hopefulness; a hope that mostly goes unfulfilled, but a hope that is as steady and resolute as a winter storm. His stories are most often set in the towns and cities of Iowa. A place that can be as welcoming or forbidding as Mr. Gorman wants it to be. A place he knows well. A place, including its people, he understands with the clarity of a surveyor and the sorrow of a poet.

He has successfully written in many genres, mystery, crime, science fiction, horror, western. He is, on a foundational level, a crime writer. No matter the genre he is writing, and while still honoring the tropes and expectations of that genre, his stories are structured and executed with the deft plotting of the crime story. This style and story structure is especially appealing in the western genre where he has written many of his best novels. I was reminded how well his style translates itself to the western genre when I recently read his novel, Trouble Man.


Ray Coyle is a faded gunfighter. He gave up the violence for a sharpshooter job in a traveling Wild West show. When word comes that his only child, Mike, was killed in a gunfight in Coopersville he blames himself. He taught his boy the trade and now Mike’s dead. Ray travels to Coopersville to claim Mike’s body and get the details of the fight that killed him. When the town’s doctor, who doubles as undertaker, shows him the body he notices a deep gash on Mike’s forehead. His suspicions are raised further when he meets the man who killed Mike; Bob Trevor. Bob is the town bully and the son of the most powerful man in the region and, to Ray’s educated eyes, incapable of beating Mike in a fair fight. And Ray decides, no matter how much pressure the town’s Sheriff applies, he isn’t leaving Coopersville until he knows how his son was killed.


Trouble Man is a multilayered novel that is, at its core, a study of two fathers losing sons – Ray and Bob Trevor’s father, Ralph – and their struggle to deal with the loss. Ray is a sad, regretful man, and Ralph is, on the self he projects to outsiders at least, the opposite. Ray blames himself for his son’s demise and Ralph has protected Bob from the consequences of his bad behavior for decades. The story, deftly and without being overbearing, is a character study of these two men, but it is also a well-plotted, entertaining genre vehicle.

It begins in violence and ends the same way. The story transforms more than just the primary protagonist, Ray, and it effectively communicates the turmoil of the human experience. But it does this without devolving into despair and, as the story ends, a bright anticipation of a better future is revealed. In a phrase, it is classic Ed Gorman and its appeal should be wide as both entertainment and the depth of humanity – both good and bad – it displays.