I have a new hobby. It's not much, but it keeps me sane when I'm stuck at my desk all day. I have a window, but man if I don't miss the open air, the road, and just plain being outside. So each day I dial into Google Maps--hit the Satellite button--and go for a drive. I usually pick a road, a city, a state, an island, a Mountain, anything and take bird's eye view. It stops the shuddering, the twitching, and everything else for a few minutes.

And sometimes I see some pretty cool stuff. Like this image of a piston engine airplane flying across the vastness of Lake Mead in Nevada. If you look closely you can see the propellers whirring, and if you use just a little imagination it almost looks like a ghost plane. The kind of thing you would see on an old episode of The Twilight Zone. And that shadow on the lake's surface; is it for real? Way too cool. 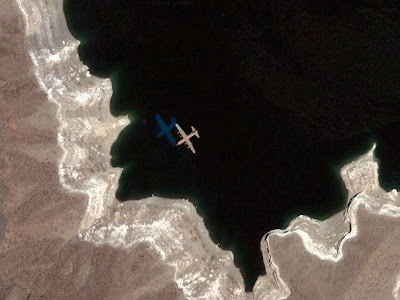 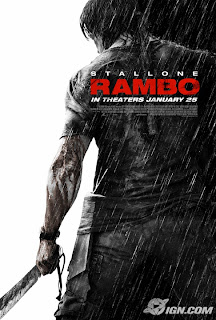 I read something interesting over at David Morrell’s website: he likes the new film Rambo based on the character from his novel First Blood. He thinks the film is the most faithful adaptation of the John Rambo character, and that Sylvester Stallone does a terrific job portraying the broken, self-loathing man Morrell imagined when he created the character for his 1972 novel. He says, in part:

This is the first time that the tone of my novel First Blood has been used in any of the movies. It's spot-on in terms of how I imagined the character—angry, burned-out, and filled with self-disgust because Rambo hates what he is and yet knows it's the only thing he does well.

I’ve been a little suspicious of the film for a few reasons—the trailer looks extremely violent (although pretty good to my action-junkie eyes), it’s release date was pushed back at least once, and the producers exiled David Morrell from the production. You may remember a post I did last summer about Morrell’s isolation from the film, and his frustration about it. So his kind words carry some weight in my mind for the simple reason that he didn’t have a thing to do with anything. I doubt he ever spoke to the director, screenwriter, or anybody with anything to do with the film. And I’m glad it passes the author test—if he likes, I bet I will. And this is a film that I would really like to enjoy.

A Note: First Blood is a novel you should read—assuming you haven’t—because it absolutely rocks. This one turned the action thriller on its head, and its themes of war, violence and death are as relevant today as they were when it was written. And it’s entertaining as hell.