Mark Coggins is a crime novelist who writes mysteries because “of [his] admiration for the work of Raymond Chandler.” His novel, The Immortal Game, the first to feature hardboiled private eye August Riordan, was selected as a top ten crime novel of the year by both the San Francisco Chronicle and Detroit Free Press. There have been five additional August Riordan novels published, and the most recent, No Hard Feelings, is available now.

“This third outing for Coggins’s private investigator August Riordan proves him a worthy successor to the iconic Sam Spade…[A] volume that fits comfortably alongside those of Hammett and Chandler. Highly recommended.”  —Library Journal on Candy from Strangers

The August Riordan novels are below—if you click the title you will be transported to each book’s Amazon page—with the publisher’s brief description and the first paragraph from each novel. 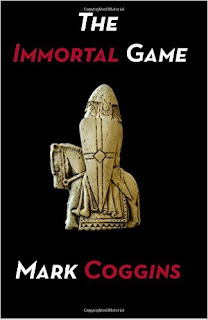 Publisher’s description: When the world's most innovative computer chess software is stolen, wisecracking, jazz bass-playing PI August Riordan is hired to find it.

Sifting through a San Francisco peopled with bruising, ex-NFL henchmen, transvestite techno geeks, and alluring, drug-addicted dominatrices, Riordan has got his work cut out for him.
But with a smart-ass attitude like Riordan's, nothing is easy ...

First paragraph: The left front tire of my battered Ford Galaxie jolted into a pothole, and the last of my factory hubcaps popped off and went rolling down the slope behind me. I slowed the car to a stop and watched in the rear view mirror as the hubcap hit the shoulder of the road and bounced into the brush below. I had planned to use the hubcap with my silver tea service as a crumpet tray, but I could see now those plans were kaput. 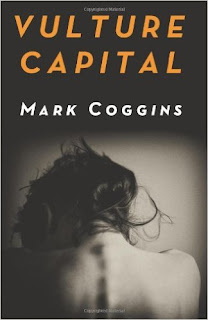 Publisher’s description: When venture capitalist Ted Valmont is belatedly informed that the Chief Scientist of NeuroStimix--a biotech firm in which he has invested--is missing, it's not just business, it's personal. Not only is the scientist an old school chum, but his disappearance jeopardizes the development of NeuroStimix's most important product: a device intended to aid spinal cord injury victims. Since Valmont's twin brother, Tim, was paralyzed in a college diving accident, finding the scientist and getting him back into harness is of the utmost importance to both brothers.

Valmont engages August Riordan to assist in the search and the men soon discover that the disappearance is part of a larger conspiracy to use NeuroStimix technology for perverse applications. And when a beautiful, mysterious young woman comes onto the scene, it's impossible to say whether the technology will provide the ultimate means to save them all or be the catalyst for tortuous, self-inflicted deaths…

First paragraph: KTVC was the station. Amelia Crenshaw was the reporter. Her producer, cameraman and the station van were arrayed along the narrow shoulder of Highway 280 while Amelia, microphone in hand, did a stand-up with the exit sign for Sand Hill Road looming behind her. 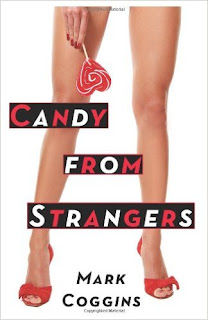 Publisher’s description:  Caroline Stockwell has a secret: she and her best friend Monica are “cam girls.”

Soliciting cash donations and gifts via Amazon.com wish lists from anonymous admirers, the young women have put up a web site featuring still photographs, video and blogs to help pay their way through art college. But when Caroline goes missing and her mother Ellen engages jazz bass-playing PI August Riordan to find her, Riordan discovers her secret and it appears to everyone that someone she met through the web site is responsible for her disappearance.

Set against the real-world backdrop of Internet predators using social networking sites like Facebook to find and ensnare their victims, Candy from Strangers is the first novel to explore the phenomenon of teenagers and young adults displaying themselves online in exchange for material favors—often without their parents' knowledge—which some are calling the newest form of prostitution.

First paragraph: When Henry Glover wrote It Ain’t the Meat (It’s the Motion) in 1952 for the King Records R&B group The Swallows, I’m sure he never anticipated the trouble it would cause. The Swallows had made a modest hit of the song, but the risqué lyrics and the fact that white kids weren’t buying many records from black groups limited its play. It took Chris Duckworth belting it half-century later to really do some damage. 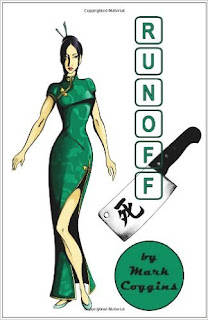 Publisher’s description: August Riordan—private investigator, jazz bass player, smart ass with a foolish heart—is going to find out. He's been hired by Leonora Lee, the all-powerful “Dragon Lady” of San Francisco's Chinatown, to investigate the results of the city's recent mayoral election. It seems the Dragon Lady's candidate failed to even carry the Chinese precincts, and she's convinced that someone must have rigged the outcome by hacking the city's newly installed touch-screen voting machines.

A runoff between the two remaining candidates is days away, but it takes Riordan mere hours to find the Director of Elections dead in his office. A visit to the offices of Columbia Voting Systems—the suppliers of the city's touch-screen machines—results in another corpse. A wide range of political interests share a stake in the election, so Riordan's got plenty of suspects.

First paragraph: I shouldn’t have been surprised when the backhoe materialized out of the Chinatown fog, ran onto the sidewalk and took out a column supporting the pagoda roof of the Bank of Canton. But I was. 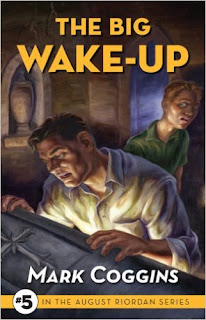 Publisher’s description: The odyssey of María Eva Duarte de Perón—the Argentine first lady made famous in the play and the movie Evita—was as remarkable in death as it was in life. A few years after she succumbed to cervical cancer, her specially preserved body was taken by the military dictatorship that succeeded her deposed husband Juan. Hidden for sixteen years in Italy in a crypt under a false name, she was eventually exhumed and returned to Buenos Aires to be buried in an underground tomb said to be secure enough to withstand a nuclear attack.

When San Francisco private eye August Riordan engages in a flirtation with a beautiful university student from Buenos Aires, he witnesses her death in a tragic shooting and is drawn into mad hunt for Evita's remains. He needs all of his wits, his network of friends and associates, and an unexpected legacy from the dead father he has never known to help him survive the deadly intrigue between powerful Argentine movers and shakers, ex-military men, and a mysterious woman named Isis who is expert in ancient techniques of mummification.

First paragraph: ‘Are you hoping for a souvenir or checking to see if they’re your size?’ 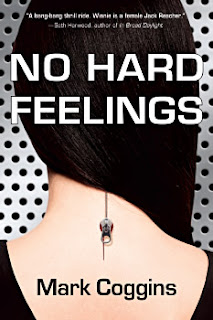 Publisher’s description:  Winnie doesn’t remember the last time she felt anything below her neck. Her spine is severed at the seventh vertebrae, but thanks to implants from a sabotaged biomedical start-up, she has regained mobility. She is a prototype: a living, breathing—walking—demonstration of revolutionary technology that never made it to market.

Her disability has become her armor. Because she doesn’t register fatigue, she has trained relentlessly. Her hand, arm, and leg strength are off the scales for a woman, and she has honed self-defense techniques to channel that strength. She’s a modern-day Amazon who feels no pain.

When the sociopath who torpedoed the start-up sends killers to harvest the implants from her body, Winnie must team up with broken-down private investigator August Riordan to save both their lives—and derail sinister plans for perverse military applications of the technology.


First paragraph: When she got to San Francisco and found that August Riordan wasn’t there, she decided to kill herself. She took a cab from downtown to the Presidio and walked out on the Golden Gate Bridge. She went past the historical marker placed by the Native Sons of the Golden West, past the section of the walkway bordered by a chain-link fence, and onto the part where the only barrier between pedestrians and a two-hundred-fifty-foot drop was a chest-high railing.
Posted by Ben Boulden at 8:45 AM

Thanks for the introduction to Coggins. I had not heard of him, but am intrigued. I like your format here, pairing the publisher's pitch with the first paragraph of each novel.

Matt, thank you for the kind words. It seemed, to me at least, that nearly everything I was writing for Gravetapping was for older, mostly out-of-print books, and I wanted to try and get some newer titles online. So I came up with the Publicity Push post, and so far it has really been fairly successful.

As for Coggins, his work has really received some very nice reviews from the trade magazines--PW, Booklist, etc.