Tidbits: The Haunted, by Robert Curran (the movie, too) 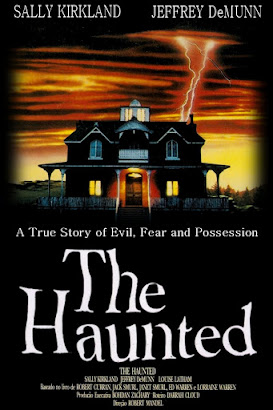 In 1988 a blandly designed hardcover—black type on a white background with a thumbnail image of a creepy house at the center—was published by St. Martin’s Press. Its title, The Haunted, by Robert Curran, Jack & Janet Smurl, Ed & Loraine Warren. The name “Robert Curran” was a disguise for crime writer Ed Gorman (his job was as a ghost writer). Like much of the Warrens’ work it was labeled nonfiction, but there are those who doubt the veracity of the Warrens’ paranormal stories.

The Haunted is about a malignant haunting of Jack and Janet Smurl:

“Jack and Janet Smurl and their family have been victims of abuse - both mental and physical - by inhuman entities that threaten their sanity, and even their lives. Over several years, the Smurls together with numerous other people - neighbors, police, priests, researchers - have witnessed scores of supernatural events at the family house: the ripping out of ceiling fixtures, the levitation and beating of the family dog, Janet’s strangling by unseen hands, the repeated appearance of a black hooded figure - and more. And they can’t escape - the demon even follows them when they leave their house.” (from the dust jacket)

According to Ed, in the months before he died in October 2016, the book “was ridiculous, but it made a good TV movie.” The movie was aired on Fox in the Spring of 1991 (in my memory), and Ed’s analysis of the film is pretty much right. The movie is creepy, scary, and entertaining as heck. The starring roles are filled by Sally Kirkland and Jeffrey DeMunn.

To quote Ed, “Don't waste your time on the book.” But the movie is worth its ninety minute run time. Here’s a link to a fairly low quality print of the movie at YouTube: