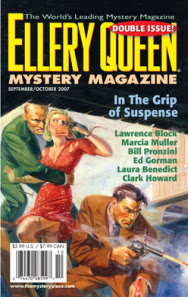 Jason, Spence, and Bill are in their early-twenties working dead-end jobs—they work at a locally owned video store, and after closing each night they fall back to Bill’s apartment with cheap beer and campy DVDs. They share the dream of escaping their boring Midwest lives to the excitement and glamour of Hollywood. The three know that if they could ever get the courage, they could make it big as directors.

Everything changes for the boys when one evening a woman who looks strikingly like the Hollywood actress Michele Danforth—the scream queen a few years back who disappeared from Hollywood without a whisper—walks into their video store. The boys quickly formulate a plan to discover if the woman is Michele Danforth, and it doesn’t take them long to go too far, and their actions reveal a seamy and dark underside that will betray not only their friendship, but very nearly their lives.

“Scream Queen” is a nifty little thriller of a short story—it is less mystery, and more dark suspense, but no matter where it is categorized, it is both entertaining and thought provoking. It is entertaining in that it kept me guessing until the very end, the characters felt real, and the atmosphere was perfect—it was dark and heavy without being morose and depressing. It also tackled a few deeply felt human emotions like sex, friendship, betrayal, and even perception. But mostly, it was a lot of fun, and very much worth the price of admission.

“Scream Queen” is in the current issue of Ellery Queen Mystery Magazine (September / October 2007), and it can also be found in the anthology Midnight Premiere, published by Cemetery Dance and edited by Tom Piccirilli.
Posted by Ben Boulden at 3:35 PM