FOOLS RUSH IN by Ed Gorman 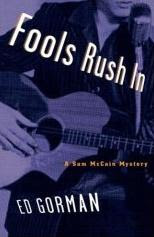 It was the winter of 2002 that I discovered Ed Gorman’s Sam McCain series—I found a copy of Will You Still Love Me Tomorrow?, the third novel in the series, at Borders one afternoon. I read it, loved it, and quickly went on an expedition to find the first two novels in the series. Since then there have been four additional Sam McCain novels and one novella. I’ve read each of them at least once, and I just read the most recent addition to the series: Fools Rush In.

It’s 1963. The civil rights movement is charging across the country. The townspeople of Black River Falls, Iowa are concerned about the tumultuous changes that are happening across the country, but their town has been insulated from the turmoil until a young black man is murdered. His name is David Leeds, and he is a motivated, attractive, and well-liked young man who is attending University in Cedar Rapids, and scandalously dating the daughter of a local Senator.

Sam is again heralded into action by Judge Whitney—the last of the gentrified Whitney family who came to Black River Falls in the 1860s after a disagreement with the Treasury department sent them running from the East coast. He is ordered to find out who killed David Leeds and stop Cliff Sykes, the incompetent local Sheriff, from fouling the investigation. Sam quickly finds himself in a mystery that goes beyond mere racism—he does discover plenty of hate, but he also finds corruption, blackmail, fear, and even a little love.

Fools Rush In is darker than the previous entries in the series. We find Sam in a new world—the beautiful Pamela Forrest is gone, Mary has returned to her husband and Sam feels himself getting a little older. His father is ill and his world is changing. He is still a wiseacre, philosopher, pulp reader, part-time lawyer, and part-time private eye, but the world is changing around him. Or maybe better said, he is losing his youth and his vision of the world is changing.

The mystery is top-notch. Mr. Gorman gives enough false leads to keep the reader guessing at what is happening, and when the climax arrived I was surprised by who did what, and why. I enjoyed Fools Rush In a whole lot. It is a worthy addition to one of the better private eye series still being produced, and I hope—oh how I hope!—there is another story or two still waiting to see print. But if there isn’t, Fools Rush In isn’t a bad title to go out with.
Posted by Ben Boulden at 9:32 AM