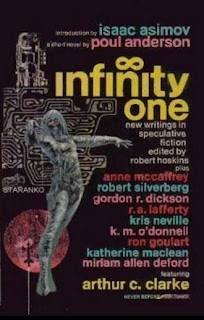 I found an old science fiction anthology at a thrift store a few weeks ago. It is titled Infinity One and it advertises itself as “a magazine of speculative fiction in book form.” It is a mass market published by Lancer in 1970. It has 18 stories, sixteen appear to be originals, and the story—or its author at any rate—that caught my attention was a nifty short titled “Nightmare Gang” by Dean R. Koontz.

The editorial introduction for Mr Koontz is also of note (to me at least)—“Dean R. Koontz is another of the younger generation of science fiction writers.”—because I have never lived (at least as a reader) in an era when Dean Koontz was considered anything but a veteran bestseller. But here, in this anthology, Koontz’s name doesn’t even make an appearance on the cover—front or back. How times change.

“Nightmare Gang” is something approaching dark fantasy. It is a motorcycle gang story with a dark twist told in first person narrative. It opens with a knife fight between the gang leader and a member who would like to be leader. It doesn’t last long, and the leadership hierarchy is left unchanged. The leader, a man simply called Louis—there are no last names—uses the fight as an “object lesson” to scare the other gang members into line.

Louis has other advantages over the bikers besides physical strength. He is the only one who knows who each of the members are; none of them have memories of anything before the gang. Their timeline begins and ends with their gang initiation. There have been members who wanted out, but strange and unexplainable (if not terrifying) things happened to stop them.

“Nightmare Gang” was an unexpected find. It is early Koontz, but it is really damn good. It is written in a simple and almost stark style. The cadence of language is crisp and tight. It is written more like a hardboiled suspense story than science fiction—

“Cottery was a knife man. He carried six of them laid flat and invisible against his lean body, and with these half dozen confidence boosters giving him adequate courage, he challenged Louis to a fight, for he envisioned himself as leader of the gang. It was over inside of two minutes. Louis moved faster than he had a right to.”

The plot is well conceived and it is capped with a perfect ending. Mr Koontz gives very little away, and gives it a twist and nudge at the end. I think he may even have winked. I do know I smiled. I also know I enjoyed the story a whole lot. It also made me wish for a more complete volume of Dean Koontz’s short stories. His Strange Highways collection is a start, but it isn’t nearly enough.