"The View" by Brian Garfield 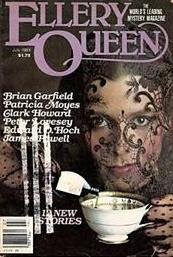 I found an older issue of Ellery Queen Mystery Magazine over the holiday weekend—July 1983—that contained a Brian Garfield story. It cost a princely two dollars; it didn’t take long to both purchase it and devour the Garfield story. Not long enough at all since the short stories of Brian Garfield are more difficult to find than one would think.


The story is titled “The View” and it is a California story—land developers, Hollywood actors, and deep muscle massage professionals. There is also a murder, a touch of adultery, a terrific view, and a condominium builder who wants to take it—the view—away.

Christopher works as a massage therapist, but his true ambition is as a screenwriter. He has several clients on a mountaintop overlooking the Los Angeles basin, and as the story opens he is at the front door of former film star Tom X. Todhunter—an 84 year-old veteran of both silent films and talkies. The old man doesn’t answer and when Christopher tries the knob it opens and he finds Todhunter looking forlornly out the large picture window at the back of his house.

It seems that his neighbor, also a client of Christopher’s, has purchased the surrounding properties with the intention to build a large condominium complex that will completely block Tom’s view. And he is less than excited about the prospect. He tells Tom that they need to stop it from happening, but damn if he knows how….

“The View” is pure fun. It is less mystery and more suspense. It is expertly plotted and written, just as one would expect from Mr Garfield, but there is also a touch of humor and poetic justice. The prose is understated and the story moves with a quick and light pace—it is made for reading, and it reads with a pleasant and expert smoothness. The characters are surprisingly well defined in short space, and the story is perfect for a lazy bedtime read.

“The View” is a professional and competent story and it begs the question; Why isn’t there a Brian Garfield collection available on the market. He is one of the defining writers of both suspense and western fiction from his generation and both his short work, and for the most part, his novels are largely forgotten. If anyone is listening, I will be the first in line to buy a Brian Garfield collection when it is published.
Posted by Ben Boulden at 6:55 PM

Mattel. Yeah. CHECKPOINT has the Charlie Dark stories. The problem is I'm greedy. I want even more.