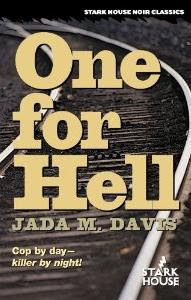 Stark House Press released a reprint of a 1952 Fawcett Red Seal original titled One for Hell written by Jada M. Davis back in 2010.  Davis is a writer I wasn’t familiar with and after reading it, I really don’t know why.  It is terrific and one of the best hardboiled noir tales I’ve read.  It resembles the work of two pulp writers, W. L. Heath—particularly Violent Saturday—and Jim Thompson.  It has the violence and dark shadows of Thompson and the sociology of secrets that Heath did so well.

Willa Ree is a drifter and a petty criminal.  The novel opens with Ree riding the rails toward a small Texas boomtown. His plan is simple: fleece the town and move on.  What happens is beyond Ree’s expectations and the town looks better to him by the minute.

One for Hell is pure entertainment.  There isn’t a protagonist.  The supporting cast, Willa Ree is the main player, come and go like visitors to an amusement park.  One by one they ratchet the pressure on Ree until he is ready to break.  And one by one Ree pushes them aside until he no longer has the ability.


The plot is tight and woven with a sophistication of character, morality and corruption.  The town has secrets—everyone has something to hide and Ree uses this underlying human weakness to his advantage.  He culls his enemies, the weaker ones first, from the herd and eliminates them. He has a girlfriend who is an arch-type, flawed at that, of woman.  She has all the strengths and the weaknesses and most are both—a desire to trust, to love and believe.  She is the light of the story and the hope.
The action is developed with a solidity and audacity that separates this novel from so many others of its type.  There is a scene in the middle part of the novel that covers 18 pages that changed my view of what can be done with both violence and action in a prose story.  It rolled like a freight train in the dark hard night.  It changed Ree from a smalltime hoodlum to a big time psychopath. It was the crux of the story, the beginning of the end for Willa Ree, and the push that leads the reader into his twisted mind.

There really isn’t anything flat in One for Hell.  Everything works.  From the plot to the characters to the psychology to the prose and it wraps itself together without the reader really knowing that it is happening.  Willa Ree spends much of his time trying to guess the actions and motives of other people and the internal dialogue is simple and interesting:

“Maybe the old woman knew. Or maybe she found it, though not likely. Baldy wasn’t a trusting sort of person, and she wouldn’t have guessed he had money in the first place. He sat on the trunk and surveyed the room. Pictures? Too simple.”

One for Hell is proof that Stark House is one of the best publishers of classic crime fiction.  This, like all of its releases, is still fresh and vibrant all these years later and it is going to be on my bookshelf for a very long time.
Posted by Ben Boulden at 6:03 AM