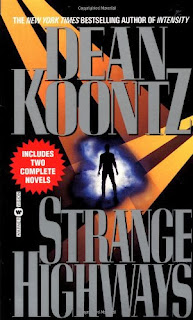 I am a longtime fan of Dean Koontz’s writing.  I enjoy all of Mr Koontz’s work, but I have a particular fondness for the work he produced in the 1970s and 80s.  I love his big genre mixing thrillers like Lightning, Cold Fire, and Twilight Eyes and more recently I have gained an appreciation for his earlier straight suspense novels like Shattered, After the Last Race, and Dragonfly.

I recently reread a short suspense novel written as by K. R. Dwyer titled Chase.  Benjamin Chase is a used up Vietnam veteran who received the Medal of Honor for an act he wants to forget.  He lives alone in an attic apartment.  He drinks to drown out the voices of the dead, and he wants to be left alone to grieve and regret.  His world tumbles into chaos when he saves a young woman from murder, and the would-be killer—a man who calls himself “Judge”—begins calling Ben on the telephone.

Chase is a dark and disturbing novel.  It was written in the Vietnam-era and is infused with hard cynicism.  Chase is simple.  He is alone, guilty, and ashamed.  His isolation is perpetuated by the near hero worship, and simple minded patriotism, of the townsfolk.  He has judged himself as less than, but as Judge pursues his verdict against Chase, he is forced to face both himself and his demons.

Chase is all story, which is to say plot with a snatch of something close to meaning.  It is short and sleek.  It takes only a few pages to move from the opening scene banquet to the action.  That is not to say it is plotted from action scene to action scene because it isn’t; there is a legitimate mystery, and the psychology of the protagonist is interesting in itself, and the slow escalation of isolation between Chase and the police, and Chase and society creates a tension all its own.  The prose is crisp and with a touch of melancholy—


“Maybe it was better to be without a woman than to die and leave behind one who grieved so briefly as this.”
It opens as a straight forward suspense novel—how will Chase save himself from Judge—to something approaching a vigilante novel.  The climax is both surprising and horrifying; even disturbing.  Its suddenness and violence surprised as much on my second reading as it did the first.  Chase isn’t one of Dean Koontz’s big novels, and it may not appeal to most of his current readership, but it a fine example of high velocity classic suspense.  But that ending is a killer.

Chase was originally published by Random House in hardcover in 1972.  It was reissued in Mr Koontz’s collection Strange Highways in 1995.  The reissued version was touched up before its release, but what was changed, other than the addition of a brief opening chapter setting the time and place of the story, I’m not sure. 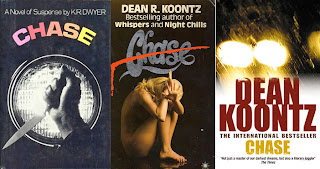 Agree 100%. Fine fine novel. Thanks for bringing it back to the public eye.

Ben, I have heard good things about Dean Koontz's fiction and a reading of his novels is long overdue.

Being an author is a lonely job and pets are a source of joy in my life. I am ready with a romance boxed set for Christmas. I am getting a few reviews from https://usabookreviewers.com/christmas-gift for my 3 book set and will also line up Bookbub promotion along with a few other sites. Last Christmas was great for sales and I am hoping for better sales this time..