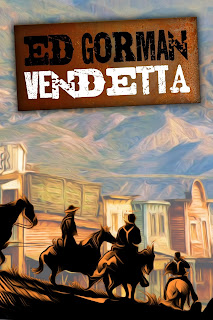 Ed Gorman wrote no fewer than 10 western novels for Berkley between 1999 and 2006.  The Berkley titles are among Mr Gorman’s best western novels, and, like all of his westerns, each is as much a mystery as a western.  I recently read his novel Vendetta, which was originally published by Berkley in 2002 and recently released as an ebook by Rough Edges Press.


Vendetta is an off kilter revenge novel; off kilter because it moves in unusual and unexpected ways (i. e. it isn’t necessarily a gun down and it is character rather than action driven).  Joan Grieves’ father, Noah, is killed in a Dryden, Colorado bank by a man named Tom Rattigan.  Noah Grieves was a wash out; he failed at ranching and mining, and when Rattigan offered him a job he took it.  Unfortunately the paycheck came with a frame for embezzlement, and when Noah is released from prison he wants his pound of flesh.
Noah’s death is the beginning, but the story is more about Joan Grieves—her journey for revenge—her surrogate parent Father Pete Madsen (who is the closest thing to a protagonist the story has), Tom Rattigan, Dryden’s police chief Walter Petty and Walter’s wife Caroline.  In the end, the story is more about betrayal than revenge and it is difficult to separate the good from the bad.


Vendetta is a beautifully complicated novel hiding in the skin of simplicity.  The surface story—a father and then daughter seeking revenge—is simple, but the details, the unravelling of a town’s secrets and the exposure of the characters’ strengths and, more often, weaknesses is complicated and insightful.  None of the characters are wholly bad, and none are wholly good.  As an example one of the “bad” characters has a daughter with a port-wine stain birth mark on her face, and the love and sympathy he displays for his child is remarkable.
The fun of the story is the revelation of who actually is the antagonist; basically the most miserable deceitful bastard in town (and it is something of a surprise when he is revealed).  It is a race to the worst, but the characters’ motives are never dark and murky and are always explained and believable.  This isn’t to say it is a dark story, but instead it is a story about human weakness, and more importantly redemption.

There is also an interesting piece of vintage slang in the novel.  A madam refers to an abortionist as a “female physician”—“She run up against a female physician who didn’t know what the hell she was doin’ is what’s wrong with her.”  I researched the term, and discovered it was widely used in the 19th Century to describe female abortionists with no formal training.


Purchase a copy of Vendetta at Amazon.

This review originally went live December 28, 2013, but since I’ve been busier than normal over the past few weeks and struggling to keep the blog rolling, and Vendetta is worthy of another look I decided to give this review new life.
Posted by Ben Boulden at 7:00 AM