THE LAWBRINGERS by Brian Garfield 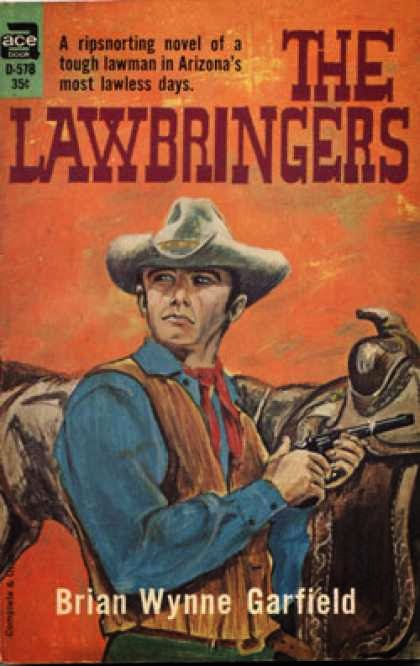 The American western novel has a bad reputation. It is reputed to be ethnocentric, violent and, even worse, simple and inaccurate. The good guys are too good, the bad guys are too bad, and the natives are one-dimensional cutouts. The townsfolk—the common working class—are portrayed as stupid, weak, or both.

In many cases this poor reputation is deserved—there have been some really, really bad westerns introduced on television, film and fiction. There have also been some damn good westerns over the years—both past and present. To quote Theodore Sturgeon—he was defending SF, but the same rule applies to westerns—“ninety percent of everything is crap.” It is the other 10 percent that separates a viable genre from a dead one and the western is far from dead, whether we are talking about golden age stories or the novels published today.

An example of an older title—it was published by one of the more maligned houses, ACE, in 1962—that holds its own against the often valid arguments against westerns is Brian Garfield’s The Lawbringers. It is a traditional western from beginning to end. It is short, seemingly simple, and very much to the point, but it is also clever, intelligent, and subtly complex.

The Lawbringers is a biographical novel about the formation of the Arizona Rangers—a law enforcement agency created by the territorial Governor to combat the seemingly endless supply of toughs and criminals that haunted Arizona in the late-nineteenth and early twentieth centuries. Its focus is directed at the chief Ranger, one Burton “Cap” Mossman, but it is told in an unexpected way. It is a multi-perspective novel that never attempts to get into the head of Mossman. Instead he is painted and defined by the characters around him—some real, others created by Garfield—as a hard, stubborn and tough man.

The novel is dedicated to Burt Mossman—“a chivalrous gentleman, a lawman, and an Arizonan.” But it is far from a one-sided novel of adoration. It tackles the man’s complexity as well as his flaws. He is depicted as a hard man doing a hard job. His decisions are made with the citizens of Arizona in mind, but with a frightening lack of color. There are no gradient shades, but rather his view is strictly black and white, and more often than not the end justified the means. He wasn’t above lynching a man to make his point, and the Mexico-Arizona border was less an end to his jurisdiction and more an artificial line to be ignored.

Mossman is a man who withstood political pressures and did what he thought best no matter the consequences. He typified the mythical western protagonist, but is portrayed by Mr Garfield as nothing more than a man—stubborn, sincere, and flawed. He had friends, enemies, and admirers, but he hid behind a wall of secrecy and loneliness. He was a man that fit into the demands of an era, but whose era passed quickly and without much fanfare.

The Lawbringers manages to does all that and also tell an exciting and tight tale. It has a peculiar heavy quality. It is packed with emotion and wonder; wonder at the basis of right and wrong. It has a conscience without being limited or judged by that conscience. It is complex and wondrous. In short, it is very much part of that 10 percent, which has allowed the western story to survive for more than a century.