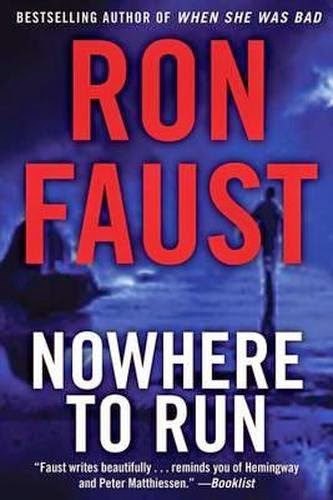 Mr Faust’s work appeared in three distinct bursts. The first, and his most productive as far as number of titles published, was between 1974 and 1981. This period saw the publication of six novels, which tended to adventure with exotic locations and solitary heroes. Lean, beautiful, descriptive prose, linear storylines, and violence.

The final novel of this early writing period is titled Nowhere to Run, and its publication in 1981 would be Mr Faust’s last for 12 years. It is also one of a few Ron Faust novels I hadn’t read, until very recently, and while it isn’t as mature and ambitious as much of Mr Faust’s later work—In the Forest of the Night, When She Was Bad, etc.—it is an excellent adventure story with a strong sense of place, character, and a beautifully nuanced awareness of humanity.

“Her eyes seemed illuminated from within. They were bright and metallic with craziness.”

Nowhere to Run is simple, or appears so at its surface. The tale is straightforward—murder, man accused, and, after much turmoil, killer exposed—but its simplicity is misleading. The story is dependent less on plot than character. The actions of the characters, and the motive for those actions, are dominant and the plot becomes a rational extension to that dominance rather than the characters a prisoner of the plot. Its language is sharp, almost poetic in its descriptive prowess, and its building blocks are human morality, psychology, and frailty. The psychology, and morality, and frailty, are summarized quite nicely in the closing pages—

“He had spent most of that evening in the lounge of the Hotel El Presidente, drinking and playing liar’s poker with a couple of his pals. They had gambled with one-hundred-peso notes and Harry had lost about forty dollars. Not much money, but enough to sour his mood a little; he had never learned how to accept losing, hated it, regarded it as a little death—every time you lost, whether a dime or an argument or what the Asians call face, a chip was taken out of your self-esteem and you entered the next contest with that much less confidence. Losing was an accumulative poison like lead or arsenic; small doses did not appear to cause much harm, but they collected and in time…”

Nowhere to Run was originally published as a paperback original Fawcett Gold Medal in 1981, and it is currently available from Turner Publishing as a trade paperback and ebook. The essay “Ron Faust: An UnforgettableWriter” provides a bibliography and a little detail about Mr Faust’s work.

Purchase a copy of Nowhere to Run at Amazon.
Posted by Ben Boulden at 3:23 PM

Ben, I did not know about Ron Faust and his novels. I like the plot of this novel. Accusing the wrong man for a crime he did not commit makes for good suspense.

Prashant. You'll like Ron Faust's work. His early stuff fits nicely in the 1970s suspense genre (even something like Jack Higgins was writing in the early part of the decade), and his later work, while still suspense, adds something of the mythic. He also wrote three PI novels in the 2000s that are excellent.

My favorite Faust novel is WHEN SHE WAS BAD.

Thank you, Ben. I'll look for his books.