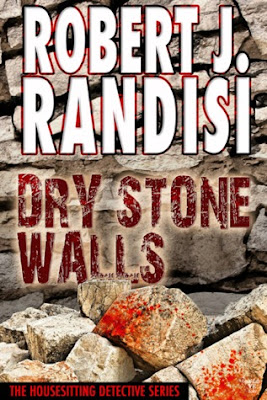 Truxton—“My parents named me after a highway sign”—Lewis is a retired NYPD Captain of Detectives. He is a young 62, and using his retirement to travel the United States by housesitting—

Tru gets free lodging, and the traveling homeowners get reassurance their house is safe. Tru is on a job in rural Kentucky when he discovers the nearly lost art of dry stone walls; rock walls with no mortar. Max Beasley, a curmudgeonly old-timer, is the only local mason who still constructs the walls. Max agrees to take Tru as apprentice, but Tru’s job description changes when he arrives at the job site and a portion of the wall has been knocked down, and even more strangely, Max is not there.

It turns out Max is in jail for the murder of a land developer whose body was found beneath the collapsed stones of the wall. Max had refused to sell his property, and the developer tried multiple methods of persuasion, including physical intimidation. Methods Max didn’t like. Tru is convinced Max is innocent of the crime, and he spends the rest of the novel proving it.

Dry Stone Walls is the first in a promising new series. It is a comfortable whodunit rich with dialogue, a likeable protagonist, small-town paranoia—of outsiders like Tru—and a cast of oddball characters; a local Sheriff who allows Max’s temporary escape from county jail, an old woman wanting to help Max get “off the hook,” without “puttin’ [herself] on it!” and a bookkeeper who is a gin rummy prodigy.

The mystery is also good. There is enough going on the keep things interesting; an FBI agent working undercover at the murdered man’s office, and the local residents’ unwillingness to give Tru an honest answer. The killer is identified earlier than expected, but a satisfying twist in the final pages keeps things interesting.