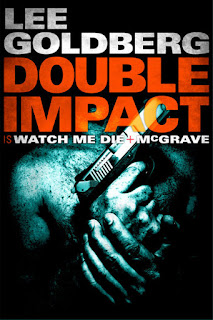 McGrave is a stylish, action-packed, and downright fun novella written by Lee Goldberg. The Afterword explains it “began as a television pilot” and the plotting, pacing and vivid cinematic prose give it an episodic television feel. A good thing in this case.
John McGrave is an LAPD detective whose knack for destruction has yielded the nifty nickname, “Tidal Wave.” After foiling the attempted robbery of a 3,000 year-old chamber pot, McGrave is fired from the force. His termination is for a culmination of events, but the final straw is a soon to be filed $20-million lawsuit by one of L.A.’s wealthiest residents. Without a job, or even any prospects for a job, McGrave takes the first flight to Berlin trailing the only would-be toilet robber to escape L.A.

McGrave is a sterling action yarn, at a perfect length, with a nicely rendered Berlin setting. The dialogue is witty, the characters fit nicely and play well together. John McGave is something like Lethal Weapons’ Detective Riggs (Mel Gibson) searching for, and finding, his Detective Murtaugh (Danny Glover) in a very unexpected locale mixed with a classic 1980s Stephen J. Cannell television series.