Thrift Shop Book Covers: "A World the Color of Salt"

A World the Color of Salt, by Noreen Ayres, was published as a hardcover by William Morrow and Company in 1992. The edition that caught my eye is the mass market paperback published by Avon in 1993. The cover illustration is a superb aerial view of a mountainous coastline that shifts into something else entirely. A cover that is both vivid and alluring. The artist: Unknown (to me at least). 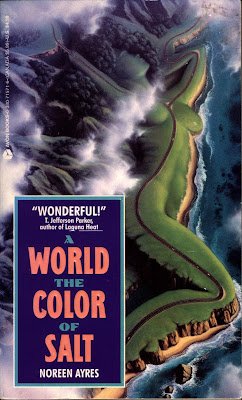 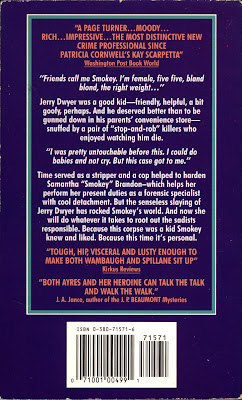 The first sentence:
First they shot him in the mouth. His tongue split down the middle like a barbecued hot dog.
A World the Color of Salt is Noreen Ayres first novel. It introduced forensic specialist Samantha “Smokey” Brandon, with “time served as a stripper and a cop,” and her hardboiled world.
Posted by Ben Boulden at 6:00 AM

I have that paperback, once read. I agree, it's a great cover.

The cover illustration on "A World the Color of Salt" was done by Jerry LoFaro. https://www.artstation.com/jerrylofaro