THE PEACEMAKER by Andrew McBride 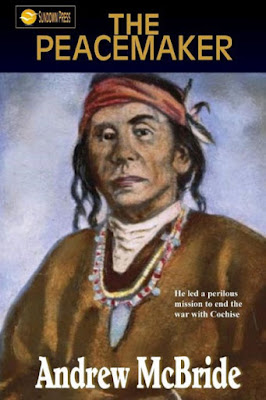 The Peacemaker is a wonderfully written, entertaining, and thought-provoking novel. Calvin Taylor, also known by his unwanted nickname Choctaw, is a teenager--six weeks past his eighteenth birthday--with experience, if not wisdom, far past his years. While moving eastward across the Arizona Territory towards Texas, Taylor is ambushed by a small group of Apache Indians.
Choctaw escapes with his life when he happens across a small U. S. Army troop escorting a white man, Brennan, and his adopted Apache daughter, Nahlin, on a peace mission from the American President, U. S. Grant, to the great Apache chief, Cochise. Against Taylor's better judgment, sweetened with the prospect of a $300 fee, he agrees to accompany Brennan and Nahlin to the Apache stronghold where Brennan will present Cochise with the peace offering.
The Peacemaker has the feel and pacing, and wonderfully so, of a classic Western film. The story, as the author explains in his Author's Note, is inspired by a 1968 screenplay written by John Starr Niendorff for the television series "High Chaparral". The desert setting has a technicolor vibrancy that captures the landscape's desolation and beauty, heat and dust. The characters, including the Apaches, are believable with recognizable strengths and flaws. Chactow is, at times less than likable, but always understandable. Beautifully written and vivid, The Peacemaker, is a big novel with big ideas that should please both traditional Western and historical readers alike.


I interviewed Andrew a few months ago, and if you’re interested you can read the interview here.

Thanks for your extremely generous review, Ben. I’m really glad you enjoyed THE PEACEMAKER, and very much appreciate you taking the time to review it.

You're welcome, Andrew. The Peacemaker really hit my reading spot when I read it a few weeks ago.