THE QUAKING WIDOW by Robert Colby 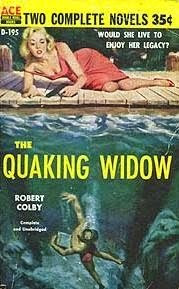 A man can get into a lot of trouble if he’s lonely. If he’s just lonely enough and has time on his hands. That’s a combination made for trouble.
Burt Keating is from New York—just outside Buffalo—where he manages a small savings and loan branch. He is in his mid-thirties with a beautiful wife and a very comfortable life. That changes when his wife leaves on an icy night for some butter, and a few blocks from their house she is crushed between a Buick and a tree. Burt can’t seem to function anymore. He sells the house, takes a leave of absence from his job and purchases a new car—
I wanted to flee to a new world and I knew that short of some South Pacific island, southern Florida was as close as you could come. After a few restless days in Miami, I took an apartment on the beach at Ft. Lauderdale some twenty miles away. It was a place called the Tropic Moon Apartments.
Unfortunately the miles and warmer clime can’t set Burt’s mind right. The only thing that has any meaning is the memory of his dead wife and the life they had, but that is over and there is nothing he can do to change it. Then he meets Alicia Shafton. A woman who seems as lost and lonely as Burt, but she has a secret. Her husband, a gambler and shyster, died and left a lockbox with a note attached. It instructed her to sell the box to a man named Ralph Emory for $200,000. The only problem: Everything goes wrong and Burt can’t help but get involved.
The Quaking Widow is the first work by Robert Colby I have read and it won’t be the last. It hit a note with me—the story, setting, characters—that many works of fiction don’t. It opened with a blast—an immediate and drastic change for a protagonist with an uncertain future—and cruised forward into ever increasing peril. The characters were the expected: sleek, beautiful, mysterious, and good and bad in varying measures.
The setting is drawn marvelously. As I read, I mourned the Florida that was. The pre-Disney World and Miami Vice Florida that was one part hillbilly and another parts chic, wealthy and dangerous. A Florida that a person can get lost in. The same Florida that was painted in the novels of John D. MacDonald with his vivid and beautiful flashes of prose.
The plotline is the expected—the dangerous and unknown femme, murder, a wildcard nympho and mysterious opponents that will stop at nothing to get the prize. In this case the box and its contents. I guessed the major plot turns before they were revealed, but it didn’t bother me because the story, while plot-driven, is textured with enough humanity to keep it more than interesting. The pacing didn't hurt either. It is perfectly developed with a well-balanced mixture of action and suspense, with a dash of romance and mystery. The prose is hardboiled and, at times, clever and rich:
She turned around and walked briskly across the room, her high, firm buttocks waving an insolent goodbye.
The Quaking Widow is worth tracking down. It is fifty-three years old, but it is more than just nostalgia. Heck, I wasn't even on the radar when it was written. Instead it is a fine example of a linear and well-told tale that is both entertaining and exciting.
It was published by ACE (D-195) in 1956, and coupled with Owen Dudley’s The Deep End, and this review was originally published all the way back in 2009.

Fine review. Colby seems to be one of the less heralded PBO practitioners of the 50s and 60s and undeservedly so, I think. He is in my "no fuss, no muss" category - straight goods delivery of the qualities you mentioned and devoid of today's seemingly obligatory political, social and identity embroidery woven into the mystery/crime novel. In Olden Times we had literature for those topics, but …