Teklords, by William Shatner, was published as a hardcover by Ace in 1991. The edition that caught my eye was Ace’s 1992 mass market edition. Its foil gold background and embossed title perfectly frame an imaginative and intriguing science fiction scene. The artist: Boris Vallajo 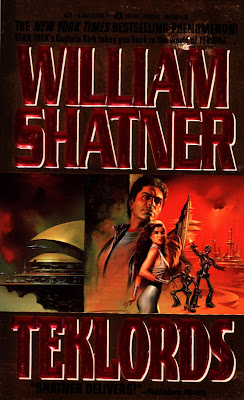 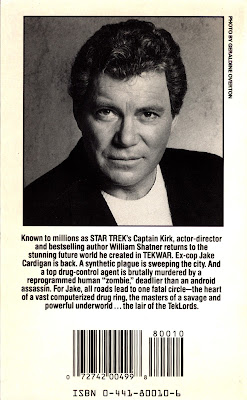 The first lines:
Friday, May 16, 2120, was grey and rainfilled across most of Greater Los Angeles.
It was not going to be an especially good day for Jake Cardigan.
There were nine Tek novels with William Shatner’s name on the cover, and each was written by the savvy and accomplished science fiction writer Ron Goulart. Teklords is the second in the series and my memory of reading it in the early-1990s is a very good one. The Tek novels were translated into a comic book series and four low-budget made for television movies and an even lower budget series.
Posted by Ben Boulden at 6:30 AM