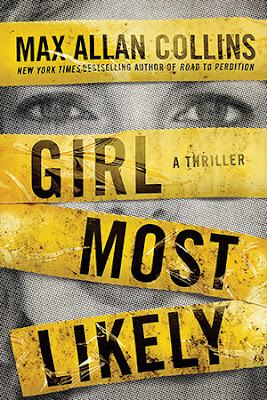 Girl Most Likely is the first in a two-book series from Max Allan Collins, featuring chief of police Krista Larson. Krista’s patch is Galena, Illinois; the small and beautiful and tourist rich birthplace of Ulysses S. Grant. Krista is a second generation police officer. Her father, Keith, was a decorated detective in nearby Dubuque, Iowa, and at 28, Krista is the youngest female police chief in the United States.
Krista is looking forward to her 10-year high school reunion in the swanky Lake View Lodge. She’s kept close contact with many of her classmates and Krista likes everyone except for the beautiful television reporter, Astrid Lund. Astra stole Krista’s boyfriend years earlier and shortly after the reunion opens, Astra is found stabbed to death. Krista calls in her father to help investigate the murder, and it doesn’t take long for a link between Astrid’s murder and the murder of another classmate, Sue Logan, to emerge. The big question is who had the motive and opportunity to kill both women?
Girl Most Likely is an enjoyable traditional-ish mystery with enough action to keep the pages turning. Ish, because it creeps close to a thriller with several scenes that feature the killer in the same way serial killer novels do. Krista is likable and intelligent. The mystery’s solution is played well, but, with the help of the scenes that feature the killer and a steady mystery reader’s nose, not surprising. But my guessing the killer’s identity before Krista and Keith was as much fun as the gossipy and snarky interplay between the former high school classmates. Girl Most Likely is an entertaining mystery that reminded me why I skipped my last high school reunion.