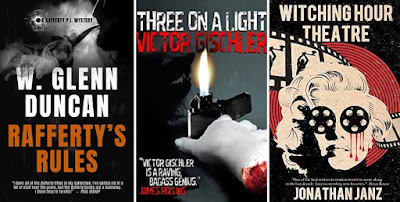 It’s bargain Friday, and this time around I’ve collected a few free ebooks for your consideration.


Rafferty ain’t in the revenge business.


So when he gets told to gun down the low-lifes who kidnapped Vivian Mollison and put her into a drug-induced twilight zone, it’s no can do.


No matter how much money Vivian’s mother is willing to throw at him.


But stirring up trouble amongst five outlaw bikers who picked on the wrong girl?

Next is Three on a Light, by Victor Gischler:

Detective Dean Murphy isn’t your normal shamus. Because of a cursed Zippo lighter, Dean finds himself taking cases involving werewolves, witches, vampires and other things that go bump in the night. A fun, pulpy mashup of the detective and dark fantasy genres. A novel of linked short stories, all of Dean Murphy’s supernatural adventures. A good selection for those who enjoyed Gischler’s VAMPIRE A GO-GO.


A NOTE FROM THE AUTHOR: Three On A Light represents my first efforts as a student in creative writing at the University of West Florida. It’s being offered to readers as an example of my early work and to tide readers over until my next novel comes out. I’d like to dedicate it to my former professors Dr. Carlos Dews and the late Laurie O'Brien.

On a cool October night at the Starlight Cinema, an all-night horror movie triple feature is about to begin: Witching Hour Theatre. It’s the one exciting thing in Larry Wilson’s life, not counting the lovely brunette who works the concession stand. Settling in, he loses himself in the atmosphere of the old place: the crowd, the screams, the popcorn and the blood.


But when the second feature ends, only thirteen moviegoers remain. Among them, a woman of nineteen with a fondness for piercings and the macabre, a cop and his wife, a trio of bad-tempered bullies, and a solitary figure sitting silently in the shadows of the back row.


On this endless October night, Witching Hour Theatre will become Larry’s worst nightmare. For the movie on the screen is growing stranger by the minute. His fellow theatergoers are disappearing one by one.


And the figure from the shadows is advancing.