MR. MONK AND THE TWO ASSISTANTS by Lee Goldberg 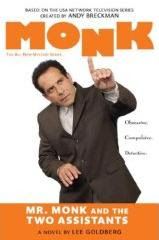 The USA Network’s series Monk is one of the most enjoyable programs on television. It chronicles the adventures of the obsessive-compulsive and very brilliant Adrian Monk. Monk is a former San Francisco police detective who lost his job, his handle on life, and very nearly his sanity when his wife Trudy was killed by a car bomb. The television series has been turned into a series of novels written by Lee Goldberg.

The fourth novel in the series, and the latest, is Mr. Monk and the Two Assistants. As the title suggests we get a visit from Monk’s former assistant Sharona Fleming, and she is a lively addition to the normal cast. When her husband is accused of murder Sharona is heartbroken, and finds herself back in San Francisco working as a nurse. She doesn’t call on Monk to solve the murder because she thinks her husband is guilty, but as luck would have it, her and Monk find each other at the hospital were she works.

Monk is instantly awestruck—when he first sees Sharona he is speechless. Then as the realization dawns on him that she is truly back, Monk offers Sharona her old job as his assistant. Needless to say this doesn’t go over well with Natalie, and the rest of the novel unwinds to reveal not one murder, but three—and Monk is at his lovable best as he tries to figure out just who killed whom, and why, without getting dirty or into too many unpleasant germs.

Mr. Monk and the Two Assistants is a humorous whodunit. It is written in the voice of Natalie, who—in this novel especially—feels very much like Sherlock Holmes’ sidekick Dr. Watson, and it is great fun to watch her struggle through the twists and turns of the plot. She is often just as lost as the reader when confronted with the powerful deductive abilities of Adrian Monk, and the wonderfully outlandish murders he solves.

Mr. Goldberg does an admirable job of portraying the characters. The novel is at its best when the entire gang is on hand—Captain Stottlemeyer, Lieutenant Disher, Monk, Natalie, and Sharona. The dialogue is pitch perfect, and the atmosphere of the television series is captured very well, except, instead of a single episode it feels like a two-part extravaganza.

An aside: Goldberg introduces a character named Ian Ludlow, who is in reality a nom de plume of none other than Lee Goldberg. In the mid-1980s Mr. Goldberg published three novels in a men’s adventure series under the name Ian Ludlow. The series: .357: Vigilante.
Posted by Ben Boulden at 4:24 PM

The review sounds nice. I’d like to read the book.

It is a fun book. It is the sort of story--as are all the Monk novels--that puts a smile on your face. Which is the main reason I enjoy not only the novels, but the television series.

Monk is my all time Favorite show.The Show is so Funny and Monk is the main character to make it Funny.I like Mr. Monk.He is immensely funny character in this Show.I was Looking to Free download monk tv show.I downloaded the Show and i got the Qualitative stuff.

Monk is really a good show to watch online. I always Watch Monk Episodes online. The storyline of the show is great. Cast is also awesome. Overall this is the best show on television.