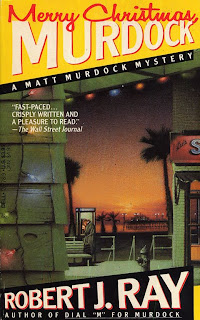 Merry Christmas, Murdock is the fourth novel written by Robert J. Ray to feature private eye Matt Murdock. Murdock is a former LAPD officer who feels and acts more like a college professor than a cop. He lives in a small bungalow on the beach and he owes more than just a little to John D. MacDonald's Travis McGee. His best friend, Wally St. Moritz, is a carbon copy of McGee's Meyer, and Murdock's personality and drive are reminiscent of the great McGee; he has astonishing luck with the ladies, he gets thumped more often than not, but he always finishes somewhere near the top. And now that I think about it, he has more than just a smattering of Jim Rockford.

It's Christmas, and Murdock's luck is running low; his last job didn't turn out as expected and his client won't pay. His girlfriend headed north, and it doesn't look like she's coming back. So he's home licking his wounds, cooking a gourmet meal and trying to forget about the holidays when his friend Wally St. Moritz--a surf shop-owning academic--telephones with a job. The daughter of a senator was the victim of a hit-and-run accident at the local shopping mall and the senator isn't satisfied with the efforts of the local law.
Murdock isn't crazy about the set-up--he and the senator, a sexy lady from , take an instant dislike to each other and the case isn't compelling. A simple hit-and-run doesn't exactly excite Murdock's sense of mystery, but he doesn't have any other clients on the radar so he hesitatingly takes the job. It leads him into places he never expected--from the parlors of the wealthy, to the teenage enclaves of the Xanadu mall, to the seedy boardwalk of a by-the-hour motel, Murdock tramples his way to an imperfect justice. A justice that is far from complete, but it's the best Murdock can do.
Merry Chrsitmas, Murdock was originally published in 1989, and it's lost little of its appeal. The plotline isn't original, but Mr. Ray freshens it nicely by adding a few unexpected twists and weaving two distinct but connected subplots into the story. The characters are top-notch, especially Murdock; his major weakness is referring to himself in third-person. The novel is seeped with muted working class angst and a baby-boomer vibe that create a cold and severe world with heavy doses of hope, duty, and even a whisper of destiny.
The work of Robert Ray may not measure up to that of John D, but as far as P.I. stories go Merry Christmas, Murdock is pretty good, and reading it not only gave me a window into my own past--I first read this one in the early-Nineties--it reminded me how much I enjoyed the genre as a kid. Heck, I even wanted to be a P.I. Imagine that.
A Note: I originally discovered the Murdock novels as a teenager when I stumbled across Murdock for Hire in the local library. It was a cold holiday season--sometime between Christmas and New Years--and I have a vivid memory of finding refuge in the warm sun. It probably took a blanket or two as well, but what more do you need than a good book, a terrific hero, and a few days off school?
The five novels that feature Matt Murdock are: Bloody Murdock, Murdock for Hire, Dial "M" for Murdock, Merry Christmas, Murdock, and Murdock Cracks Ice.

A Second Note: I've been having difficulties with my Internet service, and that's why it's been so quiet around here the past few weeks. I hope to have everything cleared up this next week. I hope.
Posted by Ben Boulden at 12:40 PM