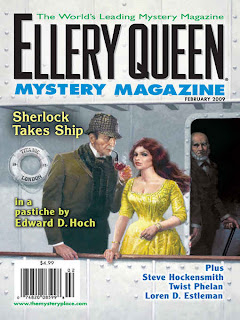 The latest issue of Ellery Queen Mystery Magazine arrived in the mail Friday, and as always it is a treat. I have the mail schedule pretty much pegged and I had been expecting it for a few days. Not that it was late, but rather I was impatient. It is the February 2009 issue and it is a celebration of Sherlock Holmes. But like always there is a broad array of high quality stories that will appeal to any and all mystery readers.

The contents are (I haven’t read all the stories yet--I try to savor every issue--so if there aren’t any comments it means I have been there yet):

“The Last Drop” by R.W. Kerrigan

“Greetings from Purgatory!” by Steve Hockensmith – Old Red and Big Red are back in a Sherlock Holmes-type adventure set in the old West; the thriving metropolis of Lovelock, Nevada. A can’t miss story that is whodunit, Western, and down right humorous.

“That One Small Thing” by Shane Nelson

“The Package” by Frank T. Wydra

“Wolfe at the Door” by Loren T. Estleman – An Estleman story is always worth the price of admission and this take on the Nero Wolfe mysteries is no exception.

“The Wilt of Love” by Michael Z. Lewin

“A Stab in the Heart” by Twist Phelan

“The Adventure of the Dying Ship” by Edward D. Hoch – This is a reprint of the late-EQMM regular and it is a dashing Sherlock Holmes story.

“Down to the Bitter Dregs” by Silvija Hinzmannn – This Passport to Crime story originates from a Croatian-born German. A terrific little tongue-in-cheek satirical revenge story. A great introduction to a foreign language writer.

It also includes The Jury Box by Jon L. Breen and Blog Bytes by Bill Crider. Another terrific issue that every mystery reader should make a point to pick up.
Posted by Ben Boulden at 1:54 PM